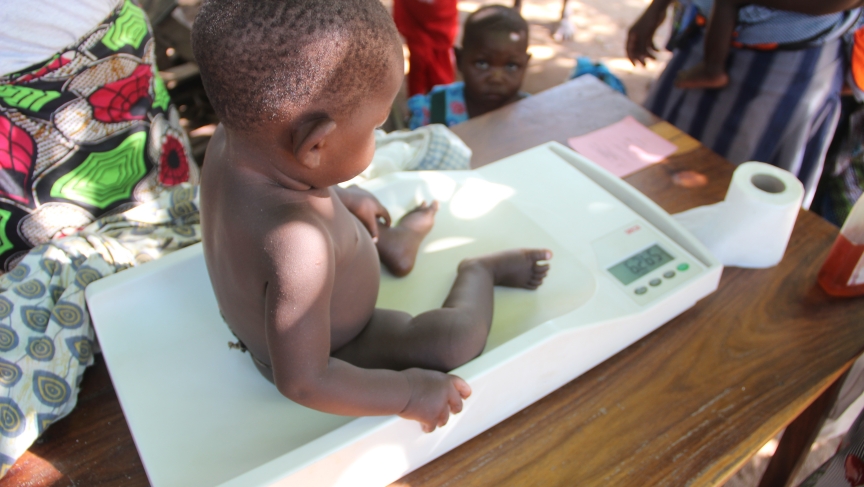 A child at a malnutrition clinic in Chikwawa, southern Malawi.

Near the town of Chikwawa in southern Malawi, dozens of mothers stood outside a rural health clinic, in the shade of a large tree. Among them was Modesta Roberts, 26, who had a small child with a thin blanket strapped to her back. Roberts looked concerned.

“My daughter is swollen all over her body,” she told me through an interpreter. “I’m worried about her health.”

Roberts handed her baby to Dr. Indi Trehan, a malnutrition expert from Washington University in St. Louis, who was conducting a research study on malnutrition. Trehan measured the baby’s height, weight, and arm circumference, and performed a visual inspection. He noted the child’s swollen feet and lesions on her thighs, and diagnosed the child with severe malnutrition.

Trehan asked Roberts to take her daughter to the next line, where a nurse provided the child with amoxicillin, a common antibiotic.

Last year, Trehan and his colleagues published a study in the New England Journal of Medicine that showed the immense benefits of the drug for severely malnourished children. Patients who received amoxicillin recovered at significantly higher rates, grew better and were nearly 40 percent less likely to die.

Exactly why the antibiotic works is unclear, but the findings were so compelling that the World Health Organization last November issued new guidelines for the treatment of severe malnutrition. The WHO said children should be given amoxicillin or a similar antibiotic, along with therapeutic food, as soon as they are diagnosed with severe malnutrition.

But putting those recommendations into practice is not so easy, said David Sanders, a malnutrition expert at the University of the Western Cape in South Africa. “Often the children who are the most severely malnourished are the ones living in the remotest areas, or in the poorest areas, with the poorest infrastructure,” he said.

In the absence of big, international organizations like UNICEF or Doctors Without Borders — or well-funded foreign research teams like Trehan’s — getting antibiotics to these areas is extremely difficult, Sanders said. “More often than not, the drugs never arrive, either because people at the central level have run out of stock, or people at more peripheral levels haven’t ordered in time, or stuff hasn’t been delivered, or it’s gone missing, and so on and so forth.”

I witnessed these problems at a rural clinic in Malawi. A community health worker, who agreed to speak with me only if I did not use his name or the clinic’s name, said it had been months since the clinic had received a shipment of amoxicillin. “We haven’t received any supply of drugs, so we are still waiting for the coming of the antibiotics,” he said.

In the meantime, his staff had begun giving malnourished children a different antibiotic — Cotrim. It is often prescribed for pneumonia.

There is just one problem: Cotrim does not work on malnutrition, or it probably does not work, said Indi Trehan.  He said Cotrim has never been tested on malnourished kids, and he doubts it would help because it does not target the kind of bacteria that are linked to malnutrition.

In fact, some fear the overuse and misuse of Cotrim could actually cause harm.

Dr. Stuart Levy is a professor at Tufts University in Boston and head of the Alliance for the Prudent Use of Antibiotics. Levy led a study in Uganda where, he said, Cotrim was being overprescribed for a wide range of health problems.

“What happened was resistance rose in the 90 percent range,” Levy said. In other words, the drug lost its potency because bacteria became resistant to it. Levy fears the same thing will happen in Malawi and other places where Cotrim is used to treat malnutrition, and it will become difficult for health workers to treat basic infections like pneumonia.

“You’re going to have a situation where all these kids are dying of pneumonia, because [the bacteria] have become resistant,” Levy said.

Dr. Trehan said he shares this concern, but he thinks the Malawian government will start getting the right drugs to the right kids soon. “The emphasis on nutritional care is growing, and amoxicillin is being more recognized as a component of that care.”

He said the question that remains is whether other governments will follow suit and, if so, when.