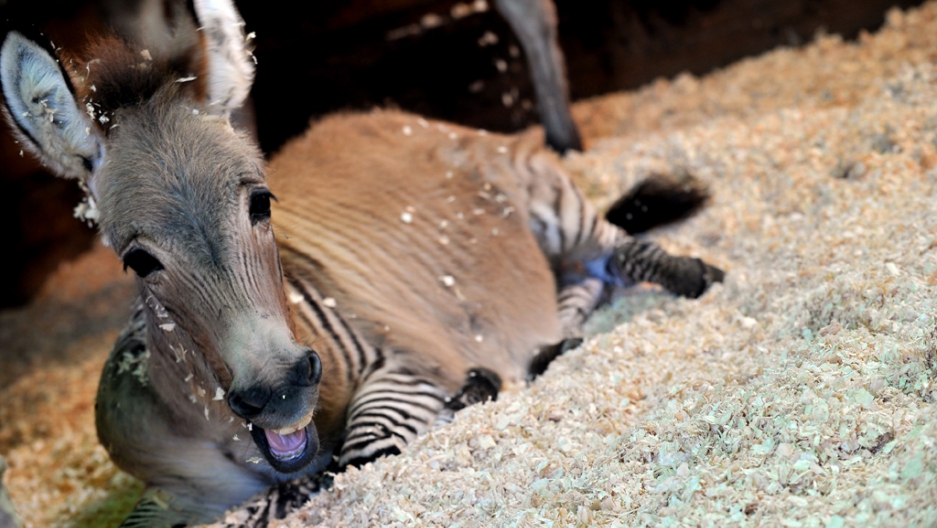 A zonkey, a cross between a zebra and a donkey, in Florence, Italy on Oct. 11, 2013.
Credit: Tiziana Fabi
Share

If this zonkey looks happy, it's because he's alive.

He's one of just a few such zonkeys, or zebra-donkey hybrids, that exist in the world today — though it's not for lack of trying.

The chances that a zebra mating with a donkey will result in offspring are slim because the two animals don't have the same number of chromosomes. It can happen, but it's rare.

Which is why Khumba, the world's newest zonkey, was given an especially fancy pair of tights when he was born last week in Mexico. Behold:

Khumba is the product of a love affair between a donkey named Ignacio and a zebra called Rayas. The two would "visit" each other every afternoon at Reynosa Zoo in Mexico City. So that's what we're calling it.

Zonkeys are a genetic rarity

Zebras have often been paired with various members of the equine family, but a donkey-zebra hybrid is particularly rare. Why? Because a donkey has 62 chromosomes and a zebra has anywhere from 32 to 46. Not all the combos of genes facilitate embryonic development to birth, so it's a bit of a crap shoot. Female hybrids are rarely fertile and male hybrids are usually sterile. Boo.

A zonkey by any other name

Zonkey is as donkey does (and zebra looks) As far as appearance, zonkeys resemble their donkey parent (usually the mom) physically and their zebra parent (usually dad) in all things fashion. In other words, zonkeys are basically striped donkeys.

Charles Darwin wrote about zonkeys in the "Origin of Species" (1859), so we know that there were at least some around then. And a man by the name of Lord Morton experimented with hybrid horses as early as 1815.

Aside from an interest in genetics, early scientists were keen to breed pack animals that were resistant to sleeping sickness, which afflicted purebred horses.

Meet Ippo! He's a zonkey who was born in Florence, Italy, in 2013. Here, he is pictured eating next to his donkey mama. Alex the zonkey was born to a zebra mother and a donkey father — an even rarer pairing — in Barbados in 2005.

Will the real zonkey please stand up?

Imitation is the highest form of flattery. At least that's what zonkeys keep telling themselves about Tijuana zebras. These guys are white donkeys painted with stripes to look like zebras, and they are quite common in Tijuana, Mexico. Apparently, folks first painted them so they wouldn't blend in with the background in photos. And a star was born.

Now you can be a zuman, too

All you need are a sweet pair of these.