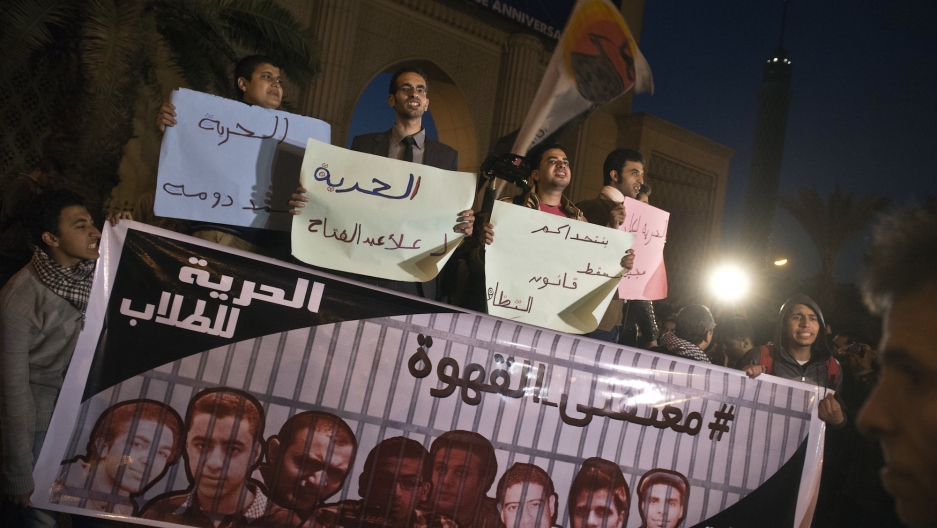 CAIRO, Egypt — Using their grassroots network to disseminate a call for revolution, the members of the April 6 Youth Movement played a key role in the 2011 uprising that ousted Egypt’s 30-year dictator Hosni Mubarak.

But those heady days feel like a distant memory for the group’s members. On Monday, a court banned the movement’s activities on charges of espionage and harming Egypt’s image. Now the youth of April 6 have entered a new, more dangerous phase.

Human Rights Watch condemned the court’s decision, saying it sends the message to April 6 — and other opposition movements — “that there is no place for dissent and for protests in today’s Egypt.”

This is just the latest blow to the group. Co-founder Ahmed Maher is already behind bars serving a three-year sentence for protesting without government approval.

Ramy Sayed, the group’s fresh-faced 25-year-old mobilization coordinator, said the current oppression they face makes Mubarak’s time look mild by comparison. “The regime of Mubarak thought we were some kids playing, so let them play. Now we’re not kids.”

The left-wing group formed to support a worker’s strike in a Nile Delta town on April 6, 2008. Their focus is populist: for example, setting a minimum and maximum wage and opposing price increases to basic food items and gas. Many of their officers are young professionals. Sayed works at an internet café and in public relations for a makeup company, while the general coordinator for Cairo is an internal auditor.

Last summer April 6 took part in mass protests against elected President Mohamed Morsi, who hailed from the Muslim Brotherhood. The military then ousted Morsi and installed a new government, a move Morsi’s supporters call a coup. The new military-backed regime now sings the praises of Egypt’s “two revolutions” and vows to protect them.

In fact, Monday, on the same day that Egypt banned one of its largest and most effective youth movements, Egypt’s Foreign Minister Nabil Fahmy lauded the role of young people in Egypt’s “revolutions.”

“The desire for youth to determine their own future was, I think, the instigating force,” Fahmy said in a speech at a Washington, DC think-tank. “They were calling for and remain calling for better governance, more accountability, more transparency, and that’s why we are going through this political process.”

But Issandr al-Amrani from International Crisis Group said that amid a “growing, continuing authoritarianism,” newer political forces like April 6 are marginalized while members of the old guard are appointed to top government positions.

Egyptian prominent activists Ahmed Douma, right, and Ahmed Maher, the founder of the April 6 youth movement that led the revolt against ousted President Hosni Mubarak, stand in the accused dock during their trial in the capital Cairo on April 7. (Hassan Mohamed/AFP/Getty Images)

Meanwhile, he said, the Egyptian media “seems to be gunning for these youth activists and depicting them as either not loyal to the new order, or as potential Trojan horses for the Muslim Brotherhood, or as troublemakers and people responsible for the insecurity and upheaval over the last few years.” April 6 denies the claims that it takes foreign funding, printed regularly in the regime-friendly press and a frequent accusation used here to discredit political opponents.

“Right now their bet is that we’ll be afraid,” said Mohammed Nabil, 32, the group’s general coordinator for Cairo. Instead, the group plans to mock the court ruling by protesting in clown costumes in downtown Cairo tomorrow.

Nabil said the movement has been smeared by each successive regime since 2011 — at first a council of ruling generals, then a democratically elected Islamist president, and finally the current military-backed one. The group initially cast its lot in with each government, but then became critics following repressive measures.

“You can say that we are naïve. We listened to a lot of promises,” said Nabil.

Practically speaking, it’s not clear to Nabil what the court’s decision will mean for the organization. The verdict calls on security forces to seize the group’s headquarters. Nabil said the members usually hold meetings in coffee shops — their only “headquarters” is a spartan rented apartment with a few chairs and a table used for press conferences. He shrugged his shoulders. “If they can find it they can take it away.”

Though he recognizes the growing dangers, Sayed is determined to continue his activism. His best friend was killed by the military; hundreds of others languish in jail cells. If he abandoned the movement now, he said, “How could I look at myself in the mirror?”

But Sayed said it’s harder to mobilize others to protest, given the risk of prison time and hefty fines. And the repeated accusations against the group have frayed its relationship with the broader public.

On Saturday, April 6 joined a group of other political forces in an illegal march to the Presidential Palace, protesting against the law banning demonstrations unapproved by the government. Hundreds turned out, weaving through avenues lined with cafes and upscale shops. At points, the iconic slogan of the 2011 uprising — “The people want the fall of the regime!” — rang through surrounding streets. The activists at the front of the march walked with fencing to represent prison bars; those directly behind them carried photographs with the faces of prominent detainees.

The protest was a far cry from the thousands-strong marches that have regularly flooded Egyptian streets since 2011. But for Nabil, it was significant to simply reach the gates of the Presidential Palace — if only for a few minutes.

He paused and looked down. “As a revolutionary, this is a disappointing phase. We don’t have the sufficient power to resist.”