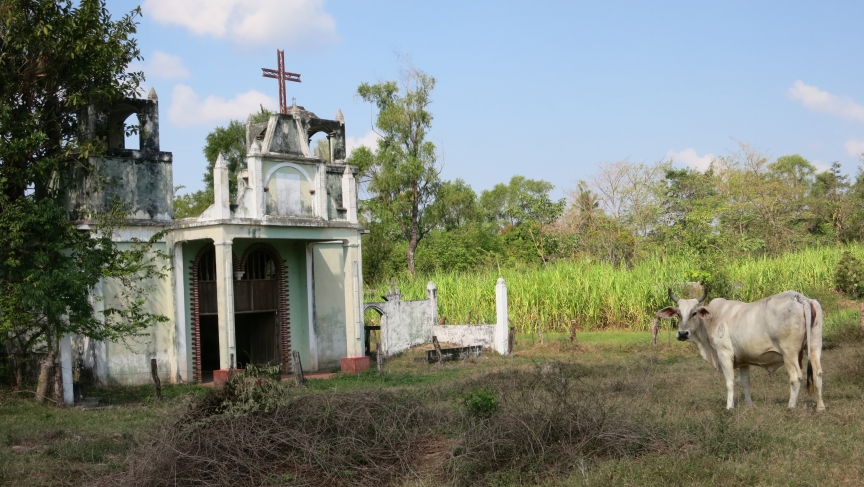 The ruins of the town of Valdivia in the southernmost Mexican state of Chiapas. The town was destroyed by a tropical storm in 1998.

When we hear about climate change, “adaptation" is one word that usually finds its way into the conversation. But it's a term that means different things in different parts of the world.

For southern Mexico, Honduras, and Guatemala, adaptation means experimenting with the best and most cost-effective ways to prepare for stronger tropical storms and hurricanes. The area has long been one of the most susceptible spots on the planet and, as ocean temperatures rise, climate scientists predict storms will grow more intense. In fact, there are indications that the number of category 4 and 5 hurricanes is already increasing.

Residents from the small community of Valdivia — in the southernmost Mexican state of Chiapas along the Guatemalan border — know all too well about the destructive potential of intense storms. All that’s left today of the town are shells of concrete buildings amidst the weeds. In 1998, Tropical Storm Javier swept across Chiapas and literally wiped the community of 4,000 off the map.

I met Joel Garcia Vasquez grazing his cows in front of the ruins of a church. He said the church served as a refuge during the storm. He and others huddled on the rooftop when the river, about a mile away, flooded. Garcia said the water was about 10 feet high for 10 days. Thirty residents died and another 50 or so bodies floated by from upstream, by his rough count.

When it was all over, rather than rebuild the town, the government helped the people of Valdivia start over on higher ground. They named the town Nuevo Valdivia, or New Valdivia. I asked Vasquez how he feels grazing his cows among the ruins of his childhood home. His answer took me by surprise.

“The new town is a little better because we’re getting more help from the government,” he said.

It’s part of the Mexican government’s efforts to address the threat of climate change in southern Mexico, as tropical storms become more frequent and intense here. But moving entire towns out of harm’s way, that costs a lot of money.

“This is not possible for all the towns,” said Alejandro Hernandez, a watershed biologist with The Nature Conservancy in Chiapas.

Hernandez said the Mexican government — state and federal — still spends too much time and money reacting to the effects of floods, instead of the causes. He looked up at the Sierra Madre de Chiapas mountain range in the distance, pointed, and said that’s where more work is needed. Because when the storms come, the water comes gushing down from the hills.

“The quantity of rain, we couldn’t stop that,” said Hernandez. “But we could improve what kinds of activities that are good or bad to protect the forest. Our main focus is to work with people to create more capabilities to face the new challenges of climate change.”

Hernandez took me on a drive into the mountains up a steep, curvy, bumpy road. Every 20 minutes or so, we passed a small village, impossibly built on a sharp hillside. After an hour, we arrived at the village Toquian y las Nubes, or Toquian and the Clouds.

Toquian sits at nearly 5,000 feet, less than a mile from the Guatemala border. During our drive, the weather went from blisteringly hot to cool and foggy. We got out of the truck and were greeted by subsistence farmer Aquino Sanchez. He cultivates coffee, bananas, cabbage, and tomatoes. His grandparents helped found this village in the 1930s.

Sanchez said the weather has been doing funny things, and he’s been having a harder time with some crops. His coffee won’t grow at all — his trees are bare, wiped out by the fungal disease La Roya, which thrives in the new warmer and wetter conditions here. The fungus infected more than half the coffee trees in Mexico and Central America last season, costing the industry an estimated $1 billion.

“The climate, I remember before, from November to April, it never rained. But now, last year, we had a lot of rain,” said Sanchez.

Sure enough, as if on cue, it started to rain. We took shelter under a healthy coffee tree, one of a new, heartier variety provided by local NGOs and government workers.

Sanchez also showed me his new “live barriers,” terraces of bushes and trees planted along the steep hillsides to retain soil. The roots help prevent mudslides and soil erosion. Locals are also given money to preserve existing trees, rather than cut or burn them. These changes are helping here up in the hills, while also reducing flooding down below.

Now, not to spoil the party, but none of this sounded that, well, dramatic. Alejandro Hernandez, with the Nature Conservancy, said that’s the point.

“This small thing, done in a lot of quantity, we could improve many issues,” he said.

Hernandez acknowledges, sure, the government, NGOs and others working here could build expensive things like levees and concrete walls to keep potentially vulnerable communities safer, but The Nature Conservancy, in partnership with local NGOs, wants to show that an ounce of natural prevention can go a long way to improve the region’s resilience to climate change.

And they hope these pilot projects will be examples used throughout Chiapas, Guatemala, and Honduras — areas that are increasingly vulnerable to the impacts of climate change, namely more intense storms.

Hernandez acknowledged, though, coming into remote rural communities like these and telling people to change the way they’ve always done things isn’t always so easy.

That’s what the farmers I met here all said. As the climate changes, they’re willing to change, too. For those who have already lost their crops or homes, it’s really not much of a choice.