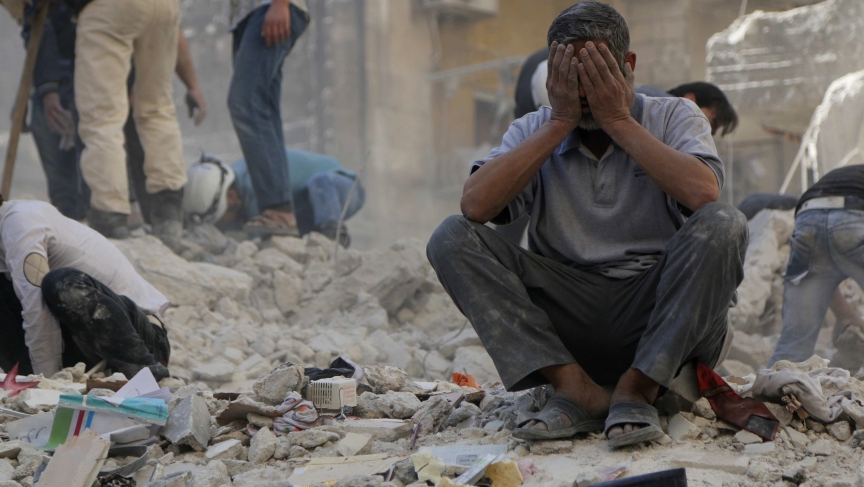 A man sits amid debris after an apparently random air attack by forces loyal to Syria's President Bashar al-Assad in Aleppo earlier this week.

The civil war in Syria is as violent as ever. On Tuesday, a typical day, twin car bombs hit the city of Homs, killing about 40 people. Mortars, meanwhile, rained down on part of the capital, Damascus, killing 14 in a school complex. International investigators agreed to check out reports of a new chlorine gas attack.

As violent as it is, it's not at all unusual. It's indicative of what the future has in store for the war-torn country.

"Syria is headed for more violence, for a long time, with nobody doing anything about it," says Liz Sly, Middle East correspondent for the Washington Post. She's just returned to Beirut from a reporting assignment with rebels inside Syria.

There are three main reasons for the stalemate:

The rebels remain riven with factions. Groups split off from each other because of differences in ideology or priorities, or because of old-fashioned personality differences. Last year, open fighting erupted between mainstream rebel groups and an increasingly powerful jihadi faction.

But Sly had to travel alone. She was not allowed to bring a local fixer, driver or translator. The rebels were worried such a person might betray their secrets to other rebels. “They didn’t mention the government in that regard,” Sly says.

“So there’s a lot of rivalry; a lot of disunity,” says Sly. “It’s a huge thing, and they’ve got to overcome it if they’re ever to have any hope of succeeding.”

Harakat Hazm recently received a shipment of US-made BGM71 TOW anti-tank missiles. It’s one of the first shipments of relatively sophisticated US weapons to Syrian rebels. They were funnelled in through third-party "friends of Syria." US officials told Sly they knew about the shipment and did not oppose it.

However, it’s unlikely to be a game-changer, Sly says. There were only about a dozen missiles in the shipment, and they’re not very modern.

“What we’ve seen,” says Sly, “is that the West has allowed just enough weapons to reach the rebels to stop them being defeated.” She says the West does not want the rebels to win, but to negotiate.

That has left Syrian rebels feeling very bitter, and has sparked multiple conspiracy theories. "The idea that the United States isn't all that interested or doesn't want to get involved, doesn't occur to them," says Sly.

Incredibly, Syria is heading for a presidential election on June 3. But Sly says nobody is taking the election seriously. Few Syrians will be able to vote, at least freely. Sly says it will probably be a way for President Bashar al-Assad to tell the world he still commands support.

“It’s not an election that will resolve anything,” she says. Political accommodation looks as far away as ever.

So the stalemate in Syria looks set to continue, says Sly. “That’s basically what we’ve seen for the past three years and that’s what we’re probably going to see for the next three years.”