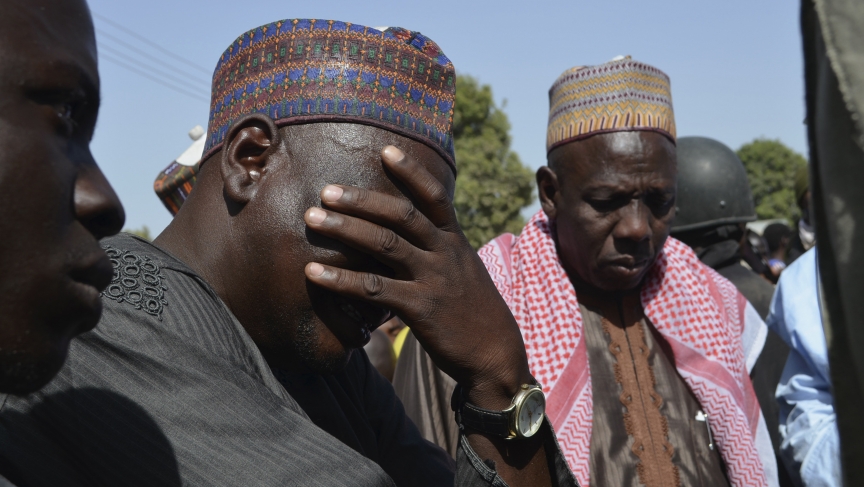 A man weeps with parents of kidnapped school girls abducted by Islamist militants. Some 230 girls are still missing, a much higher figure than authorities originally said had been kidnapped.

Imagine your daughter heads off to school one day. You think she's safe. But later you find out that she and hundreds of her classmates were loaded onto vehicles and abducted.

That's what happened to some 230 schoolgirls in northeast Nigeria two weeks ago.

They're believed to have been kidnapped by members of the Islamic insurgent group Boko Haram during a night raid on a boarding school in the remote town of Chibok.

Since then, there's been no official word on the girls' fate. But local leaders in northeastern Nigeria say there have been recent reports of the girls being taken across the border into Chad and Cameroon.

The girls' parents are growing increasingly angry at Nigeria's government for failing to rescue them, according to Nigerian writer Adaobi Tricia Nwaubani in the capital Abuja. She says the lack of concrete information about the abducted girls has all of Nigeria feeling on edge.

"These are innocent children, girls, who went to school that are going through this," Nwaubani says. "The people who need the most protection from us. So we feel the horror in a new way that we haven't before."

At the same time, Nwaubani points to aspects of the tragedy that are uniting her country. She says Nigerians are not concerned about whether the girls are Christian or Muslim, or from different ethnic groups.

"We have the responsiblity to tell these stories to the world and get the world interested," she says.

During the kidnapping, 43 of the girls managed to escape from their captors after some of the militants' vehicles broke down. Most of the abducted girls are between 16 and 18 years old, and had been taking their final exams at the school.