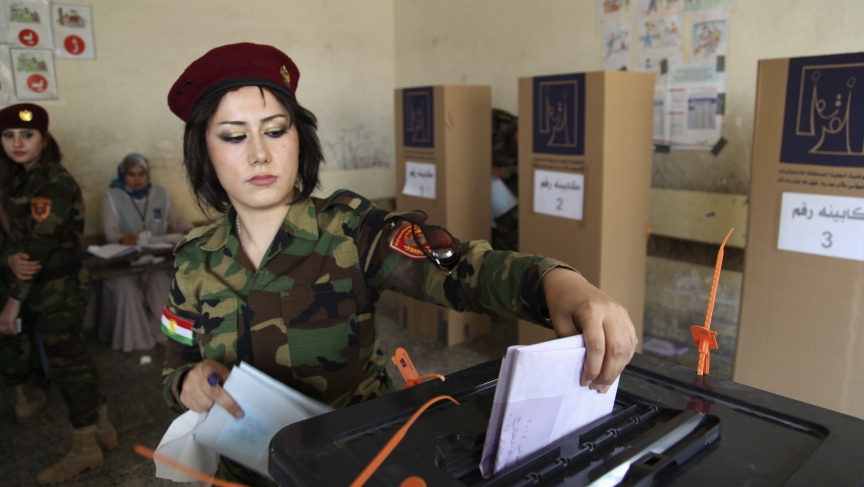 A member of Kurdish security forces casts her ballot inside a polling station during early voting for the parliamentary election in Irbil, in Iraq's Kurdistan region, on April 28, 2014.

Americans may remember the first time they saw images of Iraqis emerging from voting booths with purple-inked fingers held aloft. It was 2005, less than two years after the US-led invasion.

The images were a testament to the nation's progress on the road to democracy.

This week, Iraq holds another election — its first national vote for parliament since the US troop withdrawal of 2011. More than 10,000 candidates are contending for 325 seats.

There are certain to be more pictures of purple fingers. But optimism about the future of Iraq will be harder to come by during this round of voting, as it will take place in the midst of a deadly spasm of sectarian violence.

Most of the victims are Iraqi civilians. About 1,000 died in February, mostly killed in the fighting between Sunni insurgents and government forces in Iraq's western province of Anbar or in the relentless tide of suicide bombings in and around Baghdad. On Tuesday, bombs went off in a market in the Iraqi capital, killing at least 17 people.

Pull back, and the toll is staggering: 7,818 civilians perished from political violence in Iraq last year, according to the United Nations.

The BBC's Kevin Connolly attempted to get at the human impact of all this violence by asking each of the Iraqis he interviewed the same question, "How many people do you know personally who've died in political violence?'"

In a cascade of voices Connolly used in a recent radio report, one Iraqi man says he knows several hundred people killed, and another says he has lost around 15 people between friends and family. A woman says she has lost three relatives, including her dad, brother and sister. Connolly spoke with a cafe owner in Baghdad who lost five sons in a bombing that injured his wife, who then died two years later. A Baghdad trauma surgeon told Connolly that he sees injuries and deaths every single day.

“I suspect that you could have got very similar answers from almost any other group of Iraqi people,” Connolly said from Baghdad. “You feel like wherever you turn, there are blighted lives here.”

Connolly described attending a recent political rally for an Iraqi Shia organization with candidates running for office, at which a car bomb exploded shortly after the BBC team left the event. It killed about 30 people and wounded around 100 others. “Wherever you look,” Connolly said, “the evidence is of a country in the grip of an extraordinarily dangerous and violent wave of sectarian killing. There seems to be no end to it.”

One thing that fails to show up in the statistics, Connolly said, “is just a general atmosphere of uncertainty.” He said the Sunni insurgents behind most of the bombing attacks seem to be consciously attacking the sense of security that people need to go about their daily lives with any semblance of normalcy.

There is an “edgy and fearful atmosphere here and that's something that faces Iraqis every time they go to the market or wait at a bus stop. That eats away at any sense of well-being, sense of comfort, sense of happiness.”

Connolly said Iraqi security forces are going to extraordinary lengths to try to restore that sense of normalcy ahead of the election, set for April 30. The international airport in Baghdad is closed. The main roads in and out of the capital city are closed.

“If there is a substantial turnout here, it will be a remarkable testament to the stoicism of the Iraqi people,” he said.