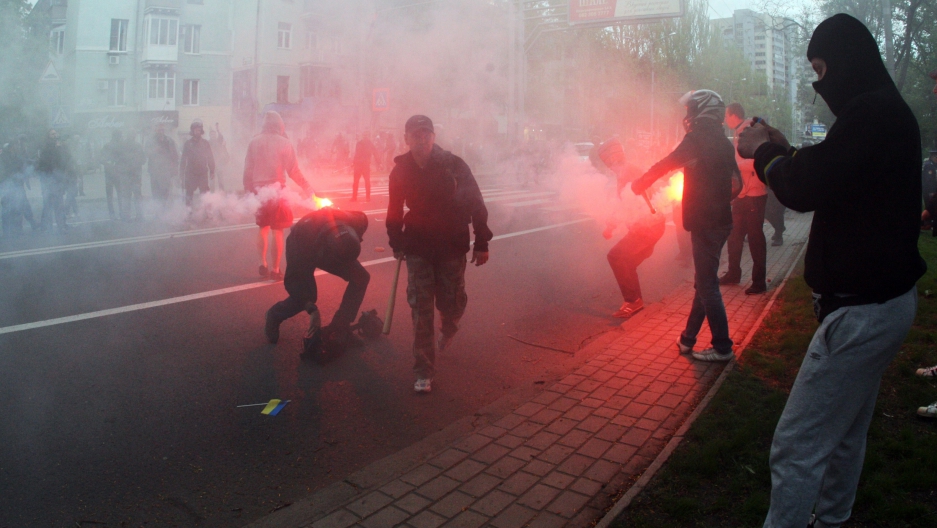 DONETSK, Ukraine — A rally by pro-Ukraine supporters here on Monday night got off to a smooth start.

Hordes of armored police were dispatched to guard protesters as they marched peacefully down the city’s main street.

But when pro-Russian thugs wearing masks and brandishing crude weapons caught up to them, mayhem ensued. The tight police cordon peeled away, leaving the pro-unity protesters open to vicious beatings.

Observers say a mix of pervasive corruption, split loyalties and sense of self-preservation is to blame.

“There’s no motivation to honestly carry out their duties,” says Oksana Markeyeva, a security expert in Kyiv who researches police issues.

One by one, rebels have stormed key strategic assets in cities such as Slovyansk and Kramatorsk, where an atmosphere of lawlessness now pervades. Heavily armed rebels roam with impunity as reports of mysterious kidnappings are growing.

In Kharkiv, Ukraine’s second-largest city, at least two pro-Ukraine rallies were violently broken up by pro-Russian assaults in the past three weeks. Attempted seizures of the regional administrative building there prompted Interior Minister Arsen Avakov to fire around 30 percent of the police force.

Ivan Varchenko, a Kharkiv councilman from the pro-government Fatherland Party, says the new, revolutionary conditions in Ukraine have caught a largely corrupt and underprepared police force by surprise.

He partly blames ousted President Viktor Yanukovych, whose support base was in the Donetsk Region.

“In reality, much of the police force we have in Ukraine today was oriented toward several specific activities: to defend the Yanukovych ‘family’ and protect oligarchs’ businesses,” Varchenko, a member of the council’s human rights committee, said in a recent interview.

“They understood that they were perfectly suited to that — to pressure local businessmen into paying bribes, for instance,” he added. “But now when they need to be fighting bandits, they’re showing their inability.”

The problems are rooted in years of deep-seated corruption among Ukraine’s police force, which regularly ranks among the country’s most corrupt institutions.

Markeyeva, the police expert, says such high levels of corruption have come from a vicious cycle in which officers are mostly concerned with supplanting their meager salaries with kickbacks.

Observers suggest the problem is most acute in Donetsk, Ukraine’s traditionally pro-Russian industrial heartland, where many officers appear to have openly sided with anti-government protesters.

Loyalty to one’s region runs deep here, where most locals denounce the revolution in Kyiv as a nationalist-backed “coup” that overthrew a legitimately elected president.

They also revere the once-feared riot police known as the Berkut for their role in attempting to beat back the protesters on Independence Square, the nerve center of the Kyiv uprising in February.

“The only thing they refuse to do is to carry out their professional activities against those who’ve come out to support them,” he says of the pro-Russian protesters, “whom the authorities are making out to be separatists and terrorists.”

That sense of loyalty appeared to play out last weekend after anti-government protesters seized the regional state television headquarters and met little or no resistance.

Officers stationed on the scene said they were dispatched there to maintain order. But one of them, a Berkut veteran who identified himself as Vitali, said he “didn’t see a point” in attempting to use force.

He said they would probably ignore an order to disperse protesters.

“People will come out and it’s unclear what will become of us after we use force,” he said. “We live in this region, and many our friends, acquaintances, brothers and sisters are in the crowd.”

On Monday night, at least one riot police officer in Donetsk appeared to march alongside pro-Russian thugs who had just violently broken up the pro-Ukraine rally.

Afterward, the anti-government protesters returned shields they appeared to have borrowed from the police as officers coordinated the collection.

On Tuesday, after separatists seized the regional administration in the neighboring Luhansk Region, police there offered no resistance and later defected to the rebels, the Ukrainian news agency UNIAN reported.

But not all law enforcement officials have sat idly by.

Pro-Ukraine activists have hailed Andriy Krischenko, a police chief in the eastern city of Horlivka, as a hero after he was among the last men standing during an attempt to fend off separatist rebels who’d stormed the police headquarters there earlier this week.

He was badly beaten by the protesters.

Markeyeva believes much of the police force in eastern Ukraine would also fulfill their duties under pressure if years of stalled reforms in the law enforcement sector hadn’t failed to create incentives for the underpaid and demoralized officers.

“I think that if there was a clear choice of behavior, most people would chose the norm that allows them to live honestly and in stability,” she says. “But the conditions for this aren’t there.”