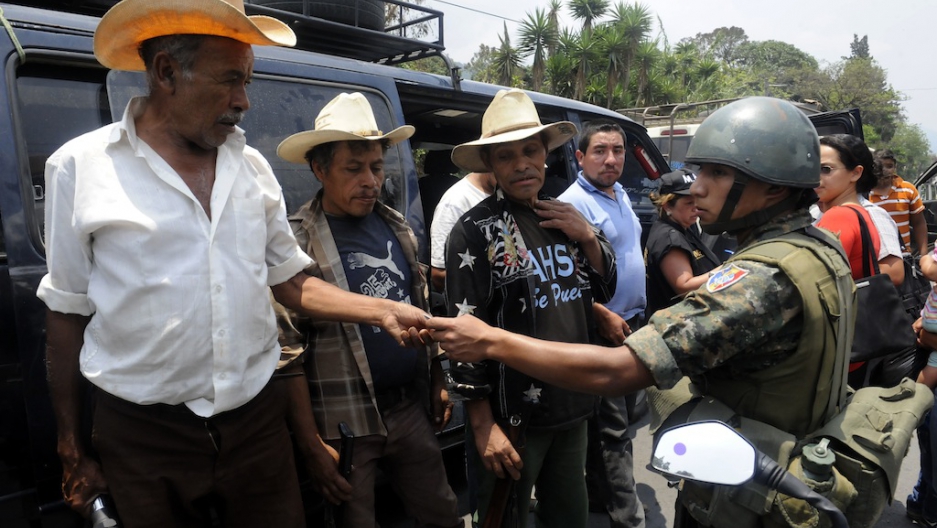 A Guatemalan soldier frisks a driver at a checkpoint on a road in Mataquescuintla municipality, Jalapa departament, 125 km southeast of Guatemala City on May 2, 2013. President Otto Perez Molina ordered a state of siege for 30 days in four municipalities in southeastern Guatemala just days after security forces clashed with opponents of a Canadian-owned gold and silver mine project who had taken 23 officers hostage.
Credit: JOHAN ORDONEZ
Share

SAN RAFAEL LAS FLORES, Guatemala — Late on Sunday April 13, Edwin Alex Reynoso and his daughter Merilyn Topacio Reynoso were attacked by gunmen on their way home from a community meeting.

Topacio was killed, her father seriously wounded. Both were active members of the resistance movement against the Canadian-owned Escobal silver mine in San Rafael las Flores, a couple of miles away from where the attack took place. The violence occurred just barely one week after six members of another indigenous community, who are fighting a hydroelectric project, were shot.

These are the latest in a long line of violent attacks targeting hundreds of rural and indigenous communities across Guatemala who are fighting an onslaught of resource-exploiting mega projects — mining, hydroelectric, oil and industrial African palm plantations — which are promoted by the government and investors as development.

Guatemala’s metal mining sector has grown seven-fold since 2006, and the administration of President Otto Pérez Molina granted more than 100 mining licenses during its first 18 months in power. There are also more than 50 hydroelectric projects at various phases.

The Escobal mine — operated by Tahoe Resources, a company that in April 2013 was granted a 15-year license to mine silver, gold, zinc and lead over 12 square miles — is slap bang in the middle of an agricultural region where most people eke out a living from cultivating coffee, maize, vegetables and cattle ranching.

The vast majority of local people are opposed to the project amid fears of long-term water contamination and health impacts. They also reject Tahoe’s environmental impact assessment, correspondingly criticized by two independent reviews, which claims the project will have zero impact on water sources.

Among those most strongly opposed are Guatemala’s Xinca indigenous people, a non-Maya ethnic group, who live in communities surrounding the Escobal mine.

The right of Guatemala’s indigenous people to “free, prior and informed consent” about projects on their territory is enshrined in the legally binding International Labour Rights Organisation's Tribal and Indigenous Peoples Convention (ILO 169) and the United Nations Declaration on the Rights of Indigenous People.

Since 2005, more than one million people in more than 75 community referenda have voted overwhelmingly to reject mega projects in their territory, but the results have been ignored by the government and companies alike.

In a ground breaking decision last December, the Constitutional Court ruled that a community consultation carried out in 2012 under municipal law in Mataquescuintla, where 96 percent of people rejected the Escobal mine, was legally binding. Despite the ruling, work continues at the mine.

Moisés Divas, member of the Xinca Parliament, which represents 15 Xinca communities, said: “For us these mountains, forests, soil and water are sacred, that’s why we have looked after them for generations. Neither the company nor the government has a mandate to mine in our territory. The people have made their views clear: we do not want any so called development that contaminates our natural resources. We are prepared to fight for as long as it takes the government to listen.”

The Escobal case is far from unique. Members of several communities told GlobalPost that they were unaware their territory had been sold until machinery and security guards working for mining or hydroelectric companies appeared overnight.

On April 7, 2014, in the tiny hamlet of Nueve de Febrero, department of Alta Verapaz, six Q’eqchi Mayans were shot, including a pregnant woman, a few meters from the Dolores River where community members are fighting a hydroelectric project. One of the injured, Julio Cuc, died in the hospital on April 20.

The shooting occurred during a meeting called by representatives of the locally owned company Hidro Santa Rita. The company was granted permission without any consultation with local communities, who would be forced to leave their homes and farmland if the project goes ahead.

Nationally, the violence has been accompanied by a dual strategy aimed at dividing communities by offering some families jobs and money, and implementing arbitrary criminal charges on others.

Dozens of community leaders who actively oppose mega projects are facing dubious criminal charges including terrorism, communism, kidnap, aggravated assault, and property damage. Most are eventually exonerated, but not before suffering serious physical, psychological and financial hardships as a result of drawn out, expensive legal battles.

After the Escobal mining contract was awarded to Tahoe Resources in April 2013, people took to the streets and set up a peaceful resistance camp outside the mine.

Six protesters, including a 17-year-old boy, were shot by the company’s security guards. Tahoe’s then head of security Alberto Rotondo, who allegedly ordered the attack, was arrested while trying to leave the country and is currently awaiting trial.

A few days later on May 2, 2013, President Molina, a military commander during the civil war, declared a 30-day state of siege in communities surrounding the Escobal mine, drafting in 4,000 troops and suspending constitutional rights. It was his second state of siege since taking up office in January 2012. Five community protestors arrested during the siege spent several months in jail before being released without charge.

Indigenous Guatemalans, who account for 40 percent of the population, are once again bearing the brunt of the state’s oppressive policies as most mega projects are earmarked for their territory.

Of the 200,000 people killed and forcibly disappeared during the 1960 to 1996 civil war, 83 percent were indigenous Maya and 93 percent of abuses were perpetrated by government forces, according to the UN sponsored Historical Clarification Commission.

Jeronimo Chen Osorio, from the human rights group Puente de Paz, or Bridge of Peace, survived the 1982 Rio Negro massacre in which 444 Achi Mayans, including his father and eight siblings, were murdered to enable construction of the Chixoy dam.

“Back then they justified the killings, forced evictions and militarization of our communities by saying we were guerrillas. Nothing has changed, except now they call us terrorists and drug traffickers,” he said.

Mining companies pay the government only one percent in royalties — the lowest rate in Latin America – making it extremely attractive to foreign investors.

Canadian companies account for 90 per cent of all mining in Guatemala.

Globally, they are linked to a third of all mine-related environmental and human rights abuses, community conflicts and unethical behaviors, according to industry sponsored research leaked to the Canadian press in 2010.

In July 2013, the Superior Court of Ontario ruled that Canada was the right jurisdiction for Hudbay Minerals to face civil claims related to alleged violent incidents against Q’eqchi Mayans involving security guards at its former nickel mine in El Estor, in the eastern department of Ixabal.

The precedent-setting ruling means Hudbay will face trial on home turf for the 2009 murder of land rights defender Adolfo Ich, the shooting and paralysing of German Chub on the same day, and the 2007 gang rape of 11 women during a forced eviction.

“My life was destroyed with one bullet,” Chub told GlobalPost. “And now I pray God gives me the strength to defend myself and fight for justice in court.”