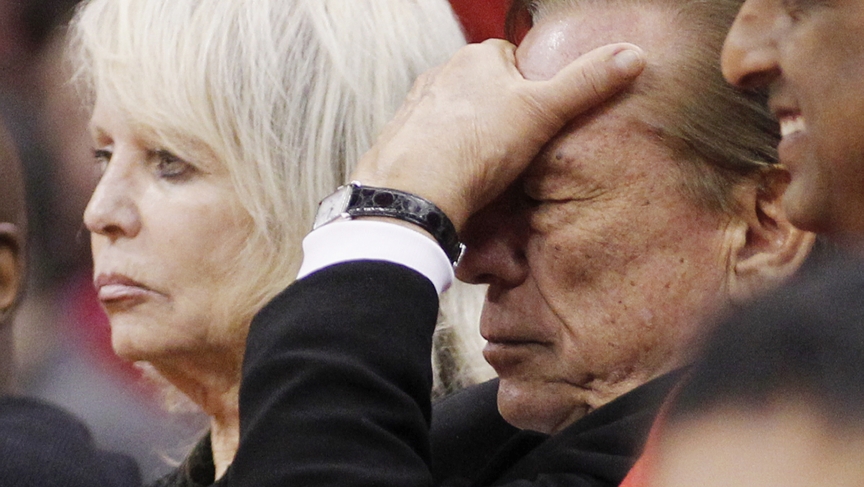 Los Angeles Clippers owner Donald Sterling, right, puts his hand over his face as he sits court-side. The NBA is weighing penalties against the owner after he allegedly said that he does not want black people to come to his basketball games.

They eat and breathe soccer in Italy. But they also love basketball — especially the NBA.

That means many Italians are closely following the controversy swirling around the Los Angeles Clippers after a tape emerged of a man, purported to be Clippers owner Donald Sterling, making racist comments. Sterling is accused of telling his girlfriend to stop appearing with black people in social media photos, and not to bring black people, include NBA Hall of Famer Magic Johnson, to basketball games.

The story has particular resonance because of Italy's own problems with sports and racism.

Bananas are often thrown at black players. The top player on Italy's national team, Mario Balotelli, has been a frequent target of such antics.

Massimo Oriani, who covers US sports for La Gazzetta dello Sport, a major sports daily in Milan, met Clippers owner Sterling a couple of years ago. He wasn't impressed.

“Sterling is not the kind of guy you expect to meet in such a position,” he says. “He gives you the impression of what he actually is: a racist.”

Oriani says most people in Europe didn't know Sterling before this weekend. And everyone was shocked by his alleged racist rant. In Italy, Oriani explains, people have an idea of what an NBA owner is supposed to be. That idea was shattered when they heard that this particular owner may have displayed what can only be described as a "plantation-era" mentality.

Oriani says Italian team owners tried to fix the problems of racism, or at least block them, by closing down entire sections of the soccer stadiums where racist chants and antics occurred. But they've never had an owner who makes the situation worse.

“Thank God, there has never been anything like that in Italy,” he says. “We’ve had some stupid owners of basketball and soccer teams, but it’s never come to the point where race got into question.”

The race problem is almost exclusively a soccer thing in Italy, says Oriani. It doesn’t happen at Italian basketball games, though, that's mostly a product of sheer numbers.

“There’s like 50,000 people that are at a soccer game,” he says. “There is the possibility of having more idiots in a soccer stadium that is much bigger than the 5,000 people who attend a basketball game.”