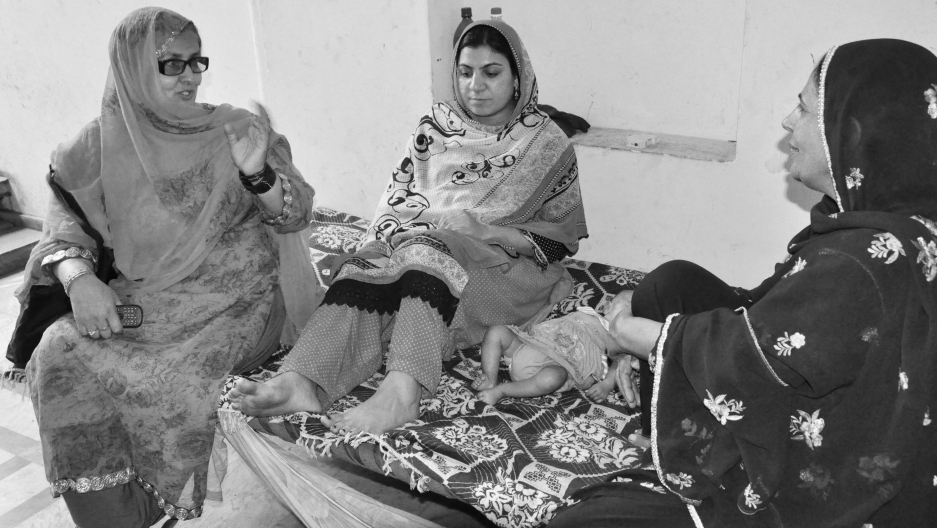 Fatima Haroon, center, is pregnant with her second child. She sits at home with her mother-in-law, right, a friend who serves as a health worker, left, and her infant niece.

Fatima Haroon, 26, gets ready for Friday afternoon prayers at her home in Lahore, Pakistan. She wraps a patterned scarf around her head and kneels as the call to prayer echoes through her working-class neighborhood. When she finishes praying, she quickly pulls off the scarf and starts talking about her family, marriage and children.

Fatima is often exhausted raising her 10-month-old son and a three-month-old niece who has been left in her care. Now she is pregnant again. And she is frustrated.

“Sometimes, I get fed up with being pregnant,” she says. “I cry because I feel weak or when my son is bothering me. I start crying because I got stuck in all of this.”

Fatima did not want to get pregnant again so quickly after her son was born last June. In fact, a neighbor who serves as a health worker offered to provide Fatima with free birth control pills, injections and condoms.

The health worker, Rukhsana Jamil, advises many women in the neighborhood about family planning. “[I] give them the contraceptives and ask them to please keep a gap of two years between their first baby and second baby,” she says. Spacing births is good for the health of mothers and children.

Fatima says she trusted Rukhsana, who is like a second mother to her. (Rukhsana had arranged Fatima’s marriage.) But Fatima did not feel she could take Rukhsana’s advice.

Like many married women in Pakistan, Fatima is deeply embedded in her husband’s family. She and her nuclear family live with her husband’s parents and brothers. Soon after her son’s birth, Fatima’s in-laws told her to try to conceive again.

“My mother-in law and others in my husband’s family told me, ‘Please don’t wait too long to have another baby,’” she recalls. (They were concerned about her ability to have another child because she had a history of miscarriages.) Fatima felt she had no choice but to avoid contraception.

Fatima’s situation is common in Pakistan, says Zaib Dahar, a maternal health advisor at Jhpiego, a nonprofit health organization affiliated with Johns Hopkins University. “[The wife] cannot decide herself, alone,” Dahar says. “She has to seek willingness from her husband, mother-in-law and father-in-law.”

A 2010 study by Population Services International documented this dynamic. Researchers conducted surveys across Pakistan and found that, for a typical woman, “the perception that her in-laws support family planning use was the strongest determinant of her intentions to use contraceptive methods.”

And if a woman wants to undergo permanent sterilization (e.g. tubal ligation surgery), she has even less say in the matter. Hospitals will generally require that she provide her husband's written consent before performing the operation.

Zaib Dahar of Jhpiego says because women in Pakistan do not make birth control decisions alone, community health workers need to speak to entire families — including husbands and in-laws — and counsel them all on the benefits of family planning.

As for Fatima Haroon — who found herself quickly pregnant again after giving birth to her son last year — she says that after her second baby is born, in July, she does not want any more children. But when I ask her what she will do if her husband’s family pressures her to have another baby, it becomes clear that her plan is more of a wish.

“I don’t think anyone will tell me [to get pregnant again],” she says. The she adds: “God willing.”

Sonia Narang reported from Pakistan with support from the East-West Center.