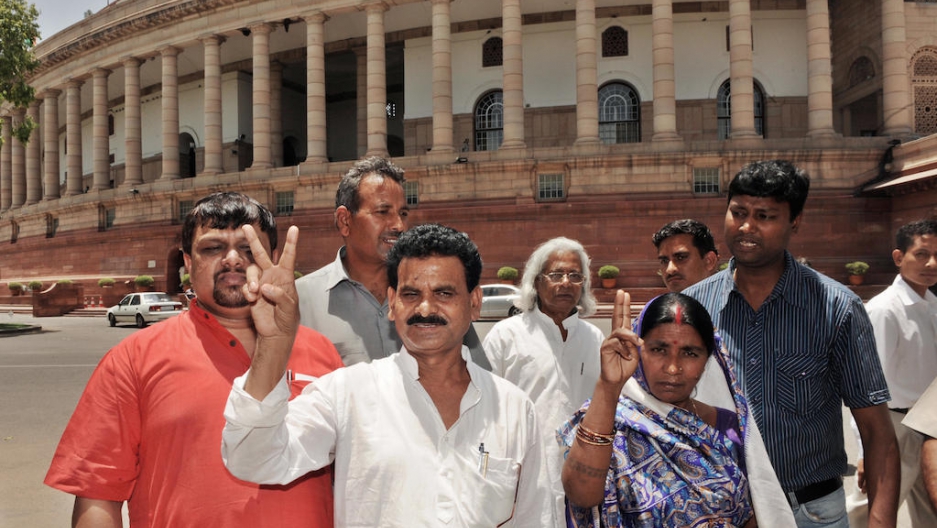 Kameshwar Baitha and his wife show the victory sign at Parliament House in New Delhi in June 2009. One of the most feared Maoist commanders he contested India's 2009 general election from inside a jail, with a 500,000 Indian Rupee reward on his head and dozens of criminal cases pending. He is running for parliament once again in the election concluding in May 2014.
Credit: Raveendran
Share

NEW DELHI, India — With 1.2 billion people you’d think India would have no shortage of upstanding citizens willing to hold for public office.

We’re not talking unpaid parking fines. Many of the charges relate to rape, robbery and murder.

Nearly all of the 3,355 candidates have filed declarations of any criminal charges against them. (Only 50 have yet to file, at the time of writing). Of these, 328 have admitted to serious criminal charges — with at least 21 accused of murder.

Such charges — even unproven — might make it difficult for a candidate to campaign in Europe or America. But some of India’s accused are already members of parliament.

How could this be?

One reason is that many Indians just don’t trust the country’s legal system. Criminal cases are often dismissed as the result of a corrupt political system and police force. And a backlog of cases means that it can take decades before a trial will take place. Up to 30 million cases are pending.

After the infamous Delhi rape case, in which a woman was raped and murdered on a bus in December 2012, an Indian government report highlighted the number of MPs accused of rape and recommended that no one be allowed to hold public office if they are accused of sex crimes. As of yet, no legislation has been introduced.

The Association for Democratic Reforms has compiled a report detailing the charges against candidates. Here are six candidates who have some tough questions to answer.

We should stress that these are all pending allegations. No one on the list has been convicted.

Accused of: 109 serious offences including 25 attempted murders, 16 murders, seven charges of mischief by fire or explosive substance with intent to destroy house.

Baitha spent 28 years as the leader of Maoist forces fighting the Indian Army in the jungles of Jharkhand. The Maoist rebels, known as Naxalites, have spent 50 years fighting what has been described as India’s silent or secret civil war, and often recruit tribal villagers whose homes are cleared to make way for mining mineral deposits.

Baitha stood for election in 2009 from a jail cell and won his seat. He was eventually released on bail in 2011. He is reportedly the first Maoist who has made the transition from bullet to ballot, but he doesn’t like to be reminded of this, angrily telling a Times of India interviewer: “You should not ask me this question anymore.”

Of his alleged crimes, he said, “As far as my past in considered I was arrested when I was unarmed. Police never had the might to humble me by the bullet, nor will it be possible by ballot.”

He told AFP that people in his constituency see him as a "Robin Hood" figure. “You are sitting in distant Delhi — come to the region and you'll know what the people have to say about it, what they think of these cases."

Accused of: 22 serious offences including one count of attempted murder and one of extortion.

You might think that Dadan Yadav has an identity crisis. The former professional wrestler has changed his name twice, from Dadan Singh to Dadan Pehalwan. He now hopes that his new surname might help him appeal to low caste Indians, known as Dalits.

In 2000, as a minister in the Bihar state government, he was accused of kidnapping a vegetable seller after one of his aides allegedly shot at the man.

He and several supporters were charged with attacking police officers during a public meeting in the 2005 general elections.

When he was known as Pehalwan, he was “accused of forcibly occupying a government bungalow in Patna,” according to the Mail Today.

He’s also apparently not above using public money for his own benefit. As minister, he reportedly commissioned a large statue of his favourite wrestler, to be placed outside his home.

Accused of: 14 serious offences, including the murder of a political rival and his driver.

Patil’s biography leads like the resume of a thoroughly respectable politician. He trained as a doctor and has been a minister in the Maharashtra state government since 1978, with a few election-induced intervals.

That changed on June 3, 2006 when Congress Party politician Pawanraje Nimbalkar was gunned down in a street market in Mumbai.

India’s Central Bureau of Investigation claims Patil viewed Nimbalkar as a dangerous political rival, so he hired some contract killers to neutralize Nimbalkar.

Patil was arrested in 2009 after he had been elected as MP. Renowned anti-corruption campaigner Anna Hazare lodged a complaint with the police against him.

The charge sheet against Patil says he paid 3 million rupees ($50,000) as part of a conspiracy to the murder, which the CBI says was carried out by three guns for hire but involved Mumbai businessmen and politicians.

The case began officially in 2011 but shows little sign of concluding. Patil is standing for re-election, and Hazare claims he has received threatening phone calls warning of “dire consequences” if Patil loses.

Mutalik is a right-wing Hindu activist who believes it is his job to act as a moral policeman for the youth of India.

He acquired the nickname “pub-attacker” in 2009 after he allegedly led 40 supporters of his Sri Ram Sene group in an assault on the Amnesia bar in Mangalore, Karnataka. A TV crew was helpfully on hand to record the incident.

Mutalik claimed, “In that pub, women were indulging in obscenity, they were taking drugs. This incident is just a small thing, it is not abnormal.” Two women were hospitalised after the assaults. He announced a plan to forcibly marry couples found together on Valentine’s Day the same year, but he and 140 activists were held in preventative custody.

Mutalik is standing as an independent candidate, but some members of Narendra Modi’s Bharatiya Janata Party would dearly love to see him elected on their ticket. Karnataka BJP members tried to invite him into the BJP in March 2014, with Mutalik saying he was joining to “ensure Modi becomes PM.” But BJP leaders in Delhi expelled him from the party within hours after a massive backlash.

Accused of: three serious offences, including murder and attempted murder.

Bhagwan Singh Kushwaha is a former minister in the Bihar state government who was allegedly involved in the murder of a village headman in his constituency.

Vinod Singh was returning to his home when he was shot dead in February 2013.

Singh’s supporters formed a mob and burned tires outside a railway station in protest at Singh’s death. Officers say Kushwaha conspired with others to murder Singh.

Rana was suspended by his party leader Mayawati Kumari after allegations surfaced in 2011 that he was involved in the rape of two young women from Delhi.

The two women were allegedly abducted in June 2011 after returning home from a hill station in Uttarakhand. The women were reportedly stopped at gunpoint on a busy highway while they travelled with their cousins back to Delhi, then taken in an SUV to a secluded spot where they were attacked.

Two of Rana’s political aides, two bodyguards assigned to his wife and two of Rana’s brothers were arrested.

The politician denied the allegations, saying "I am being framed. I've got to know from the media, that there are allegations of my goons and driver attempting rape, but I don't understand, why I am being named for an incident which has no connection with me. If I am still being dragged into this case, then I think all the mobile records should be checked. I have done nothing wrong. I am being framed."

Rana left Mayawati’s party and is now standing for election to the Lok Sabha for her main rivals.