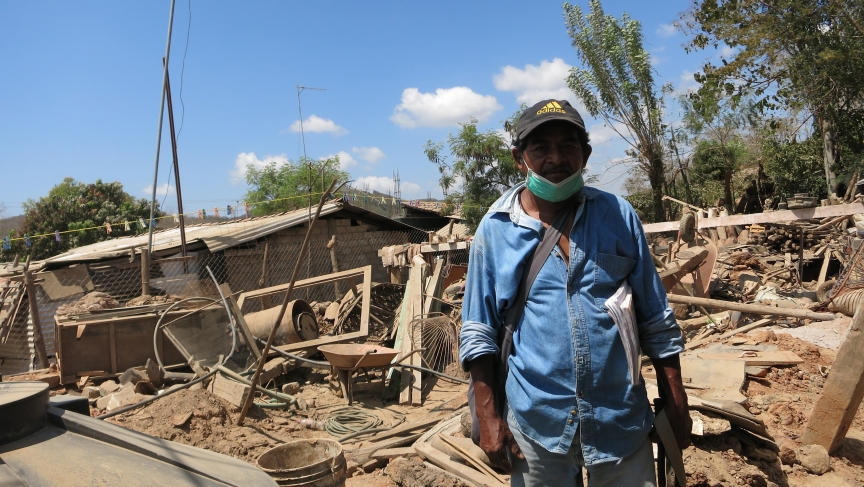 A man stands among the ruins of his home in the village of Cacahuatapec, just outside of Acapulco. The community was destroyed last September when the nearby river flooded as tropical storm Manuel hit.

There’s a reason why Hollywood’s elite once flocked to Acapulco — it’s one of the most beautiful bays in the world, with lots of restaurants, nightclubs and tall hotels right on the Pacific Ocean.

On a calm, sunny day, it’s hard to imagine this place last September when Tropical Storm Manuel, which later became a hurricane, tore through Acapulco. Southern Mexico was actually battered by two hurricanes at once, Manuel from the Pacific and Hurricane Ingrid from the Gulf of Mexico. Manuel inflicted more than $4 billion in damages throughout Mexico and killed at least 169 people. In Acapulco, there was looting, chaos, and tens of thousands of stranded tourists.

Elvia Zevala manages one of the high-rise hotels right on the beach, the Crowne Plaza. As she tells it, though, the storm wasn’t all that bad.

“We just saw it as a heavy rain, that’s it. This part of Acapulco didn’t suffer real damage,” said Zevala.

I thought Zevala was just trying to put her city and hotel in a good light. But she wasn’t alone. Several other hospitality folks I met also shrugged Manuel off. And looking around the big hotels and restaurants, it’s hard to find signs of lingering damage. The hotels here have hurricane preparedness plans — emergency food, reinforced windows — and they appear to have passed the test.

But walk a few minutes away and it’s a much different story.

When the storm came, she said, it wiped out the wall protecting the shop owners. She said the water was about five feet high and took everything — her clothes, her inventory, her business. 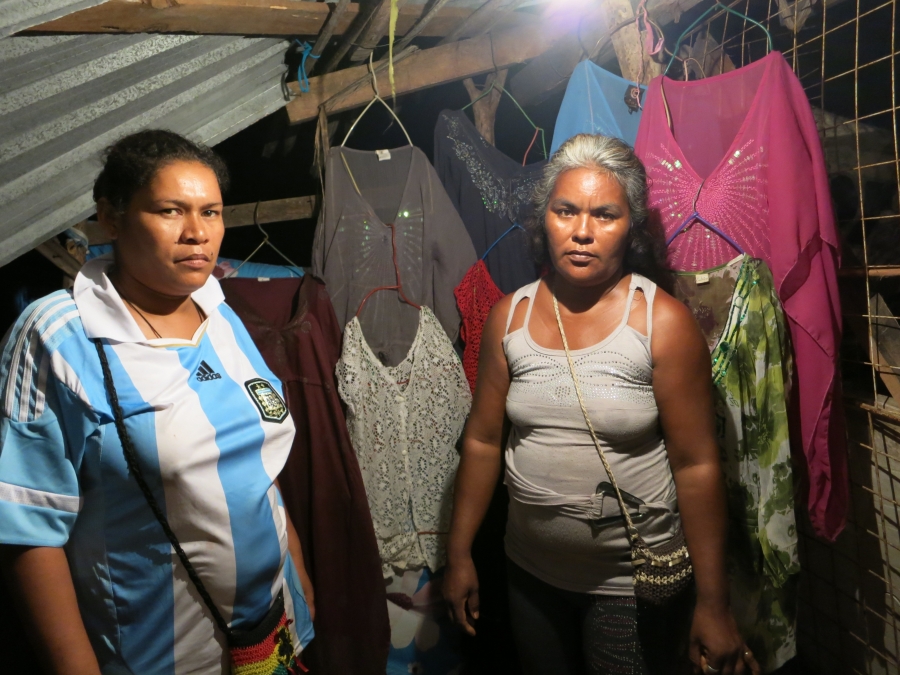 Graciela Sosa Martinez, right, and Arele Palma Sandoval own tourist stands that were wiped out by tropical storm Manuel. Located right on the ocean, they worry it will happen again.

Shop owners here said the government gave them $600 each to rebuild — not nearly enough. Besides more money, Martinez says they need protection from the next storm. The area has long been one of the most susceptible spots on the planet, and as ocean temperatures rise, climate scientists predict storms will grow more intense. There's evidence that hurricanes have already become stronger over the past 30 years.

Sosa pointed at a lagoon a few feet from her shop. Without a new wall, she said, they’re going to be in a bad situation when the rainy season comes. She had never seen a storm like the last one.

I asked another shop owner, Arele Palma Sandoval, if she knows much about climate change.

“Yes, I hear about this global warming. I hear about the North and South Poles, how the ice is breaking,” she said. “As far as I understand, the ocean water is increasing, and we are really worried that this water has come to us.”

These shops are in a highly vulnerable spot. Yet the owners say they can’t move — they build their tourist shops where tourists come, next to the sea.

The Mexican government says it’s taking these concerns seriously. It recently became one of the first countries to enact an aggressive plan to fight, and also adapt to, climate change.

“For example, in areas that are flood prone, we’ll try not to have homes there. We’ll try to do public works there that protect the population,” said Martinez.

But protecting vulnerable communities is expensive. Is it better to invest in things like stronger levees for coastal communities or in helping people relocate?

In other words, there are no easy answers. And there are lots of critics who say, yes, the government has a plan, but only ideas on paper. There’s been little action.

Take the case of Cacahuatapec, an area of small communities across the Papagayo river just outside Acapulco. I paid a boatman about 75 cents for a ride across. He pushed a long stick against the river bottom to carry me and community leader Marco Antonio Suastegui Muñoz.

“The river is very gentle,” Suastegui said. But when Manuel hit last September, the river swelled.

We climbed out of the boat and walked up a dirt grade to what used to be a basketball court.  It was quickly apparent that something wasn’t right.  Suastegui, who wore a black cowboy hat and carried a big machete, reached up and put his hands through the rim.  He isn’t that tall — he was standing on several feet of sand, deposited here from the river.

Walk a little further along and things turn more surreal.

Tops of small buildings were poking through the ground — buried ruins. Subsistence farmers and people who work changing bed sheets and washing dishes in the tourist area called these places home just a few months ago.

I asked Suastegui: Who is responsible for protecting these places in highly-vulnearable spots?

“The government needs to protect these people. They are in charge of the country and they need to help us,” he said. “But the farmers need to work, as well, on all these changes, like creating these different programs to understand what’s happening with climate change, how we can prevent all these things. We need to work together.”

Right now, that’s not happening. People here say the flooding was actually worse than it might have been because of a government-built dam upriver. The government, and private industry, want to build another dam, in spite of years of protests and civil disobedience.

Suastegui said the government is now ignoring them, punishing them in their moment of need. The tourist hotels across the river seem fine. But just look at this place, six months after the storm, he said. “The government has done nothing."

“We won’t accept relocation,” he said. “We want reconstruction. This is where we live and we’re not leaving.”

Government officials from the state of Guerrero didn't accommodate repeated requests for an interview.

Some of the villages here date back to the 16th century. Suastegui understands his town could be wiped out again when the next storm arrives. But it’s hard to argue with someone that it might be time to move to safer ground when his ancestors have been living here for more than 400 years.