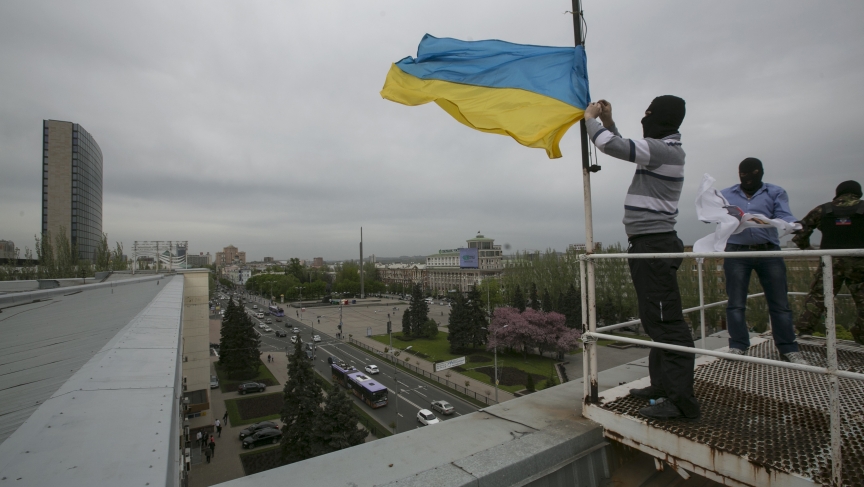 Masked pro-Russian activists haul down the Ukrainian flag from the top of another government building in eastern Ukraine, Monday.

The mood in Ukraine remains tense, with the Russian army just across the border. And violence is rising in the east.

In eastern Ukraine, pro-Russia separatives have launched a spate of kidnappings that have targeted ordinary citizens, journalists and s a group of international observers from the Organization for Security and Cooperation in Europe. The mayor of Ukraine's second city, Kharkiv, is critically ill in the hospital after being shot, apparently in the back.

Accounts vary, but Mayor Hennadiy Kernes was apparently out exercising when he was attacked.

Kernes was a supporter of President Viktor Yanukovych until the former president was ousted in the February revolution. Kernes then fled before returning to make his peace with the new regime in Kiev.

He has since been a staunch supporter of Ukrainian unity, setting him at odds with pro-Russian separatists who appear to be taking over much of eastern Ukraine. However, it's not known why he was attacked.

But the shooting has rattled Kiev, Stern says, where everyone is anxious about the possibility of a Russian incursion. He says it's as if "the sword of Damocles" is hanging over Kiev — an allusion to the ancient Greek myth signifying imminent peril.