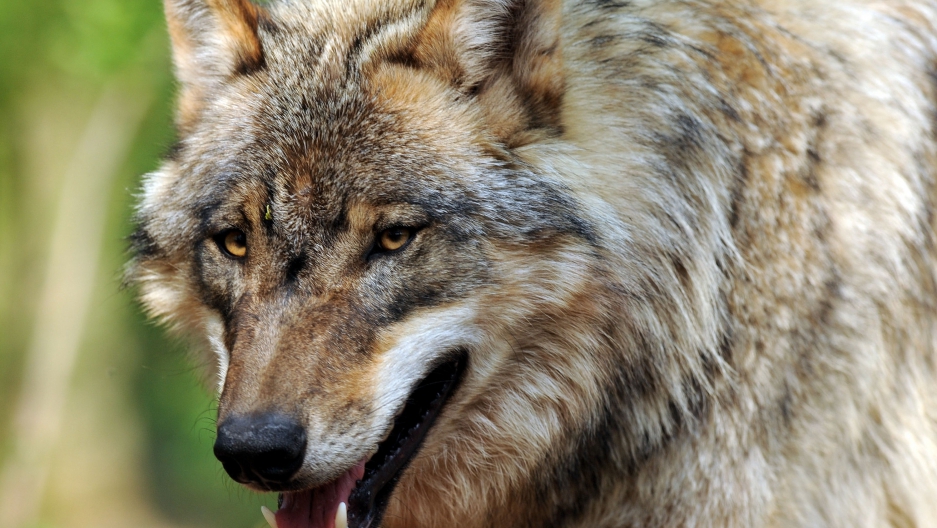 Editor's note: This story was originally published on April 27, 2014.

SPREMBERG, Germany — Surrounded by a flock of 250-odd black-faced sheep near this northeastern town, Frank Neumann jams his green Trilby hat on his head before a gust of wind sends it flying, then chuckles as his 120-lb sheepdog leaps up to lick his face.

The bearlike Pyrenean mountain dog is people-friendly, but it's no pet. Before the stocky farmer obtained six of them to protect his flock, he arrived one morning to find 27 of his cherished sheep eviscerated, their guts strewn across the pasture. It was a tough way to learn that the wolf had returned to Germany.

“Officially, there weren't supposed to be any here,” Neumann says. “I was pretty angry because no one had warned us.”

New sightings confirm that wolves are making a rapid comeback across Europe. But the most surprising success story — together with possible related problems — is here in Germany, which lacks the infrastructure for wildlife protection despite its strong tradition of environmentalism.

“Germany as a whole is becoming affected by wolves,” says World Wildlife Fund wolf expert Janosch Arnold. “Five years from now we’ll have them in nearly every district.”

Since the year 2000, when an infrared camera produced the first evidence of their return close to the Polish border, the number of wolf packs in Germany has mushroomed from two to more than 30.

Their comeback was initially attributed to the emptying of rural areas in what was formerly East Germany.

But with wolf packs settling amid wind-energy projects, along well-trodden nature trails and even on Berlin’s doorstep, it's now clear that the European Union's tough protection laws are responsible.

In a troubling development for some farmers, wolves are proving no more prone to remaining isolated in the wilderness than America's coyotes.

Wolves have killed some 350 farm animals across Germany during the past five years. Some farmers claim fear is stopping their sheep from breeding.

In recent weeks, wolves were indirectly blamed for a bloodbath on the Autobahn after a herd of frightened horses broke from their paddock and bolted onto the highway.

As in US states where wolves have made comebacks, such incidents have prompted calls from farmers and hunters for relaxing a ban on hunting the wild canines.

That's exposing a rift between the rural residents who must live with wolves and urban environmentalists who love them.

Conservationists are concerned that a serious lack of skills and funding would make the reinstatement of controlled hunting problematic.

Even in countries where wolves have always thrived, such as Finland and Norway, hunting licenses are often allotted with little understanding of population dynamics, critics say.

Germany has no agency that compares with the US Fish and Wildlife Service, which has a budget of nearly $3 billion a year to implement laws like the Endangered Species Act.

Instead, the country's 16 states are left to conduct their own conservation policies. Research and monitoring is left mostly to poorly trained volunteers, says Ilka Reinhardt, one of Germany's rare wildlife biologists who helps run the wolf management bureau in Saxony, which has the Germany's largest population of wolves.

“In that regard, we’re like a developing country,” she says.

However, the real problem may be not the wolves themselves, but economics.

But farmers say compensation for slaughtered animals is always slow to arrive. And the funds cover only concrete items such as electric fences or sheepdogs, not the additional labor required for installation or training.

Compounding the problem, many sheep farmers make ends meet with the aid of European Union subsidies for the preservation of grassland ecosystems. They're essentially paid to graze their sheep, which means they must continually move from one pasture to another. The new threat of wolves requires them to also move their fences.

That's what bothers farmer Neumann, who despite the slaughter of his sheep remembers his lone sighting of a wolf as having filled him with exhilaration.

He's solved the problem of wolf attacks with his dogs and electric fences. But feeding his six huge flock-watchers costs him around $8,000 a year, a big chunk of the profits generated by 750 sheep.

“Many of us farmers here in Saxony are prepared to live with wolves,” he says. “But it's a huge financial burden.”