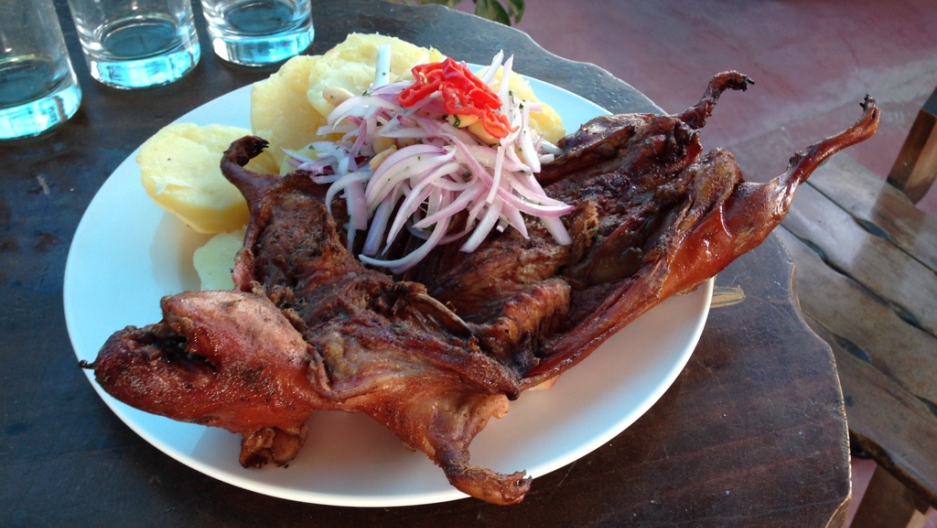 Editor's note: This story was originally published on April 26, 2014.

LIMA, Peru — Gutted and splayed out on its back, its claws and teeth bared in a death grimace, the roast guinea pig stares up from the plate.

Its eyes appear to bore into me as I toy with the ultra-Peruvian garnish of boiled potatoes and sliced onions soaked in lime juice, and then poke gingerly with a fork at the little fella’s ribs.

But this is no time for squeamishness. Or utensils, for that matter.

My two companions barely hesitate before each ripping off a leg and tucking in. Just like fried chicken, guinea pig is eaten with the hands. And he who hesitates goes hungry.

For the rest of the world, guinea pigs may be perfectly cute, low-maintenance pets, or disposable lab test subjects. But here in the Andes, where the species evolved, they have a very different use — lunch.

For millennia before the Spaniards arrived in the 16th century, locals in what are now Ecuador, Peru, Bolivia and Colombia have been rearing and eating the domesticated furry rodents with gusto.

To an American, they might seem like a cheap source of animal protein — an average, 2-pound guinea pig costs around 20 Peruvian sols (roughly $7). But in this neck of the woods they’re a rare delicacy and often saved for special occasions such as Christmas or a birthday.

And nowhere do they eat more guinea pig — or “cuy,” as it’s known here, from the indigenous Quechua language — than in Peru.

William Lossio, who heads a national association of guinea pig producers, says cuy consumption is booming here. The average Peruvian now eats around 800 grams (just under 2 pounds) of it a year, exactly double the amount of a decade ago.

Of course, animal protection laws notwithstanding, South American residents in the US could just pop down to their local pet store. According to Lossio, those animals are essentially the same as the ones reared in Peru for food. But there is one difference: Pet guinea pigs are bred for fluffiness, while his animals are bred to be, well, meatier.

The trend has even garnered the attention of The Simpsons: Lisa recently designed comfy Peruvian-style digs for her pet guinea pig Pokey — although she didn't end up scarfing him down.

One reason Peruvians are eating so much cuy these days may be the country’s sustained economic boom. As poor people, the main consumers of the creatures, move up in the world, they can now afford to treat themselves more frequently.

But Lossio has a different theory. “This is part of our culinary boom, and the process of reclaiming traditional Peruvian cuisine and being proud of it,” he says as he gnaws on a thighbone.

In that process, spearheaded by the chef Gaston Acurio, cuy has finally started to break through Peru’s deep divisions of race and class.

Acurio now serves it in his flagship restaurants in Lima. In Astrid y Gaston, the eatery sometimes ranked Latin America’s best, the dish is "cuy pekines," a sublime fusion take on the Chinese classic Peking duck.

Another top Lima restaurant, La Gloria, one of the first to offer its clients the little rodent, offers an appetizer of crispy guinea pig legs (above).

“I’ve eaten cuy all over Peru and it wasn’t a hard choice to put it on the menu. But most people from Lima wouldn’t touch it with a barge pole.”

To be clear, by “most people” he means a slice of society that’s like him: of European ancestry and wealthier than most.

Similar to many Americans, white, moneyed Peruvians' attitudes toward the idea of eating the fluffy little creatures range from "yuck" to "How could you?"

But that hasn’t stopped poorer Andeans from gobbling them up.

Guinea pigs are now so sought after that Lossio’s company, Machu Picchu Cuy, was hit by armed robbers in 2011. In four hours, the crooks stuffed 3,500 of the terrified rodents into sacks.

Rearing cuy remains largely a cottage industry, literally. Normally, the animals can be found scurrying under foot in humble households in the Andes, and to a lesser extent the Amazon.

They usually eat any scraps of grain or vegetables they can find on the floor. But for the best quality meat, required by the restaurants that Lossio supplies, they need to be fed on alfalfa leaves, corn stalks and pellets made from soy and other grains.

The animals grow to around 2 pounds in a couple of months and are then ready to be eaten, although some prefer even larger animals. Ecuadoreans, apparently, like their cuys to be around 3 pounds, but as their growth slows after eight weeks or so, producing these larger animals provides diminishing returns for breeders. No wonder cuys are an integral part of Andean culture. In the cathedral in Cusco, the old Inca capital, a Last Supper painting shows Christ and the apostles dining on guinea pig.

They are also hardly the only rodents that humans eat. In the Amazon, locals hunt capybara, the world’s largest rodent, the size of a large dog.

Americans might want to think twice before condemning Peruvians. Elvis was just one of many southerners to grow up in poverty eating squirrels whenever he could catch them.

As Lossio (seen above) shows me around his farm of thousands of squeaking, squealing cuys in brick pens, he points to one rotund individual, noting: “We like them to be fat. That way they resemble rabbits.” The skinnier ones, it has to be said, resemble tailless rats.

Once on a plate, though, the difference becomes theoretical. With the fat melted off the carcass, any cuy served whole — with the guts, other than the kidneys, liver and heart, cleaned out — pretty much looks like, er, a rat.

Indeed, serving the animal whole is one of the defining differences between traditional recipes and the new fancy dishes at places like La Gloria or Astrid y Gaston.

While poor Peruvians may like nothing more than nibbling at the skin between the claws or gnawing at the juicy meat on the cheeks, the gourmet restaurants usually avoid serving anything too recognizable as a guinea pig.

And when they do serve the animal largely intact, they remove the paws and head that might give their moneyed customers pause.

A little like the dark meat on a chicken, but less tender, is the short answer. But it also depends on the recipe, of course. Peruvians use a bewildering variety of spices and vegetables to flavor their food.

In the mountainous northern Cajamarca region, dismembered cuy is often served in a stew with eggplant. In the central region of Ancash, the preferred preparation is “picante de cuy,” with the animal carved into pieces, flavored with cumin, garlic, peanut paste and chili, and grilled.

Cuy is more often than not served with potatoes, boiled, but manioc or rice can also be used.

The cuy I ate with Lossio, in the picture at the top, was “al cilindro,” in other words, slowly cooked in a closed cylindrical barbecue, absorbing the flavor of the wood smoke.

Liu Alcantara of the restaurant La Perla del Mar, a glorified shack in the dust beside the Pan-American Highway 30 miles south of Lima, says the meat cooks similarly to chicken but takes longer. “It’s tougher,” she says. “Especially if the cuy is older.”

Chewing on a guinea pig cheek, diner Alejandro Zabela, 50, adds: “I love the taste but I also like eating it with my hands. It just seems more natural than using a knife and fork.”

Elvis, no doubt, would have agreed.