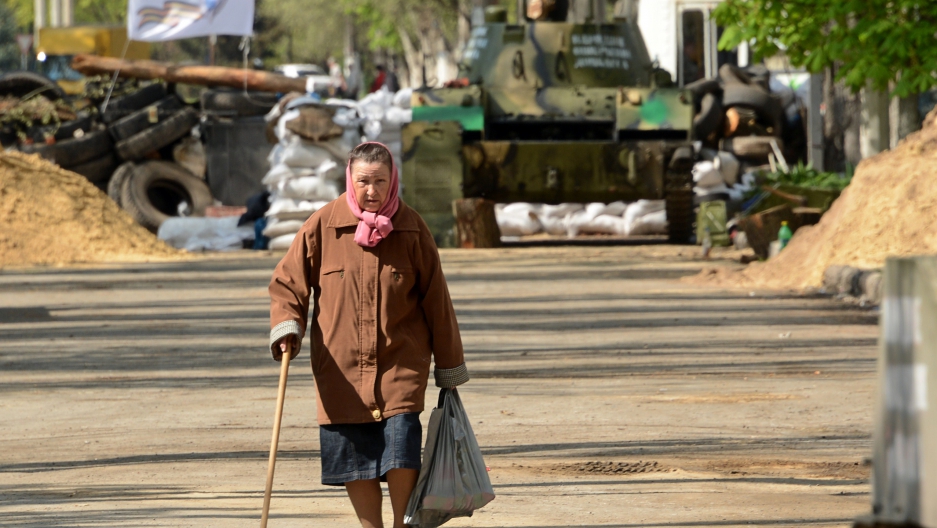 An elderly woman walks past the security service regional building seized by the separatists in the eastern Ukrainian city of Slovyansk on April 23, 2014.
Credit: KIRILL KUDRYAVTSEV
Share

That’s because although the middle-aged cafe owner lives on the outskirts of the rebel stronghold of Slovyansk, she does not share the same visceral, anti-government zeal as those who’ve seized her city in recent weeks.

Personally, Bogdanova says, she’d like to live under Russian rule.

But for now, she’d rather cultivate her roses and potatoes in peace, without exposing her 12-year-old son to the sight of automatic weapons wielded by both separatists and the Ukrainian army.

“The way I see things, it’s just a battle between two clans,” said Bogdanova, referring to the standoff between pro- and anti-government forces.

As a wave of anti-government discontent washes over eastern Ukraine, so too does a sense of uncertainty among some locals about the increasing militancy of the separatist movement here.

While anger against the new Kyiv authorities remains widespread in the east, some observers say the rampant lawlessness in Slovyansk, as well as the occupation of official buildings in other cities, may be eroding support among otherwise sympathetic locals for the pro-Russian protests.

“The escalation of violence undoubtedly promotes the differentiation of opinion among people who either actively or passively support the separatists,” said Ihor Todorov, a professor at Donetsk National University.

The armed seizure of the separatist stronghold of Slovyansk earlier this month has been followed by an escalation of violence marked more recently by a string of mysterious kidnappings there, as well as the pervasive sense of lawlessness that’s flourished under militia rule.

Meanwhile, local police have been largely missing in action since the uprisings in eastern Ukraine began.

It’s a drastic change for a region that’s long been pro-Russian but has also traditionally prized social and economic stability over political preferences.

Now, despite the widespread anger at Kyiv, which many locals accuse of sidelining eastern Ukraine, some are asking whether the revolution in the east is any better than the alleged “coup” they say was staged on Independence Square — the nerve center of the pro-Europe protests.

“One simply can’t understand it,” said Ivan Savelyov, a 71-year-old pensioner in Donetsk, pointing to the young toughs wandering around the city’s occupied regional administration building with clubs.

There, they’ve erected barricades of wood, tires and barbed wire, and meander the perimeter in second-hand fatigues in defense against an enemy that’s so far nowhere in sight.

But he also slams the uprising in the east for its apparent lack of strategy.

“It’s completely unclear what these barricades are for, or what these guys are trying to achieve,” he said.

Recent survey data on southeastern Ukraine from the Kyiv International Institute of Sociology (KIIS), a respected pollster based in the country’s capital, appear to reflect that sense of concern about where the pro-Russian protests are heading.

According to the poll, about 72 percent of the population in the Donetsk region is against the armed seizure of administrative buildings.

Meanwhile, around 51 percent of respondents say “rampant banditry” is their top fear, while 46 percent say the government’s top priority in order to preserve the country’s unity should be disarming “illegal radical groups.”

Experts say the increasing volatility of the situation in Slovyansk and other rebellious cities has unsettled a population used to a sense of stability.

“Because of their natural conservatism, they don’t want the uncertainty that this sort of chaos produces,” said Todorov, the university professor.

Observers have also long pointed to the political passivity that’s traditionally commonplace in the region populated mostly by the working class.

That might help to explain why Donetsk’s occupied regional administration is less than booming these days, visited usually by no more than around 150 protesters at any one time.

Most are pensioners, middle-aged blue-collar men and disaffected youth, who huddle around ramshackle tents smoking cigarettes as cheesy, patriotic music blares from the stage.

It stands in stark contrast to the flow of peaceful, seemingly carefree locals who stroll along the charming, grassy pedestrian boulevard it anchors, past cafes with glass facades and tasteful kiosks that display the city’s history in photos.

Protest supporters admit that it’s difficult to attract more locals to the streets.

“People will be people,” said Serhei Oliynyk, 42, who attended a recent anti-government protest at the barricades. “Many are inert.”

“Those who really care will come out, but the rest will only realize it when the tanks start rolling in,” he added, referring to the “anti-terrorism” operation the Kyiv authorities have launched in the east.

Yet there is also no consensus among protesters about what exactly the movement is attempting to achieve.

Activists for the self-declared “People’s Republic of Donetsk” have broadly advocated for the “federalization” of Ukraine, but appear to be pushing for a referendum to decide whether the region should be independent.

Most of the angrier babushkas — a mainstay at the barricades — bristle at suggestions that they’re “separatists,” but fawn over Russia and crave what they say are the better economic opportunities there.

Meanwhile, the KIIS poll finds that only about 27 percent of the region support becoming a part of Russia, while 66 percent oppose the presence of Russian troops here.

Then there are those who feel entirely powerless over the region’s political fate.

“I’ll never figure it out because it’s all about high politics,” said Vera Valentinovna, a 57-year-old who said she came out of curiosity to watch a demonstration in front of the regional administration building on Saturday.

Valentinovna said she’d prefer for the region to remain with Ukraine.

But after speaking with her frightened relatives who live in Slovyansk, where clashes between rebels and government forces left several dead earlier this week, she’s more concerned the armed uprising there will eventually lead to her biggest fear: open war.

Pointing at the masked men guarding the front of the regional administration building, Valentinovna added: “A bad peace is better than whatever this is we have now.”