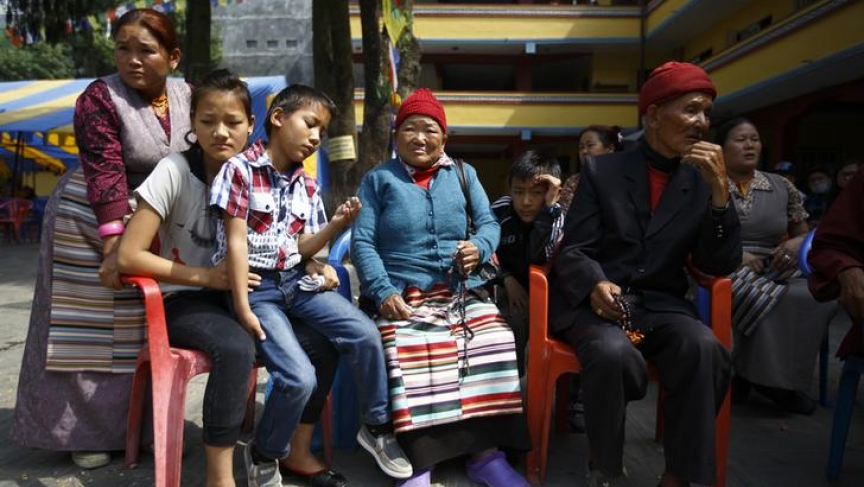 Family members of Nepali mountaineering guides who lost their lives in an avalanche on Mount Everest wait for the bodies of their loved ones to arrive at Sherpa Monastery in Kathmandu April 19, 2014. The avalanche, the deadliest in eight years, hit the most popular route to the mountain's peak.

The avalanche that killed 16 Sherpas  last week may be a turning point in the history of Everest expeditions — a time to reflect on the climbing culture and on the risks faced by the mountain's unsung heroes, the Sherpas.

We asked Pasang Yangjee Sherpa, an anthropologist at Penn State University, to answer some questions about Sherpa culture. She didn't have any immediate family or relatives killed in the avalanche, but says the tragic accident "is something that is really sad for every Sherpa." We've lightly edited the interview for clarity.

When you have Sherpa at the end of your name, what does that indicate?

It indicates that we belong to this ethnic group called Sherpas. The term Sherpa is often used synonymously with expedition workers, or porters, because historically those were the jobs that Sherpas did. But it kind of takes our attention away from who Sherpas really are and does not differentiate the ethnic group from the job.

Sherpas currently live in different parts of the world, but the largest communities are in Nepal and the Everest region. And there are large communities of Sherpas living in Kathmandu and New York City.

Why are Sherpas so skilled at mountaineering?

We have been living in the mountains for a very long time and that's where we come from, so we know the area. We know how to live and survive and adapt. But we need to understand that Sherpas do not climb mountains for a hobby or as a sport, they do so to earn money for themselves and their families. So the families can have a better life.

How do Sherpas generally view the Himalayan mountains?

Does the worst accident in the history of Everest expeditions mark a turning point for Sherpas?

My friends and I are hoping this will be a turning point. The cycle of people feeling pressured to go to the mountain and then getting injured or dying, and then the families grieving — I think this cycle has to end. We think this incident should be a turning point for everyone. And for the expedition workers, in particular.

People should pay attention to the real issue: the unfair working conditions and the unfair pay for the expedition workers on the mountain. I hope the Nepalese government is able to set a good standard as to how much insurance coverage should be and provide good compensation for the widows and the families left behind and also for the expedition workers who will lose income this year.

I also hope the big organizations in Nepal who are profiting a lot from this industry will not just be aware, or just say that they're going to honor those individuals who lost their lives, but actually take action to make sure that not only the expedition workers get good pay and they're treated well, but also their families are supported in case something like this were to happen again.