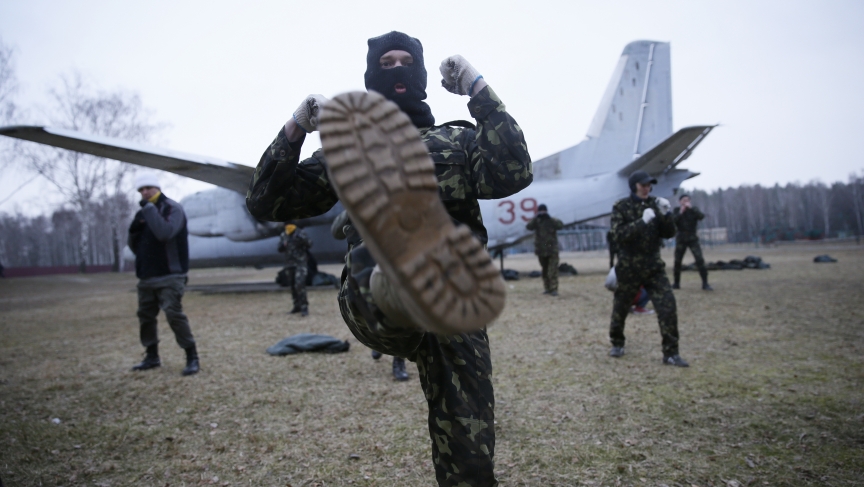 Members of a "Maidan" self-defense battalion take part in a training at a Ukrainian Interior Ministry base near Kiev March 17, 2014.

Russia and Ukraine boast some of the best chess players in the world. But right now, Ukraine's interim government seems to be playing a very dangerous game of political chess.

On the one hand, the government in Kiev is on the attack. It vows to push pro-Russia militants out of occupied government buildings in the east. So far, though, its moves have failed.

On the other side of the board is Russia. And it appears more and more ready to make an attacking move of its own. The Kremlin has deployed additional troops to the border, raising concerns that the Russian military is preparing to invade Ukraine.

And the war of words has already begun. Ukrainian Interim Prime Minister Arseniy Yatsenyuk has said, "The world hasn't forgotten the Second World War and Russia wants to start a third world war."

Are those fighting words? Or are they designed to evoke sympathy for Ukraine?

The BBC's David Stern in Kiev says no one should make a reference to a third world war lightly. If Prime Minister Yatsenyuk is using the phrase as fighting words, Stern says, it begs another question: What exactly is he going to do about it?

"The Ukrainians seem to be in the worse position vis-à-vis the Russians," he says. "They say they will put up a fight, but many people doubt that."

Stern thinks the words may well be meant to evoke sympathy, to get more people to his side. Stern says the prime minister and his government are also under a ton of pressure. "They feel it from all sides," he says.

Stern says the public is also feeling the tension. But it's only visible underneath the surface. Daily life continues. People go to work. They eat. They drink. To the eye, Kiev looks normal. Even the protesters in Maidan are still there.

Stern says the normalcy disappears when you talk to people about the situation in the east. He says a tsunami of words spill out.

And if it does come to war, Ukraine will most likely lose.

"Kiev is very conscious they can't fight Russia alone, or if they do, they won't last very long."