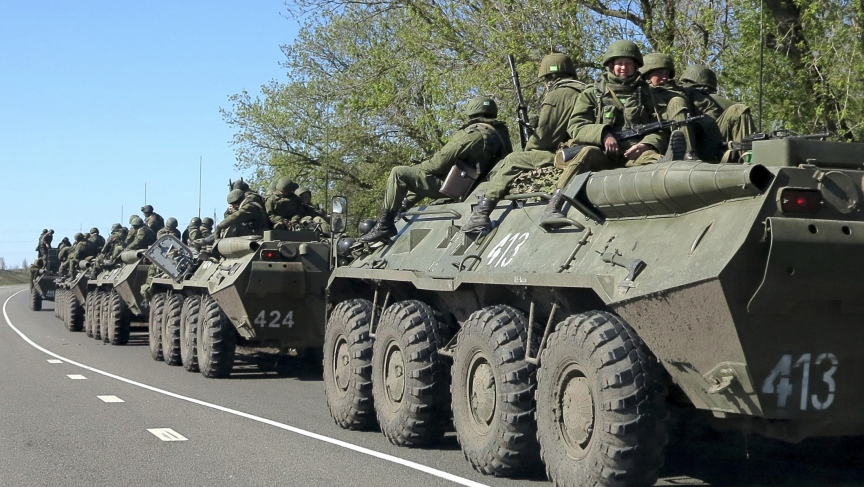 Russian troops were on the move Friday, on the outskirts of the city of Belgorod, just a few miles from the border with Ukraine.

Tens of thousands of Russian troops are on the move near the Ukrainian border. Moscow says they are taking part in “exercises.”

On Thursday, Vladimir Putin accused Ukraine of “grave crimes” by assaulting pro-Russian militants. Ukraine’s Prime Minister accused Russia of preparing to invade, and of “wanting to start World War III.” Nothing is inevitable, but what military options does Russia have?

NATO has assessed that Russia has all the assets in place it would need to launch an old-fashioned all-out assault by air, land and sea. This kind of conflict would involve tank armies, and possibly airborne and amphibious attacks. It would require a violent air campaign to suppress Ukraine's air defenses and its command, control and communications (C3) infrastructure.

The objectives are not obvious. The great Prussian military thinker, Carl von Clausewitz, wrote that war is a means to an end, politics “by other means.” War could become a tool for Vladimir Putin. But for what?

An all-out attack would be the obvious option if the goal is to immediately occupy all of eastern and southern Ukraine: the regions with the largest Russian populations. NATO has assessed that Russia has the capacity to penetrate as far as Odessa in the southwest of the country, and to Transdnistria, the pro-Russian breakaway enclave in neighboring Moldova. Russia lacks the forces in theater to occupy all of Ukraine by force, unless the government in Kiev completely collapsed. Russia is estimated to have 40,000 men on the border. That may sound like a, lot but not compared to the size of the country. The territory was defended by about a million men in World War II.

The risks with an all-out attack are high:

We can’t know Putin’s mind. But his track record indicates he is not a high-stakes gambler, willing to risk all on a single throw. He seems to prefer to play his cards very cautiously and judiciously.

Many analysts are predicting a more limited operation, under the pretext of "peacekeeping" or "humanitarian" objectives. This would involve deploying just enough force to secure one or two provinces: Donetsk and Luhansk are the obvious targets given the level of unrest there. These are the most obvious routes from Russia's known concentration points into the restive Ukrainian provinces of Donetsk and Luhansk.

Small, lightly armed forces could, within hours, seal off the few main roads, and then go on the defensive, digging in against any potential counter attacks. Any Ukrainian units within the cordon would be surrounded and isolated. The goal would be to avoid conflict and bloodshed, with the goal perhaps of enabling a "referendum" — as was done in Crimea.

There are drawbacks too, however. It might prove difficult to stage a repeat performance in neighboring provinces, which become progressively less "Russian" as you move west.

The other downside is that it gives Ukrainians time to shake down their own forces, to weed out the disloyal and incompetent — to improve their staffwork and logistics, their command and control, and lastly to train new volunteers. Even an incompetent army becomes better with time and experience.

OPTION #3: MORE OF THE SAME

Of course, Russia could continue as it has already, continuing to destabilize Ukraine with limited involvement of disguised special forces to bolster locals where needed. This could be with a view to undermining the Kiev government to engineer a collapse perhaps, and the installation of a more friendly regime. Or it could be a prelude to secession.

Whatever option Moscow chooses, history teaches that war is always unpredictable. Another ancient military adage is that the best-laid plans usually fall to pieces as soon as the first round is fired.