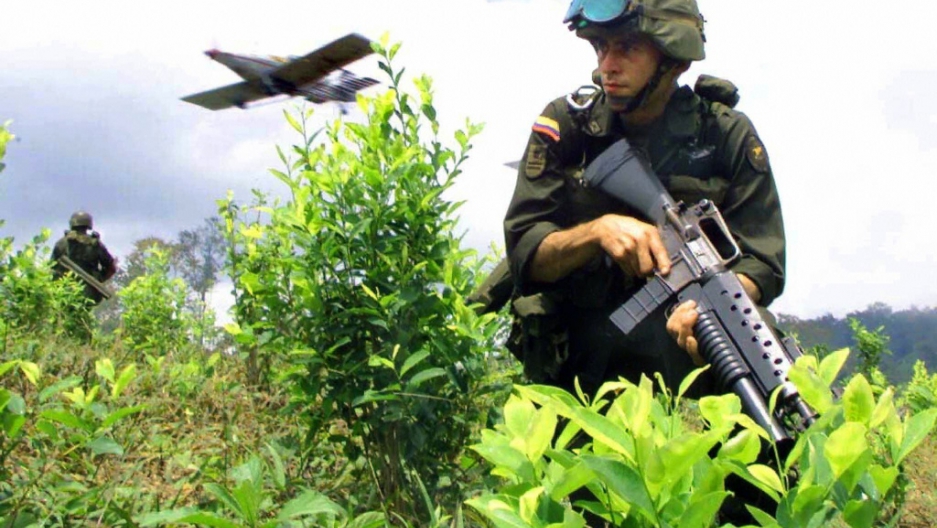 He was lucky. Three weeks earlier, rebel gunfire brought down another anti-drug crop-dusting plane, killing the American pilot on board.

Daredevil pilots have been dodging treetops, mountain peaks and rebel gunfire for the past two decades while spraying herbicide on Colombian drug plantations. The US-backed aerial eradication program aims to destroy coca leaves before they can be turned into powder cocaine.

But experts now speculate that aerial eradication could be grounded. The controversial program is encumbered by several factors, including an ugly dispute with Ecuador and peace talks aimed at disarming Colombia’s drug trafficking rebels, and by questions over whether the air raids are safe and effective.

“The US government has pushed very hard for this policy but it has been very controversial, prompting everything from health complaints to arguments that it’s bad for counterinsurgency,” said Adam Isacson, a Colombia expert at the Washington Office on Latin America think tank. “There is a significant likelihood that the program could disappear.”

Colombia is the only country in the world where drug plantations are targeted from the air. In Peru and Bolivia, other leading coca growers, the plant is uprooted by machete-wielding anti-drug agents. But similar ground-based efforts in Colombia have left 62 people dead and hundreds injured because the rebels often protect the fields with land mines and snipers.

That’s why the US and Colombia have spent hundreds of millions of dollars on aerial eradication, and why officials involved in the program, which is run by Colombia’s anti-narcotics police, strongly defend it. They point out that the size of the 2012 coca crop — 118,000 acres according to United Nations estimates — was the lowest in nearly two decades and marked a huge reduction from the peak year of 2000 when farmers cultivated 402,000 acres.

“The effect has really started to kick in,” one US government official told GlobalPost.

So why mess with success?

Critics of the program say the coca crop is shrinking due to factors that go beyond forced eradication. The biggest has been a long-running Colombian military offensive against guerrillas of the Revolutionary Armed Forces of Colombia, or FARC. Officials say the FARC controls many of the coca fields and finances its war, in part, through the drug trade. But the US-backed military campaign has cut the rebel force’s size to about 8,000 fighters and reduced its territorial control.

Amid this military pressure, some of the coca cultivation may have shifted south into Bolivia and Peru. According to UN data, Peru in 2012 surpassed Colombia to become the world’s largest grower of coca. In addition, some Colombian coca farmers may have switched to hydroponic marijuana (indoors, without soil) or to illegal gold mining — both highly profitable ventures.

Keeping 1 kilogram of cocaine out of the US costs $163,000 in upstream drug eradication, or $3,600 by attacking downstream smugglers.

Daniel Mejia, who heads a drug think tank at the University of the Andes in Bogota, argues that aerial eradication is “very costly and barely effective in reducing cocaine production.” In a 2011 study, Mejia estimated that keeping 1 kilogram of cocaine out of the US costs $163,000 in upstream drug eradication. By contrast, that cost dropped to $3,600 per kilo by attacking downstream drug smugglers.

Hearts and minds are at stake. Impoverished peasants, who grow much of the coca under rebel guidance, claim it’s the only profitable crop in remote regions. Spraying coca without offering these farmers economic aid can turn them against the Colombian government. Efforts to promote legal economic endeavors in coca growing areas have often failed due to poor planning or the lack of decent roads to get crops to market.

“If you don’t go in with alternative development and food security programs afterwards the end result is the creation of a robust insurgency,” the US official acknowledged. “You can't just put a hammer to the people.”

Due to similar concerns about destabilizing the Washington-backed government in Afghanistan, US proposals in 2007 to deploy spray planes against Taliban-controlled opium poppy fields were scrapped.

More from GlobalPost: The rise of an Afghan narco state

Aerial spraying also irks the neighbors. Last year, the Colombian government agreed to pay Ecuador a $15 million settlement after the Quito government filed suit in the International Court of Justice in The Hague claiming that the herbicide released from planes spraying near the border had drifted into Ecuador causing environmental damage, livestock deaths and health problems for humans.

US officials have long insisted that there are no proven links between glyphosate, the active ingredient in the herbicide, and health problems.

But perhaps the main reason why the Colombian government might conclude that aerial eradication is more trouble than it’s worth is the peace process with the FARC that began in Havana, Cuba, in November 2012 and is designed to end the 50-year-old war. The two sides are now discussing the illegal drug trade and a key FARC demand is that the government ground the crop dusters.

Isacson says that a disarmed FARC would remove the justification for aerial spraying since it would presumably be safe enough for manual eradicators to attack coca fields on the ground. The FARC, he added, should commit to supporting government programs that help farmers transition away from coca and prevent new trafficking organizations from getting a foothold in these zones.

President Juan Manuel Santos is a close US ally but he has called for a worldwide debate to come up with more effective strategies for dealing with illegal narcotics. Justice Minister Alfonso Gomez Mendez points out that Colombia has for years gone along with aerial eradication and other anti-drug directives from Washington but that the cocaine business remains robust.

“Colombia has been like the patient that follows all the instructions from the doctor but still has a fever,” Gomez Mendez told reporters after discussing fumigation and other drug issues with US Attorney General Eric Holder during a March visit to Washington.

Gomez Mendez said the Colombian government was “analyzing” whether aerial eradication should continue and suggested that the $69 million that the US spends annually on the program could be used for rural development.

But other Colombian officials strongly support spraying coca, as does Kevin Whitaker, the incoming US ambassador to Bogota. At his confirmation hearing in December, Whitaker said that canceling the program “would be a great mistake.”

Indeed, even if the FARC agrees to disarm under a peace accord, some demobilized fighters are likely to remain in the cocaine business and to promote coca cultivation. Amid these uncertainties, the US official said the spray planes should remain in the air. The fact that the guerrillas are constantly aiming at the crop dusters, he says, indicates their drug profits are taking a big hit.

“If aerial eradication wasn’t effective,” he said, “why would they shoot at us constantly?”