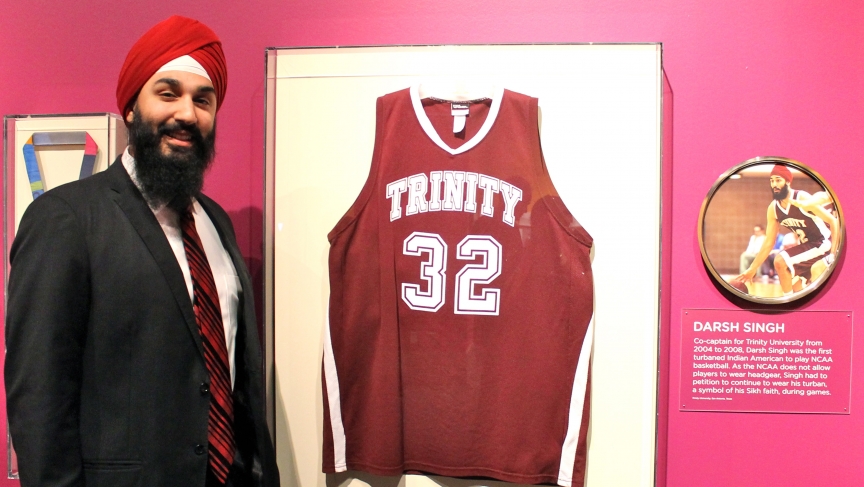 Darsh Preet Singh stands next to his college basketball jersey on display at the Smithsonian's National Museum of Natural History, part of an exhibition on Indian Americans. Singh is the first Sikh American to play basketball in the NCAA while wearing his turban.

At his first high school basketball game, Darsh Preet Singh noticed his coach, the referee and the other team's coach arguing on the sideline. They were arguing about whether Singh could play with that "thing" on his head.

That thing was his turban. Singh, born in San Antonio, Texas, is a devout Sikh whose parents are immigrants from Punjab, India. It wasn't the first time someone commented on Singh's turban.

Back at the high school game, the referee said he needed to see something in writing in order to let Singh play with his turban on. "By this time, my coach was furious. He stormed over to the bench and he picked up the white board where he draws up plays and took his dry erase marker and he wrote in all capital letters across the board: HE CAN PLAY. And he walked back to the ref and put it up in his face and said ‘Here it is in writing!’"

Even though he’s American, Singh says he's always had to prove that he belongs — with his turban. He’s shown birth certificates at basketball tournaments and petitioned the NCAA to let him play with what they called "headgear." At games, people shouted at him to cut his hair or go back to 'his country.'"

Thankfully, he's always had support from his teammates and coaches. "It was always just very interesting to see my teammates’ reactions. Sometimes they were so offended on my behalf, because they just couldn’t understand why people would say certain things to me when they didn’t even know me. Or sometimes they were just so amused it was so outlandish that they really couldn’t just comprehend what was going on."

Singh's mother, Winkey Singh, saw the commotion her son's turban caused in high school and got prepared. "We had to get a letter from the Texas State School Education Board [stating] that he can play with the headgear on," she says. She made copies of that letter and carried them with her to her son's games. "I just wanted to be prepared, so they don't feel hassled and everything goes smoothly." 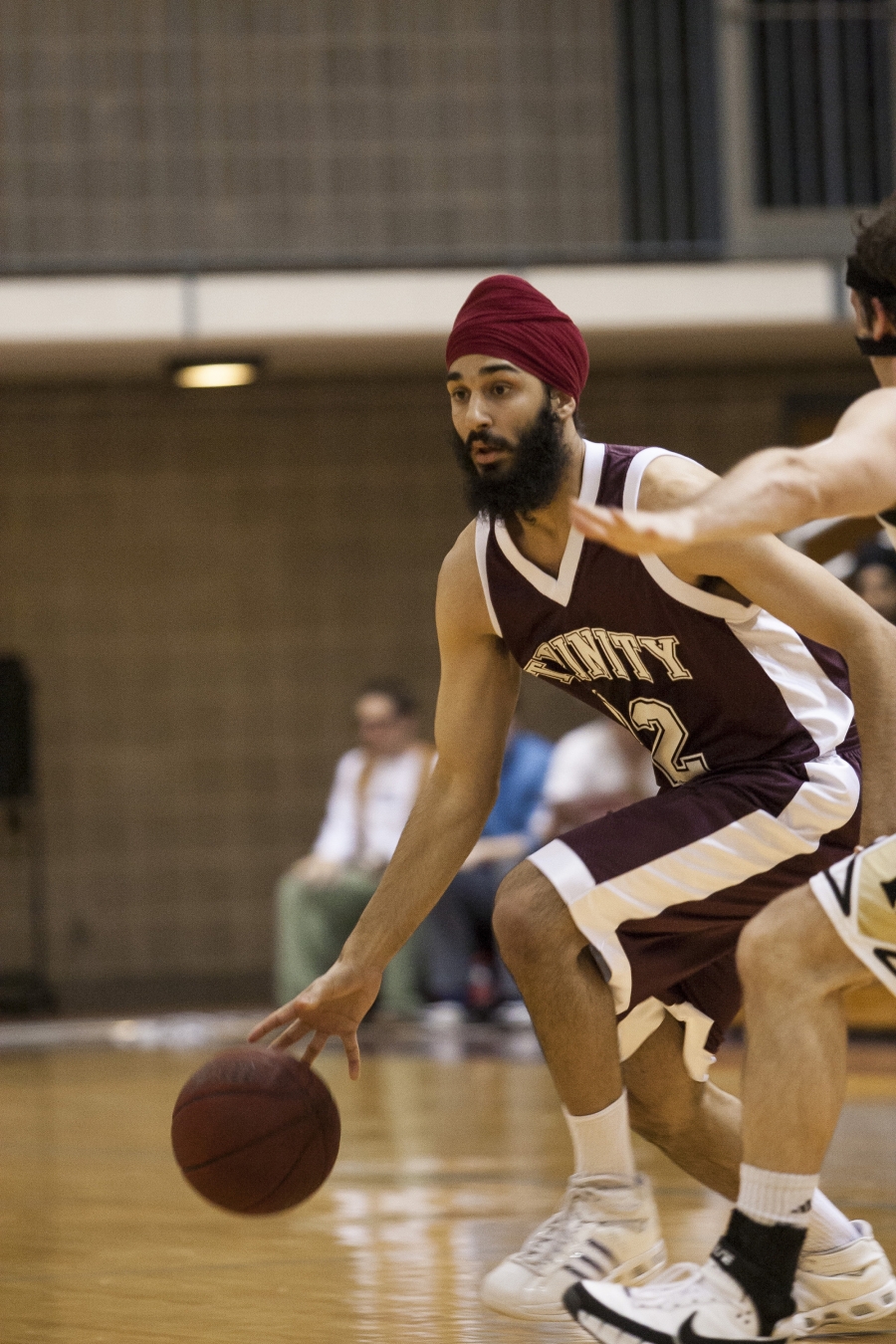 Darsh Preet Singh played for Trinity University in San Antonio, Texas. He went on to become the team's co-captain.

Winkey was very vested in her son's basketball career. After all, she played basketball back in India when she was in high school.

"When we were living in India, I was in high school at that time and there was one Hollywood movie that we saw. And we didn’t understand English at that time, but we saw somebody play [basketball] and we thought ‘That’s a cool sport!’ So we just started at home. We made a little hoop, like a little basket, and started throwing balls in there," Singh's mother says. She even convinced her school gym teacher to start a small team.

Basketball, at the time, was not a popular sport in India. Cricket dominates. But Winkey says she was always taller than the other students and the sport really appealed to her. She played until she got married and moved to Texas with her husband. And it wasn't until her four sons took an interest in the game that she decided to get back on the court.

Winkey's the definition of a basketball mom: She brought orange slices to games, cooked dinners for the team, and came to every single game. "Quite a few times, I’d get wild over there, thump the floors couple of times," she says. "I’ll say, one time I even got the call changed by the ref in one of the high school games — so that was cool!" She has season passes for the San Antonio Spurs team and she says when she can't make it to a Spurs game, she has an app on her cell phone that keeps her updated on the scores.

But Winkey was most excited when her son made it onto his college basketball team. Singh played at Trinity University for all four years of his college career and was the team's co-captain.

Today, Singh works at a consulting firm in Dallas and only plays basketball when he’s visiting his family. But last year, Masum Momaya, a curator at the Smithsonian Institute, reached out to Singh. She was putting together an exhibit at the National Museum of Natural History called Beyond Bollywood, focusing on the history and diversity of the Indian-American community. She wanted to feature Singh's Trinity University jersey. Singh is still the only turban-wearing Sikh American to have played NCAA basketball. "Darsh Singh’s story, I think, is really inspiring and fascinating on a number of levels. I think he’s also a role model in so many ways. So we were really thrilled to come across him," Momaya says.

Singh says he was taken aback by the request. "I don’t really feel like I’ve done anything special. All I’ve done is play basketball, which I love to do." Now his jersey hangs next to a tennis trophy from Rajeev Ram, a professional tennis player. And Singh says that, one day, he hopes his jersey will be replaced by one from the first turban-wearing NBA player.