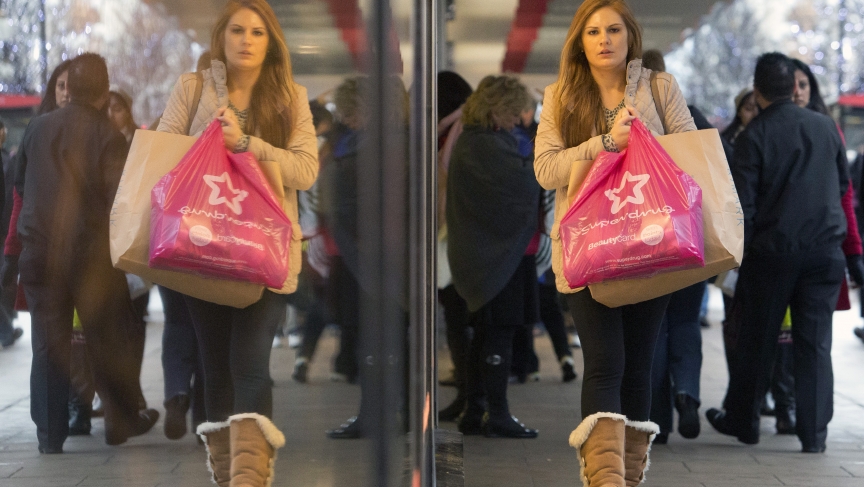 Pedestrians walk past a store on Oxford Street in central London December 15, 2013.

I stood outside some clothing stores in downtown Boston bothering shoppers, asking them if they check the label to see where their clothes are made.

“I look at the price tag,” said one young woman, answering the way pretty much everyone did.

Her friend added, “I look at stuff that I like. It doesn’t really matter where it comes from.”

I also stopped newlyweds Steve and Annie Burkel and asked them the same question: Do they look at where their clothes are made. “Not really, I don’t tend to, no,” said Annie.

I was asking this question because Thursday marks the first anniversary of the collapse of the Rana Plaza garment factory collapse in Bangladesh where more than 1,130 workers were killed, crushed under the weight of concrete. All the people I met in Boston didn’t have any familiarity with the accident, or had a vague recollection at best.

My purpose here wasn’t to make these people seem ill-informed or apathetic. Steve and Annie Burkel both said they’d like to do the right thing and they were aware of the poor working conditions in Bangladesh and other parts of Asia. But, well, it’s just not that straightforward how to support garment workers by making better shopping choices.

“It’s hard for us because unless you’re going to a boutique shop ... [to buy] something made locally, everywhere you go, it seems like something is made in China or Bangladesh,” said Steve.

Bud Konheim has some sympathy for these shoppers. He’s been in the fashion business for nearly six decades and is now the CEO of Nicole Miller.

“The public is not responsible for determining where things are made. That is a phony baloney idea,” said Konheim.  “Nobody is patriotic and pays more for an American car that is worse than a Japanese car. They don’t do it.”

The Nicole Miller brand actually produces the majority of its clothes in New York City, a rarity these days. The company pays its sewers and cutters more to attract talented employees, and this is reflected in the price tag.

“If you’re going to buy something that is somehow ridiculously low priced — go take a look at those factories, that’s where you’ll find your abuses,” said Konheim.

Still, Robert Ross at Clark University in Worcester, Massachusetts, says consumers do have to share some responsibility.

"The average American has eight pairs of jeans,” said Ross. “People should buy fewer and better clothes. That would be good for garment workers.”

But that’s not something a lot of shoppers want to hear. Take Karen, whom I met doing some vacation shopping in Boston. She doesn’t want to buy clothes made in a sweatshop, but she’s doesn’t want to feel like a bad person just for picking up a nice new dress at an affordable price.

“Yes, consumers have a responsibility, but corporations are the ones who can do something about it.”

One problem, though — most American and European clothing brands are removed from the manufacturing process. They either don’t know what goes on in the factories they buy from, or they choose not to investigate.