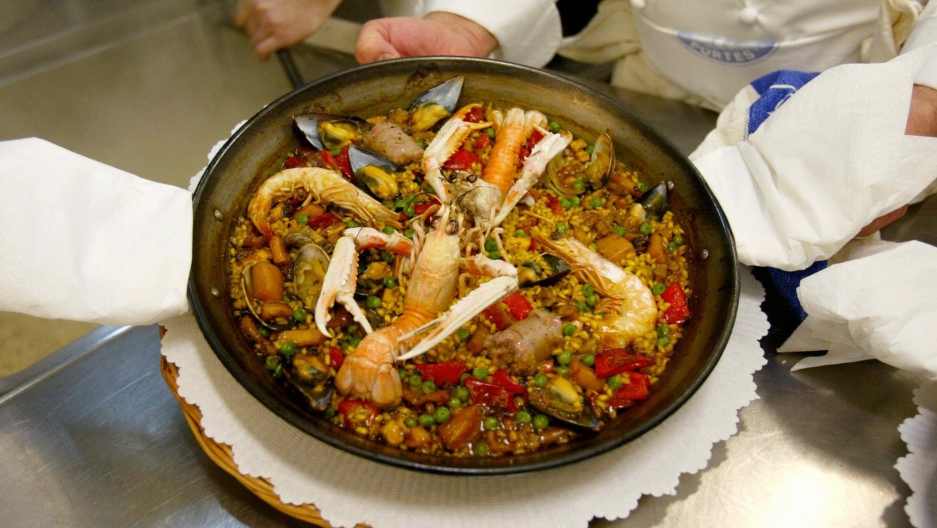 Looks good, but is it real?
Credit: Cesar Rangel
Share

VALENCIA, Spain — Paella has many devoted fans around the world.

However, very few know that eating the saffron rice dish in most places is contributing to the global degradation of one of this country’s signature dishes.

That’s according to three men from the region of Valencia on the Mediterranean coast, where paella originates. They fear it’s being corrupted by tourism and celebrity chefs such as Jamie Oliver.

Now they’re working to preserve the dish’s integrity by launching a website that fights the addition of taboo ingredients like chorizo, avocado and peas.

Condemning such “infringements against authentic paella” worldwide, Wikipaella provides a crowd-sourced portal for those who want to know more about the real thing.

That’s important for co-founder Guillermo Navarro, who says paella is a much-loved symbol of identity for people from Valencia.

“Maybe other countries have a flag or an anthem or a dance, but for us it’s food, which is very important as a society,” he says.

“When we live abroad — and in this time of economic crisis there are a lot of people living abroad — we want to enjoy our culture in its proper place.”

Authentic paella, he says, is “very simple with very basic ingredients, even plain.” More than six or seven ingredients, he adds, is “prostitution.”

“It’s about kilometer-zero gastronomy,” Navarro says, describing the use of ingredients found within a one-kilometer, or half-mile, radius.

Wikipaella has analyzed more than 170 traditional recipes to determine what constitutes authentic paella.

The Spanish sausage is a core ingredient of Jamie Oliver’s paella. The British celebrity chef says the dish is “incredibly flexible” and that you can take “the principal of it” and adjust it to whatever ingredients are available.

Not so, says Navarro. At least not if you want to claim the title of “traditional.”

“I don’t have a problem with Jamie Oliver or any innovation with paella,” he says. “But when Jamie or other chefs say the paella they’ve invented is traditional or authentic, it’s a fail. It’s wrong.”

“That label evokes a kind of heritage, a concept, a meaning that can add to the price,” he adds, “which is cool when it’s true but when it’s false you are lying about price and quality.”

Navarro believes many people in Spain and abroad who want to sample the best of traditional Valencian paella are being ripped off with pricey, poor-quality versions that are nothing like the real thing.

More from GlobalPost: The Battle for Berlin

So where can you find the best paella? Navarro says you’d have to pop over to his mother’s house.

“The best paella in the world is always your mother’s,” he says.

The dish is made on a special wide pan and often cooked on an open fire.

Navarro says paella time — usually on a Sunday, when family members help prepare the ingredients as well as the fire — is “the peak of our culture.”

“It’s a cultural event for us,” he says.

On the off chance you’re not acquainted with his mom, however, you can head to Wikipaella for a list of restaurants offering certified authentic paella in Spain.