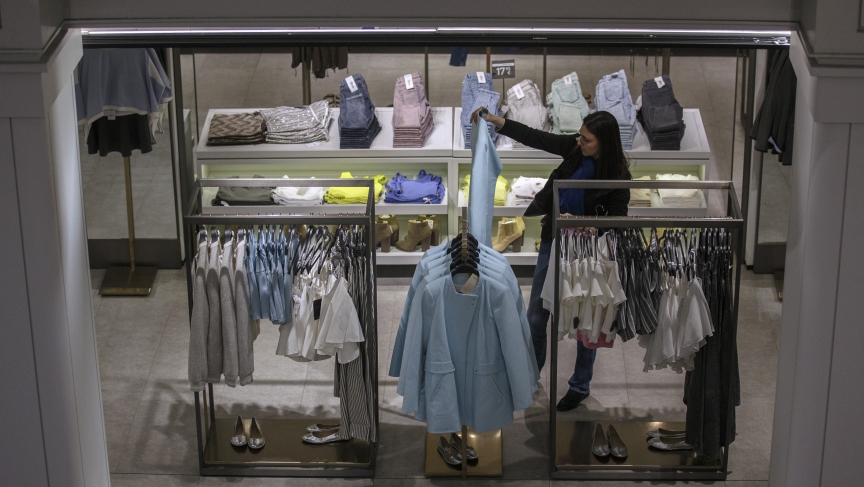 A woman looks at clothes inside a Zara store in central Madrid March 18, 2014.

On the first anniversary of the Rana Plaza disaster — the building collapse in Dhaka, Bangladesh, that killed more than 1100 people and injured 2500 others — I came to work with a bag of clothes to take to a clothing exchange store.

I was wearing an H&M shirt on my back (made in Bangladesh,) Charlotte Russe jeans (made in India) and a zip-up sweater from Gildan (made in Honduras.)

As a 21-year-old college student, I am well aware I am not an ethical shopper. I don’t know many people at my age and with my budget who are.

When we go shopping, we’re looking at the price tag — not the manufacturing tag.

I know my clothes could be made by a 21 year old in Bangladesh or Honduras or in any number of impoverished places. Oftentimes, that garment worker is much younger than 21. I also know he or she needs a job and my western-style, consumerist habits offer that.

That’s the thing. Much of the talk in the US over fair labor practices comes back to location. Companies like American Apparel offer a “sweatshop-free” environment, which is a commendable business practice, but I personally am not drawn to their clothes.

In addition, a “made in USA” label isn’t necessarily the solution, either.

Up until 2009, the Pacific island of Saipan was home to a number of factories that produced a lot of clothing that carried the "made in USA" label. Production of clothing has since stopped, but not before proving that clothing "made in the USA" wasn't necessarily produced in the best conditions. In 1999, retailers including Nordstrom, J. Crew and Ralph Lauren settled a class action lawsuit over factory conditions, which included “beatings, forced abortions, vermin-infested quarters, barbed wire and armed guards,” according to an article from KOMO News.

As the Guardian explained in an interactive documentary, “No one locally wanted the brands to leave ... not the Bangladesh Garments Manufacturers and Exporters Association, nor senior ministers, international trade unionists, independent economists and urban development specialists in Dhaka, nor, indeed the workers.”

This is, to some extent, the argument of multinational organizations and advocates of globalization. The accepted argument is that the only way to escape poverty is rapid industrialization. But does globalization have to come at the cost of human lives? Are humane working practices impossible?

At the end of the day, is that question answered by me? The consumer? Am I willing to spend more on clothing if I am sure that whoever made the clothing has a fair living wage? How much more?

I started by looking at the brands I already purchase.

The Fair Labor Association, based in Washington, DC, awards accreditation to a “company’s compliance program to indicate the presence of systems and procedures required for successfully upholding fair labor standards throughout brands’ supply chains.”

Of the 20 brands on their list, H&M’s Chinese manufacturing program is listed, as is Nike, Adidas and Patagonia.

Patagonia has long been known for its transparency over where its clothing is created and how. Although H&M just recently announced plans to pay a "fair wage," its transparency has been questioned.

Nike and Adidas workers at one factory in China have recently gone on strike. I recognize very few of the ethical brands listed on other websites. Timberland pops up on one list. Dr. Martens vintage collection appears on another.

I know I feel the guilt today, especially as I wrote this post.

I hope, though, that the next time I pass by a large retail store, my guilt will stick. I hope the guilt will challenge me when I see something on sale for half price.

As someone on a budget, who probably will be on a budget for at least the next 10 years, I’ll focus on the things I can do. Buy less clothing. Buy used clothing. Think before I pull out my wallet and start counting coins.

What are you willing to do to change your shopping habits?