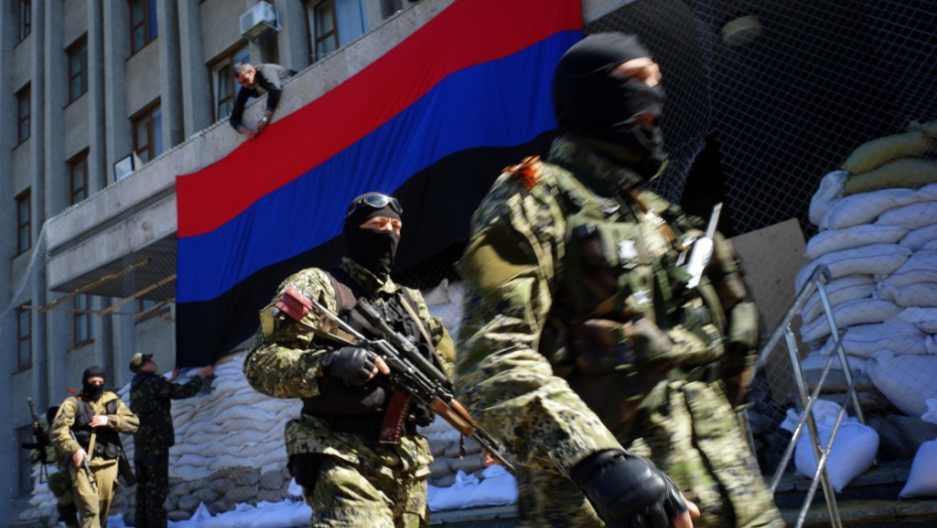 An activist hangs a flag for the so-called "People's Republic of Donetsk" after the regional administration building in the eastern Ukrainian city of Slovyansk was seized by separatists.
Credit: Genya Savilov
Share

MOSCOW, Russia — Will it or won’t it?

As Ukraine slips deeper into crisis over its rebellious pro-Russian east, many are asking whether Moscow’s prepared to invade the region under the pretext of defending its aggrieved Russian-speakers, much as it did in Crimea earlier this year.

Despite the tough talk from top Kremlin officials, some experts say Moscow’s next move is still anyone’s guess.

They argue that besides keeping pressure on Ukraine’s fledgling central government, Russia is leaving its options open.

“The worst thing to do now is to try to predict what the Kremlin will do,” said Alexander Golts, an independent political and military analyst in Moscow.

Russian Foreign Minister Sergei Lavrov’s comments earlier this week — in which he chastised the new Kyiv government for failing to calm tensions in eastern Ukraine after a fatal shooting near a rebel-controlled checkpoint — stirred fears among critics that Russia is inching closer toward an all-out invasion of the region.

Blaming the murky shooting on radical Ukrainian nationalists, he accused Kyiv of being “either unable or reluctant to control extremists."

Lavrov’s comments were especially worrying for those who see Russia’s deployment of tens of thousands of troops on its border with Ukraine as a step toward the same kind of rapid incursion it made into Crimea.

But the so-called Crimean scenario is not on Moscow’s mind, experts say.

More from GlobalPost: 3 things I learned in eastern Ukraine

Russia has also pitched the anti-Kyiv uprising in the east as a peaceful protest against the allegedly nationalist central authorities and in favor of federalization — reform that would hand greater powers to the Russian-speaking regions and ultimately facilitate their closer economic and political ties to Moscow.

Stefan Meister, a senior policy fellow at the European Council on Foreign Relations, says Russia would welcome either of two outcomes in Ukraine, both of which would open it to greater Russian control: federalization or full-on failed state status.

“The current Russian policy is managed destabilization,” he wrote in a recent report. “Russia is trying to undermine the legitimacy of the government in Kyiv by demonstrating that the government cannot control the country.”

A lack of central control over Ukraine’s eastern regions has been on full display in the past week or so, as Kyiv’s stated “anti-terrorism operation” has all but stalled amid a raft of alleged defections or the seizure of Ukrainian troops by local rebels. Divided loyalties — or simply incompetence — among security officers in the region has also seriously hampered the government's attempts to consolidate control.

Fears of escalation grew after Sunday’s mysterious, early-morning shootout left at least three dead and compromised a fragile agreement reached in Geneva last week that required the disarmament of protesters on both sides.

But the instability doesn’t mean Russia’s ready to send in the troops with an eye toward annexing eastern Ukraine.

For one, the region lacks the historical and symbolic significance for many Russians that Crimea held before its fast-track annexation.

Moreover, the apparently motley crew of insurgents and alleged mercenaries there suggests the pro-Russian uprising is “not a carefully choreographed operation” as in Crimea, says Mark Galeotti, a Russian politics expert at New York University.

Yet that very disorganization, he adds, may also lead to “unpredictable steps” — like another prominent shooting — that could force Moscow to adopt “plan B,” or annexation.

“It’s not that Moscow wants to annex, its just that with the circumstances on the ground, it might feel that it’s locked into a position in which it could only fall back — which would be politically disastrous — or move forward,” he said.

Such a move would undoubtedly inflame tensions with the West, which has so far struggled to meet Moscow’s geopolitical challenge with meaningful resistance.

During his visit this week to Kyiv, US Vice President Joe Biden called on the Kremlin to pull its troops back and cut its support for the rebels.

“We have been clear that more provocative behavior by Russia will lead to more costs and to greater isolation,” he said Tuesday.

More from GlobalPost: What Russia really wants with Crimea

That isolation likely means further US sanctions against Moscow, with some officials calling for restrictions on major banks and the country’s energy industry.

If those pan out, Moscow may well have reason to worry.

It’s already pledged billions of dollars this year to prop up Crimea’s crumbling economy and infrastructure, even though top officials say Russia’s economy has already shrunk by 0.5 percent this year and warn of impending recession.

Meanwhile, officials and experts say capital flight could reach about $70 billion in the first quarter of this year, a loss greater than in all of 2013. The World Bank warns the total figure for 2014 could be as much as $150 billion, thanks in part to the economic sanctions the US and EU have already imposed.

According to Galeotti, Putin has "crossed [an] intellectual and emotional rubicon" that's actually led him to underplay the possible negative effects of sanctions.

"He's reached a point where it's not that he doesn't care, I just think he has considerable contempt for what the West could do."