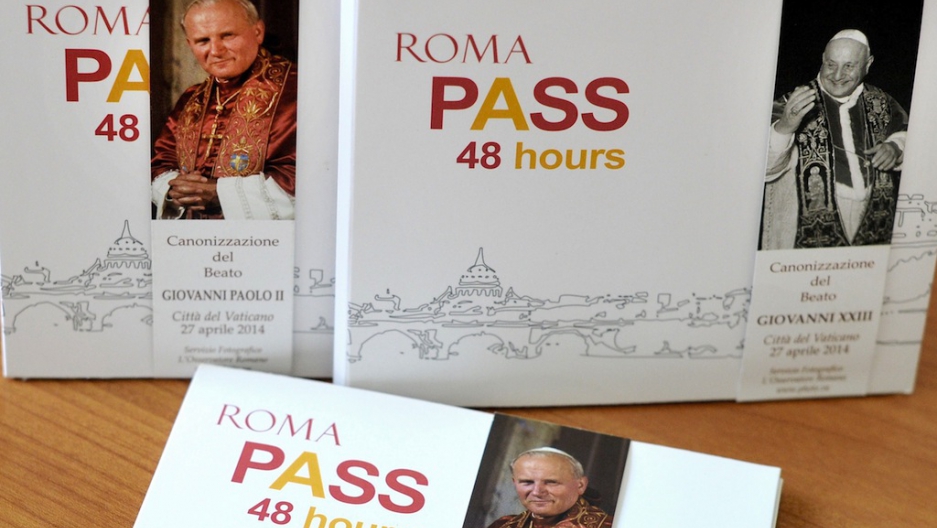 The special edition of a tourist card allowing access to monuments, museums and archaeological sites to be used this weekend when Popes John Paul II and John XXIII will be made saints at an unprecedented joint ceremony on April 27, 2014. The canonizations of two popular popes are set to bring hundreds of thousands of pilgrims to Rome.
Credit: Tiziana Fabi
Share

On Sunday, Pope Francis will elevate two past popes to sainthood, John XXIII and John Paul II, each a figure of major historical weight, each a visionary, each bearing responsibility for the divergent trail of the church beyond their own lives.

Francis’s decision to canonize the two popes on Divine Mercy Sunday is a gesture of unity for a church battered by scandals in the public square by appealing to camps on the left and right who revere the two popes in different ways. It also provides a chance to look closely of the history of both popes.

John XXIII and John Paul II loom as polar figures in the church we know today. It represents the largest faith in the world, one thought for centuries to be changeless, yet a church that has changed constantly, if not utterly, since John XXIII called the Second Vatican Council from 1962-65.

Conservatives decry the council for opening the floodgates of Vatican II, unloosing too much change. They have a point. The church once described as “Here comes everybody” by the noted Irish agnostic James Joyce in Finnegan’s Wake is still a big tent, yet one divided into blue and red followers, like election-time TV maps.

The rock of unity on which Catholics were raised before Vatican II is surrounded by questions. What exactly does the church mean? Whose church is it?

Traditionalists yearn for order, rules and a hard-shelled stance in the culture wars over politics of the human body. In the other precinct of pews, liberals hunger for a church more flexible toward women and gays, with a greater emphasis on justice for the poor and marginalized, particularly clergy abuse victims. But when everyone stands in line to partake of the Body of Christ at communion, the colors meld into the mauve of a gentle twilight.

John XXIII represents the populism of a reform-minded church that he enjoined to “open the windows” to the modern world. He died before Vatican II completed its final session.

John Paul II was a catalyst in the fall of the Soviet Empire and a commanding figure of modern history, a hero akin to Ronald Reagan for conservative Catholics. And yet, the pope who championed human rights for people in dictatorships undercut Vatican II reforms, trying to blunt free speech in the church and using the weight of moral teaching against gays. The clergy sex abuse scandal engulfed the final years of his papacy.

Sainthood in the popular mind suggests Olympian purity and mythic goodness. Yet saints can be stubborn, wily, difficult people who make hard demands of others as they seek to please the Lord.

“My God, what terror I feel!” wrote Angelo Roncalli, a 19-year-old seminarian in Italy in 1900, with no hint of a hope he might one day be pope. “What a mounting heap of sins! How shameful for me, sensitive as I am about my good name and my pride!”

The jottings the young man who would become John XXIII made in notebooks across six decades were published as Journal of a Soul, in 1964, a year after his death. In 447 pages of spiritual searchings, the language is often beautiful but says almost nothing about his daily deeds.

“He saw saw the Jews he saved simply as ‘the relatives and fellow countrymen of Jesus,’” Thomas Cahill, a biographer of John XXIII told GlobalPost. “He left no other work of his own but Journal of a Soul. He was too canny and diplomatic to put his political thoughts in writing.”

Later, when someone asked John XXIII how many people worked in the Curia, he replied, “About half of them.”

As the young Roncalli was helping Jews escape Turkey, a young Karol Wojtyla was studying in a clandestine seminary of Poland amid the deepening darkness of Nazism. As John Paul II he visited a synagogue in Rome as a gesture of spiritual ties. He called for “purification of the historical memory” and issued a remarkable line of apologies, against the advice of cardinals and Roman Curia bureaucrats. He apologized for church sins against Jews, gypsies, Indians and other victims including Galileo, who was convicted by the Inquisition in 1615 for the heresy of claiming that the earth revolved around the sun.

Bishops who have denounced Catholic politicians for being pro-choice have been stained by their negligence in recycling pedophiles. Some bishops have sold churches over parish protests to plug diocesan deficits. These misdeeds have had consequences, emptying many pews.

American Catholics account for about 23 percent of the population, of whom about 40 percent attend church weekly. And roughly 10 percent of Americans describe themselves as former Catholics, according to Pew Research Center data. Across Western Europe, the rate of church attendance has plummeted. The attrition shows passive disaffection; people simply leave.

Vatican II changed the language of the Mass from Latin to the vernacular of a given country, pushed for greater pluralism in a monarchical institution, pronounced lay folk in the pews as People of God, and inspired many priests and nuns into deeper engagement with with politics and social issues.

Pope Francis has revived the focus on pluralism, sending questionnaires to parishes seeking people’s responses on how the church should minister to new expressions of family life, such as gays with children.

His “who am I to judge?” comment about gays boosted his international popularity while making conservatives wary. Yet he has been careful not to transgress John Paul’s 1994 letter forbidding the ordination of women — a decree challenged by scripture scholarship that has unearthed remarkable information on deaconesses in the early church.

After Pope Benedict beatified John Paul in 2011, putting him on a fast track for canonization, abuse survivors raised an outcry over John Paul’s unwavering support of the long-accused pedophile, Legion of Christ founder Father Marcial Maciel.

At a Vatican briefing on Tuesday, Msgr. Sławomir Oder, who worked on John Paul’s sainthood cause, told reporters: “Without getting into details, I can say that the investigation was carried out with the real desire to clear things up and confront all the problems as they came up.... An investigation was carried out, documents were studied, (documents) which are available, and the response was very clear. There is no sign of a personal involvement of the Holy Father in his matter.” Meaning to cover up.

But the details matter. Until the Vatican releases documents to explain why John Paul sheltered a notorious moral criminal, as the prosecution against Maciel stalled under the pope’s watch, his sainthood will be stalked with questions, a trailing credibility asterisk. Why not release the documents? Saints are people, people are sinners. “The Pope goes to confession like the rest of us,” wrote Flannery O’Connor. “The church is mighty realistic about human nature.”

Withholding information is what grubby politicians do. Whatever his flaws, John Paul, a saint come Sunday, deserves better than a continuing cover up.

So do People of God.