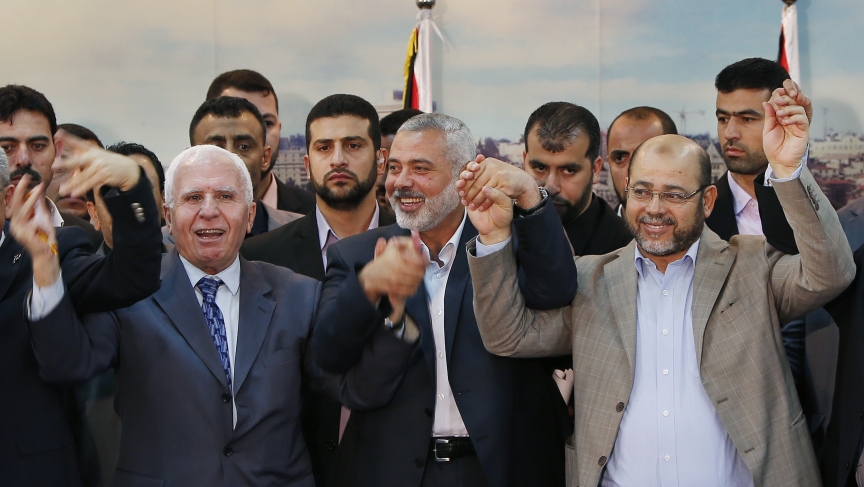 On the very day President Barack Obama starts a much delayed trip to Asia, there's news from the Middle East that may further set back the moribund Middle East peace process.

After meeting in Gaza, the two main rival Palestinian factions — Fatah and Hamas — have come to a new agreement. The groups say they have formed a "unity" government together under the Palestinian Liberation Organization (PLO). Still, deals like this have been announced before, and very little has come from them.

Diana Buttu, a former spokesperson for the PLO and a Palestinian Human Rights attorney, says this is about the seventh time they've announced a power-sharing deal.

"None of those agreements have ever worked out, in large part because of the pressure that is brought to bear on the Palestinian Authority, particularly financial pressure on the part of the Europeans and the Americans who have always threatened to cut off aid if the two factions joined forces," she says.

The Palestinian Authority, and the Fatah party, is the government in the West Bank, while Hamas governs the Gaza Strip. The two factions have been at odds for several years, and many say Wednesday's agreement will not withstand the test of time.

"Neither one of these factions has really come forward and put Palestinians first," Buttu says. "They're talking about power sharing and which ministries they're going to handle, share, and split, but at the end of the day what they seem to ignore is that all of us are living under Israeli military rule. None of them have come up with a strategy as to how they're going to address that military rule."

Buttu adds that neither group has indicated how it plans to uphold the human rights of Palestinians. That issue has been pushed aside as a result of prior leadership splits and ongoing negotiations with Israel.

Israel's Prime Minister Benjamin Netanyahu said Fatah leader and Palestinian Authority President Mahmoud Abbas must choose whether he wants peace with Hamas or peace with Israel, saying both are not possible — a stance Buttu disagrees with.

Buttu says Prime Minister Netanyahu's stance simply serves to provide Israel with a way out of peace negotiations. When it comes to other players at the table — like the United States — Buttu says she does not believe that this agreement will draw Secretary of State John Kerry back into negotiations.

"I don't think he is going to do anything when it comes to this agreement," she says. "The United States has already announced that there are some conditions in terms of recognizing this new Palestinian unity government. What's interesting about this is that these are conditions the United States put into place back in 2006. The fact that the Obama Administration is following in the foot steps of the Bush Administration indicates to me that they're simply not interested in pursuing this any further. This, for them, is the end of the road."