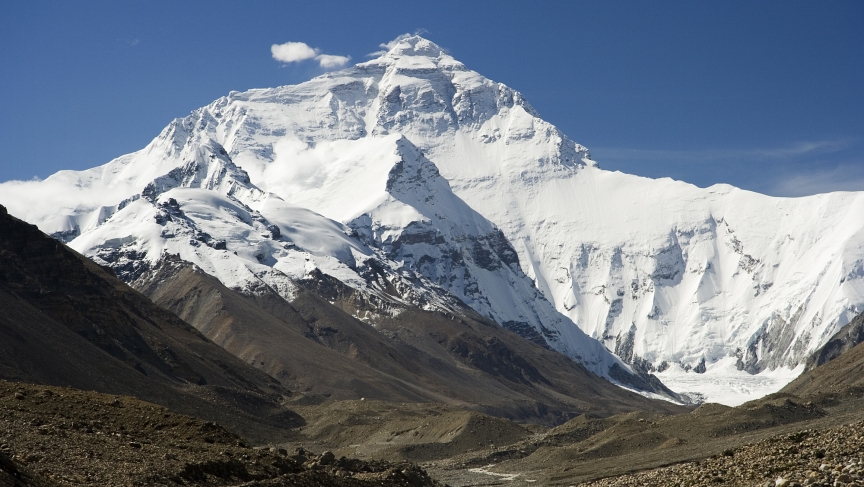 Mount Everest North Face as seen from the path to the base camp, Tibet.

The climbing season on Mount Everest is in question after the avalanche that killed 16 Sherpas on Friday. Many Sherpas are packing up and leaving the Mount Everest Base Camp. As one Sherpa put it, "it's time to give it a rest."

The avalanche on the Khumbu Icefall was the deadliest disaster ever on the world's highest mountain. Those leaving the mountain say they're doing it to honor their fallen brothers.

"There's one or two groups of Sherpas who want to continue to do the climb," says Jamlin Tenzing Norgay, "and there's a majority of them who feel that they should not go up because they do not want to walk on the same path where their brothers are. There are still some bodies that have not been found."

Norgay is the son of the Nepalese Sherpa mountaineer Tenzing Norgay, one of the most famous mountain climbers in history. On May 29, 1953 his father reached the summit of Mount Everest with Edmund Hillary.

Jamlin Tenzing Norgay says he followed in his father's footsteps when he summited Mount Everest in 1996. But he says his trip was more of a pilgrimage than an expedition.

He does not make a living as a moutaineer, like most of the Sherpas who climb the mountain. He says, for them, "It's their bread and butter on the mountain.” But he still estimates that 90 percent of the Sherpas are learning toward not going on any more expeditions this year and instead returning to their villages.

“We believe that maybe they [the Nepalese government] should call off the climbing season this year, as a mark of respect to the people who perished on the mountain while trying to get the Western climbers on the top."

“I think you need to respect their decision and give Chomolungma [the Tibetan name for Mount Everest] a rest for a year." Instead of resuming their climbs, he adds, “some of the western climbers should go to the Sherpa villages and meet the families who've lost husbands and fathers and share their grief with them.“

Without the Sherpas, some Everest expeditions have already been suspended. There are hundreds of foreign climbers idling at Everest base camp trying to decide what to do next. Meanwhile, over on the Chinese approach to Everest's summit, some climbing expeditions are reportedly continuing as normal.

The Nepalese culture and tourism secretary denied that Sherpas had "abandoned all expeditions." Officials will visit the base camp on Thursday to review the activities there.

Norgay says Sherpas are generally treated well on the mountain, but the life insurance they have does not cover very much. If a Sherpa climber dies, he says, the insurance does not pay enough to educate the children or take care of the widows who depend on their husbands as the breadwinners.

"The Sherpas risk their lives more than the rest of the climbers," he says. "They go up the icefall — the Khumba Icefall where the accidents took place — up and down the mountain about 25-30 times in one season, whereas western clients go up on average four to five times."

The debate over compensation and the sizable risks faced by Sherpas could remain front and center for a while. Norgay says the allure of climbing Mount Everest is as strong today as it ever was.