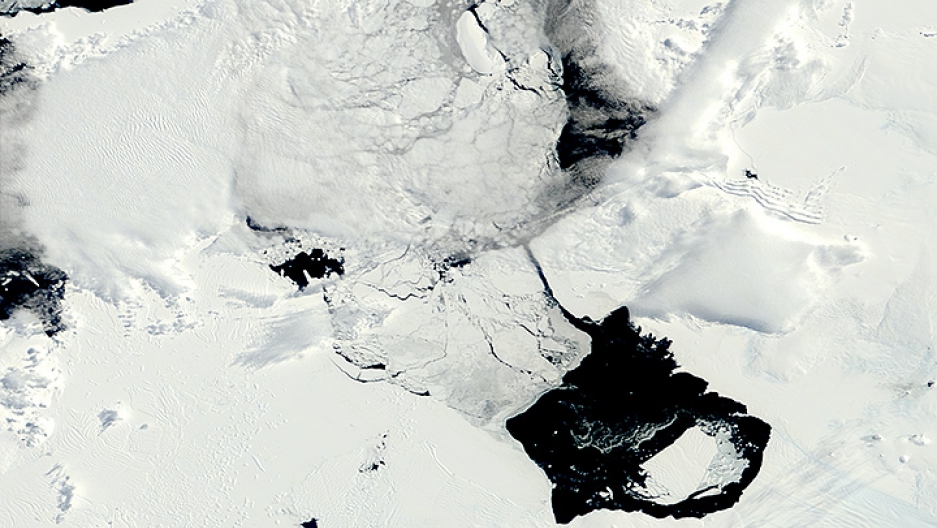 B31 is a large iceberg that calved off of Pine Island Glacier in Antarctica in November 2013. It was six times the size of Manhattan in April 2014.
Credit: NASA images by Jeff Schmaltz, LANCE/EOSDIS Rapid Response
Share

Wish we had better news for you on Earth Day.

Since November 2013, NASA has been tracking what you might call a ginormous (that's a technical term) iceberg that broke off of Antarctica's Pine Island Glacier (PIG).

At 20 miles by 12 miles, the aptly dubbed "ice island" is six times the size of Manhattan, and it has now drifted out to sea. Um, yikes.

Appropriately, the iceberg has a rather post-apocalyptic name. They call it B31.

Above is a glimpse of B31 close to when it first broke off PIG. It's the white chunk afloat in a sea of black in the lower right corner.

How big a deal is this? They don't really know yet.

“However, the detachment rift, or crack, that created this iceberg was well upstream of the 30-year average calving front of Pine Island Glacier (PIG), so this a region that warrants monitoring.”

For the past two decades, PIG has been thinning and draining rapidly. NASA says it may be one of the largest contributors to sea level rise.

B31 "has remained pretty much the same shape since early December and is still about six times the size of Manhattan,” said Grant Bigg, who is leading the team researching B31. “We think it is possibly 500 meters thick.”

Here are more pictures that tell a scary story, the end of which is yet unknown: