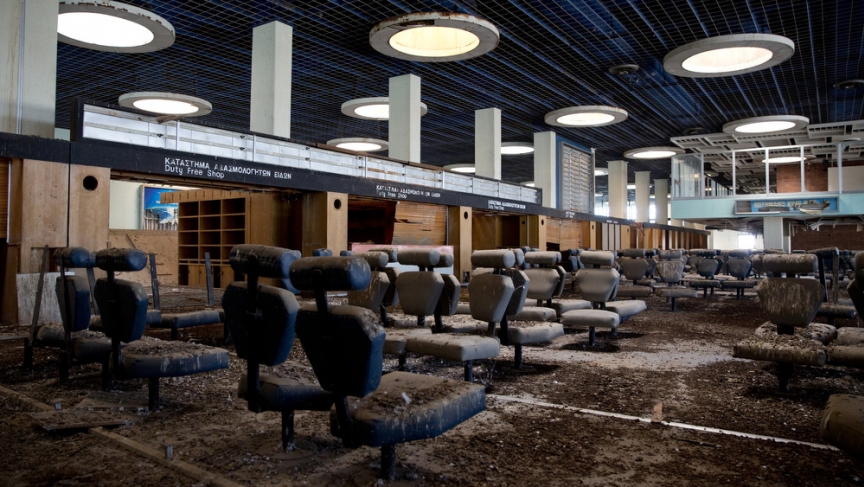 “As a photojournalist, any time you see a sign that says ‘No Photos,’ that’s like a red flag to a bull. It makes you want to find out more,” says Neil Hall, who usually works out of Reuters’ London office.

The “No Photos” sign that piqued Hall’s interest is on the Mediterranean island of Cyprus, where he had been to visit friends a few times. It marks part of the 112 mile long UN-designated buffer zone that bisects the entire island into the Greek Cypriot-controlled south and Turkish-administered north.

The buffer zone was formally established in 1974, when long-simmering tensions between Greek and Turkish Cypriots erupted into violence.

In July of that year, Greek Cypriots staged a coup, with an eye toward uniting the entire island with Greece. Turkey took exception to that and, five days later, Turkish forces invaded the northern part of the country.

The fighting didn't last very long. The UN stepped in quickly, creating a buffer zone along the cease-fire line. According to Security Council Resolution 353, the zone "is to be entered by no forces other than UN peacekeepers."

Fast forward 40 years, and the zone is still there, still patrolled by UN peacekeepers — and off limits to almost all Cypriots.

And he wanted to open that time capsule.

Hall pitched the idea to his bosses at Reuters, as part of an in-depth photojournalism project called The Wider Image. They said yes and Hall started filling out all the requisite UN paperwork, along with the documents required by the respective authorities that run each side of the island.

He spent a day at the Nicosia International Airport, which has been a UN Protected Area now for four decades. Hall's photos show a 1970s era jet still sitting on the tarmac near the terminal, as if waiting for passengers to board.

“It struck me like a zombie movie, where there’s no one around. The departure lounge was full of pigeons and other animals. And, I believe, in less populated parts of the zone, it’s becoming something of an unofficial wildlife sanctuary. So few people go there that the wildlife has been able to take over again.”

The locals call the buffer zone “The Green Line,” which takes on a whole new meaning given the flora and fauna takeover.

Hall's photos also show what are now considered vintage cars, covered in dust. There are advertising posters, soda bottles, stacks of old televisions straight out of the 1970s.

But it's not all nostalgic fun in the buffer zone, especially in the capital Nicosia.

“Nicosia calls itself the last divided capital in the world,” Hall says. In fact, the buffer zone splits the main commercial street in two.

“That was the borderline between where the two sides were fighting, so it was almost like a time capsule of guerilla warfare. Houses had been sandbagged up, and firing positions were put into windows. There were bullet holes everywhere.”

In all, the buffer zone takes up more than 130 square miles of Cyprus. At some points, it's a few miles wide. In other parts, though, it’s only a few feet wide.

Hall remembers walking down a narrow part of the zone, with balconies stretching out across the street toward each other. His UN escorts told him this is referred to as “spear alley.” The Greeks and Cypriot forces were on opposite balconies, close enough to put bayonets on the ends of broomsticks and jab at each other across the street.

In 2003, the Greek and Turkish sides agreed to open more checkpoints through the zone to allow Cypriots to travel back and forth between north and south more easily.

Neil Hall spent about a week in Cyprus taking shots in and around the buffer zone. In one of his favorite shots, some kids play on swings in a playground. Behind the kids, you can see a UN guard tower and a fence topped with razor wire, demarcating the buffer zone.

“That picture just said to me how daily life just goes on in Cyprus, even though the country is divided. And then there’s this extraordinary situation where the country has this enormous tract of land that the inhabitants can't even go into.”

“For Cypriots,” Hall says, “I think it's just a fact of life. Many people I spoke to said they wish the island could be united again, but they didn't know when that would occur.”

To be fair, there are a few villages within the zone. And one, called Pyla, is billed as the only spot on the island where the original Greek and Turkish populations still live side-by-side.

The UN's mandate in the zone remains the same as it's been for 40 years: working toward "a return to normal conditions."

Earlier this year, after an 18 month hiatus, reunification talks resumed between the Greek and Turkish sides.

One thing's for sure: If Cyprus does reunite, there's a big stretch of land through the middle that's got 40 years of catching up to do.