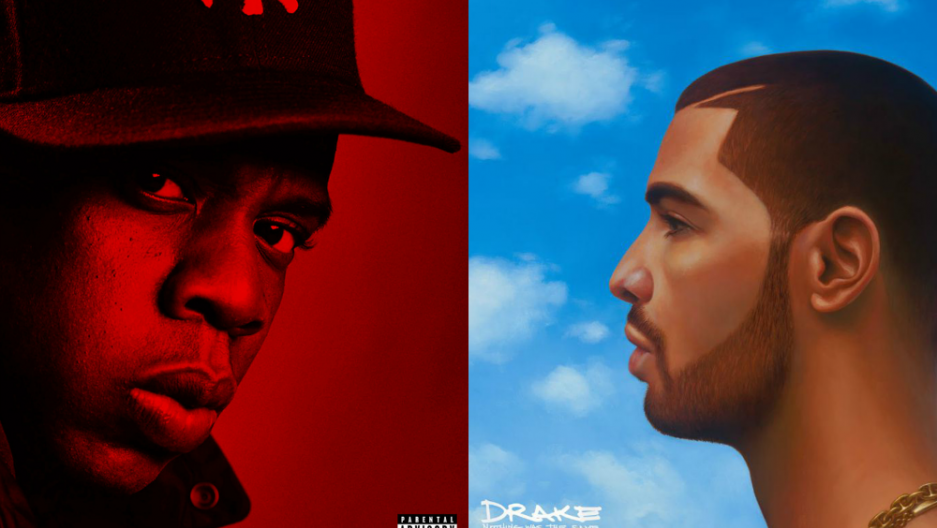 album art for Kingdom Come and Nothing Was The Same

Tonight the Toronto Raptors and Brooklyn Nets meet for the second time in the first round of the NBA playoffs. The teams have ties to two of the biggest names in hip-hop: Drake is a Raptors "ambassador" and until recently, Jay Z owned a very small piece of the Nets. The NBA playoffs usually elevate everyone's game, and with a beef brewing between Jay Z and Drake, there's hope that this year the playoffs will elevate the rap game, too.

Drake gave us hope during Game One while providing commentary for Canada's TSN:

Drake gets a big laugh out of his fellow broadcasters when he quips, "Jay Z's somewhere eating a fondue plate." No word on whether Jay Z actually eats fondue (though he does "check cheddar like a food inspector"), but his raps of late have leaned heavily on bragging about his material wealth, sometimes to the point of alienating his fans. Meantime, Drake has been winning acclaim with deeply personal lyrics about his relationships, recklessness, and struggles to cope with fame.

The last time Jay Z had a rap beef, it led to the best music of his career. It was the early 2000s, his foil was Nas, and (unlike beefs in the 1990s) the hostilities never turned violent. In 2001, Nas took plenty of shots at Jay Z on theStillmatic diss-track, "Ether" and Jay disassembled Nas (while channeling David Bowie's "Fame") onBlueprint's stand-out track, "Takeover":

So yeah, I sampled your voice, you was using it wrong
You made it a hot line, I made it a hot song ...
Use your brain! You said you been in this ten
I've been in it five --- smarten up, Nas
Four albums in ten years, nigga? I could divide
That's one every, let's say two, two of them shits was due
One was --- nah, the other was Illmatic
That's a one hot album every ten year average

In the decade since, Jay Z's reign hasn't been challenged much.In 2011, he and Kanye West released Watch the Throne, his most inspired work in years. Its recurring themes of abundance, supremacy, and paranoia were mostly aimed at Jay's young challengers, Lil Wayne and Drake. While Wayne has been plagued by an ill-advised rap-rock album and health issues, Drakehas shown himself to be a formidable rival, with platinum albums, endorsements, comedic turns on late-night television, and a Grammy.

Unlike Jay Z's rivalry with Nas, the competition with Drake has inspired collaboration.Jay provided a verse on Drake's latest album, Nothing Was the Same, and Drake lent vocals to Jay's better half on "Mine." Yet recently, the rappers have fanned flames in interviews and verses. Drake chided Jay for rapping too much about his art collection in Rolling Stoneand Jay responded in rhyme on "We Made It," a collaboration with Jay Electronica:

Sorry Mrs. Drizzy for so much art talk
Silly me rappin' 'bout shit that I really bought
While these rappers rap about guns they ain't shot
And a bunch of other silly shit that they ain't got
I'm on my Lupita Nyong'o
Stuntin' on stage, got the 12 Years A Slave
This ace of spades look like an Oscar
Black tux, look like a mobster

The best hip-hop has been inspired when rappers have had something to prove. B.I.G. released Ready to Die at the peak of his coastal rivalry with Tupac; Kanye West's The College Dropoutresulted from years of being told he would never be more than a producer. Drake and Jay Z will never again need to prove themselves as artists, but let's hope this year's NBA playoffs give rise to some classic barbs that raise everyone's game and take hip-hop to a new level.