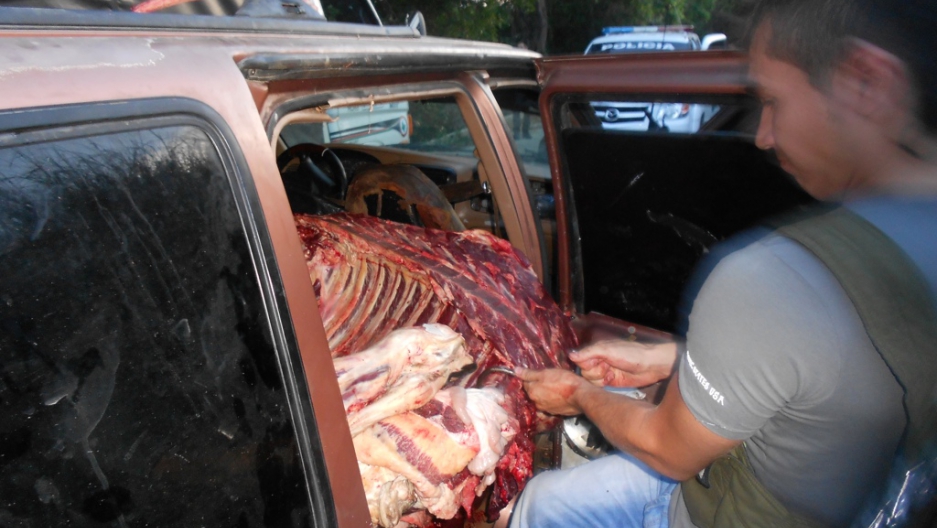 Editor's note: This story is the second in a two-part series on Venezuela's chronic shortages, reported on both sides of the Colombia-Venezuela border. See part one here.

CUCUTA, Colombia — On a dirt road used by smugglers, Colombian police stop a rickety Ford Explorer packed with sides of beef from Venezuela. It’s not the most sanitary way to import food: The truck’s seats and doors are stained red from the raw, unwrapped meat.

There’s more to come. As the police question the driver of the Explorer, a 1970s-era Dodge van pulls up. It’s filled with contraband passion fruit and yellow onions.

The smugglers protest, to no avail. In the tropical heat, several agents strip to their T-shirts and shorts to heave the 80-pound sides of beef onto a police truck, while other officers impound the fruit-and-onionmobile.

But this bust is the exception. Some 30 smuggling routes connect the Colombian border city of Cucuta with Venezuela and there are not enough police to patrol them all. One result is that tons of contraband Venezuelan food, from chicken and cheese to rice and powdered milk, arrive in Cucuta every day.

Contraband is a fact of life along international borders. In fact, Cucuta has long been a haven for gasoline smugglers who purchase the government-subsidized fuel for pennies a gallon in Venezuela, then sell it out of plastic jugs in Colombia. Not surprisingly, hardly anyone visits Cucuta’s 12 legitimate service stations where gas costs about $4 a gallon.

Smuggled gasoline from Venezuela for sale on the streets of Cucuta, Colombia in 2009.(AFP/Getty)

Due to some of these same price dynamics, the incentive to smuggle food from Venezuela is now growing. Government price controls and wild currency fluctuations mean that low-cost Venezuelan groceries can be sold for up to 10 times their original price in Colombia, where food is more expensive.

More from GlobalPost: Attention Venezuelan shoppers, will this ID card keep you loyal to the revolution?

“Almost everything here is Venezuelan,” says one Colombian merchant who sells flour, sugar and other foodstuffs from a bodega located a few blocks from the international bridge connecting the two countries.

The smuggling has aggravated food shortages in Venezuela, an issue that helped spark two months of violent anti-government protests that have left more than 40 people dead. Meanwhile, legitimate supermarket owners on the Colombian side of the frontier complain they’re being undercut by smugglers.

“This is terrible for storeowners. It has led to a huge contraction of the local economy,” says Rodolfo Mora, who heads the Cucuta branch of Colombia’s National Merchants Federation.

So far this year, police have confiscated 38 tons of meat, 34 tons of cheese and 164 tons of fruit and vegetables.

Officials from both countries acknowledge that corrupt border guards facilitate the underground food trade in exchange for payoffs.

Col. Rodolfo Carrero, chief of Cucuta’s border police, says criminal gangs that traffic drugs are also deeply involved. He points out that on top of the huge profits, the risk is low because there is no threat of harsh prison sentences or extradition for smuggling groceries.

Carrero says that smugglers must be caught red-handed with at least $14,000 in contraband before they can be arrested.

Smugglers use everything from tractor-trailers to motorcycles that cross back and forth 20 times a day to move their goods. It all adds up. So far this year, police have confiscated 38 tons of meat, 34 tons of cheese and 164 tons of fruit and vegetables. The border chief says the food gets a sanitary inspection and, if deemed safe to eat, is donated to charities and government institutions.

Carrero admits that far more Venezuelan food makes it across the border undetected. But he says a more forceful response by authorities could backfire. So many residents along the border make a living off smuggling that a sustained crackdown would throw thousands out of work. During past law enforcement operations, protesting “contrabandistas” have burned down customs posts and attacked police officers.

In Venezuela, meanwhile, the smuggling is part of an intense debate over what lies behind the country’s food shortages.

Government officials blame the shortages on unscrupulous businesspeople who they claim are hoarding and smuggling goods.

“A lot of this is part of an economic war designed to throw the country into chaos,” President Nicolas Maduro said in a September speech. “The parasitic bourgeoisie of Venezuela thinks that if they can bring chaos to the country, then political power in Venezuela will be served to them on a platter.”

As he waits in a long line outside a state-run supermarket on the Venezuelan side of the border that sells low-cost food, shoemaker Mario Hernandez agrees. “This part of the country is an opposition stronghold.” Smuggling, he says, “is a way to bleed the country.”

Another shopper in the line adds: “Everything is being smuggled and we end up suffering.”

But many residents in San Cristobal pin the blame on the government’s socialist economic policies. Indeed, food shortages along with high crime and inflation helped trigger Venezuela’s anti-government demonstrations that first broke out in this city in February.

Although police and National Guard troops now patrol the streets, sporadic demonstrations continue in San Cristobal and other cities. At one protest march, university professor Ines Ferrero points out that even as it seeks to blame others for the country’s economic woes, the government has taken greater control over the levers of the economy.

For example, some farms and food processing plants have been expropriated, yet their output has fallen. Venezuela has one of the highest inflation rates in the world but price controls on basic foodstuffs — which are designed to help poor people — discourage private food producers who claim they can’t make a profit. The government also limits access to US dollars, making it harder for businesses to import food.

Smuggling between Colombia and Venezuela “has always existed,” Ferrero says. “That is not the problem. That is not a good excuse for the shortages.”

Whatever the cause, the end result is that some Venezuelans are now crossing into Colombia to purchase marked-up Venezuelan food.

“If we can’t find powdered milk here we find it just across the border, but at two or three times the price,” says Jose Rizo, a Venezuelan businessman who lives in the frontier town of San Antonio del Tachira. “It really makes me angry.”