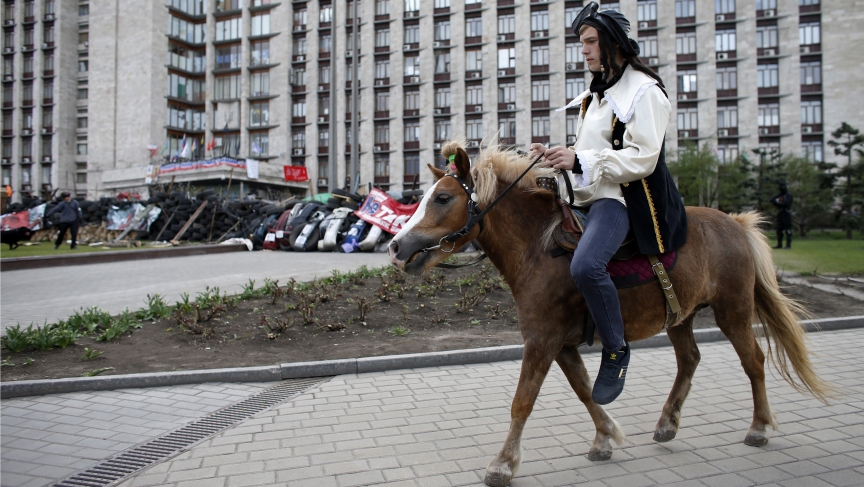 A man rides a pony near a barricade outside a regional government building in Donetsk, in eastern Ukraine,April 20, 2014. At least three people were killed in a gunfight in the early hours of Sunday near a Ukrainian city controlled by pro-Russian separatists, shaking an already fragile international accord that was designed to avert a wider conflict.

Vice President Joe Biden says it's time for Russia to "stop talking and start acting" to diffuse the crisis in Ukraine. Biden made the statement in Kiev — where he's visiting to demonstrate American support for the interim Ukrainian government.

The US wants Russia to do more to implement the so-called Geneva accord, which calls for pro-Russian militants to leave government buildings they're occupying in eastern Ukraine.

But that's not happening, according to the BBC's Natalia Antelava, who's in the eastern city of Donetsk. Antelava says pro-Russian separatists have taken control of government buildings in at least 11 cities. That number isn't going down, either. It's up from just a couple days ago. The White House says the men are not acting alone, and that Russian special forces are actually the ones behind many of the demonstrations.

We reported earlier that Ukrainians in Donetsk aren't known for their political engagement. But it looks like these protesters, whoever they might be and wherever they might be from, are digging in for the long haul.

"There is absolutely no sign the protesters are leaving," says Antelava.

The protesters say they will only leave when the government in Kiev leaves.

"As far as they're concerned, the government in Kiev is also occupying the government buildings there illegally," she says. "So it's a bit of a deadlock."

But Antelava says it's not this black and white. Some of the protesters she talked with are a little nervous. They're unsure how much support Russia is willing to give them. Ironically, Antelava says lack of support from the West is the top concern of pro-Kiev people in Donetsk.

Antelava says the perception of the West in Donetsk, and other parts of eastern Ukraine, is one of the most fascinating things for her to report on. People think Kiev is full of neo-Nazi fascists waiting to take over eastern Ukraine. "That's the sense you get at pro-Russian rallies. It's genuine hatred," she says.