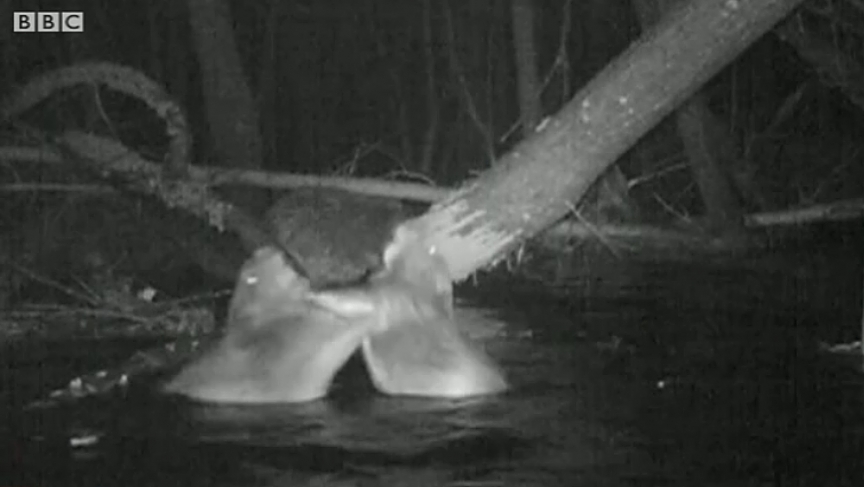 This apparent family of beavers are the first seen in the wild in England in roughly 500 years. They were discovered by retired ecologist Tom Buckley, who installed motion sensor cameras, caught the beavers on tape and gave the images to the BBC. "It’s a great achievement that they’ve managed to come back," Buckley says.

Just about every day, ecologist Tom Buckley takes a walk along the River Otter, in the town of Ottery St. Mary in western England. And late last year, he noticed something strange — a few trees were missing on the riverbank.

Their stumps appeared to be gnawed into sharp points, and an absurd thought ran through his mind — that it was the work of a beaver.

He says he couldn’t really believe that, since the once-common animal was hunted to extinction in England several hundred years ago.

So Buckley installed motion sensor cameras. Caught on tape was a single European beaver, then three — possibly one juvenile and a pair of adults — cutting down a tree, and then happily embracing each other.

“They seem to have come to focus on this tree,” Buckley says, “to look at the potential perhaps of a new home. And they seemed to be so happy at what they’d achieved here. It was marvelous to see.”

The images made national headlines and turned Buckley into something of a celebrity among the townspeople, who call him “the beaver man.”

Buckley himself seems overjoyed at the beavers’ unexpected return.

“It seems to me to be a great addition of an animal that man, due to his greed, once made extinct,” he says. “It’s a great achievement that they’ve managed to come back. But I’m very greatly distressed that the government may take a heavy hand and, potentially, take away these beavers.”

There’s been no official statement yet from wildlife authorities. But, technically, these beavers aren’t supposed to be here. No one’s sure where they came from. A nearby wildlife center says it hasn’t lost any.

And there has been a long, contentious debate in England over whether to reintroduce  beavers, as has already happened in Scotland.

One side says, "Yea." The other says "Nay." And on the River Otter, it looks like someone may have just gone ahead and done it — which doesn’t sit well with some in the Nay camp.

“The whole of the island of Great Britain will be affected by this,” says Nick Yonge, who is mostly among the Nays.

Yonge is with the Tweed Foundation, an organization concerned about the impact beavers could have on migratory fish, such as salmon and sea trout. He recognizes the fish and beavers coexisted for tens of thousands of years, but he's not so sure how they'd coexist now.

“The main thing that beavers do, and I think everybody knows this, is build dams,” Yonge says. “They have a huge effect on altering the environment. And the problem with these dams is that they’re very effective blockers of fish passage.”

Others worry about the loss of trees and flooding, a problem England has suffered a lot from lately.

But Derek Gow, firmly in the Yea faction of the beaver debate, has a stiff rejoinder to these concerns.

“That's just a crap argument,” says Gow, a conservationist who’s campaigned for the reintroduction of beavers since the 1990’s.

Gow says beaver dams would actually reduce flooding by holding water. And he says fears about beavers arise from the fact that, after centuries living without them, people have forgotten what the animals actually do.

“They think it’s some sort of Godzilla-type thing that’s going to rip babies out of prams, and kick down the Houses of Parliament, and chop down every tree there is in the landscape,” Gow says. “And that’s just ridiculous!”

Gow himself keeps about 20 beavers on his farm some 50 miles from the River Otter, in large, enclosed habitats. He uses them to show what he says are the animals’ environmental benefits.

In a narrow streambed, he points out a spot where a pair of his captive beavers has transformed a simple watercourse into a series of small dams and pools.

“You can see just standing here, you get deep water, shallow water, fast water, slow water,” Gow says. “A whole variety of ecotopes. But it’s all down to the beavers. And those wetlands are very good for a host of other species,” like different types of fish and amphibians.

A year ago, he says, before the beavers got to work, “that couldn’t be here. There was no prospect of that surviving because there was one single watercourse and it would just blast all their eggs out.”

The pools, he says, allow the amphibians to safely lay their eggs. “And these will become tadpoles … and more and more amphibians will come every year. Without the beavers, none of this happens.”

Just an example, Gow suggests, of what would happen if beavers again proliferated in the wild in England.

As for the wild beavers that have suddenly showed up on the River Otter, Gow says he didn't release them. "It would have been nice if the species could have been officially reintroduced."

And he thinks they shouldn’t be removed just because someone didn’t fill out the right paperwork.