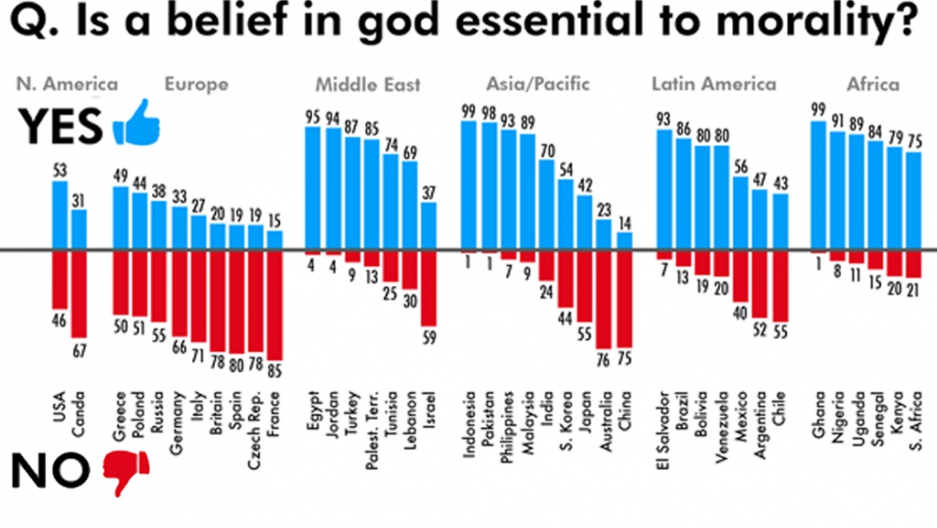 The graphic above is based on a study conducted by the Pew Center, as part of their Global Attitudes Project. In 22 of the 40 countries surveyed, there's a clear majority that believes god is essential for people to have morals.

The Western world largely polled with the consensus that belief in god is not essential to morality, though the results for the US were roughly equal on both sides.

Africa is by far the most convinced that believing in God is the only way people can be good, with the Middle East being a close second.

Israel is an interesting outlier in this part of the world, being the only country surveyed in the region that feels their morality isn't dependent on religion.

Most of Latin America and Asia also believe that morality and god are tied together, with only two or three exceptions in each region.

The Pew Center study also looked at how wealth, education and age affect how populations answer this question.

According to Pew, populations in richer nations place less of an emphasis on a belief in god than people living in poorer nations. The only exceptions to this rule are America and China where, "Americans are much more likely than their economic counterparts to say belief in god is essential to morality, while the Chinese are much less likely to do so."

The survey also found that people over the age of 50 were much more likely to link god and morality than the younger generation. In Greece, for example, 62 percent of older adults feel god is essential while only 29 percent of 18-to-29-year-olds have the same opinion.