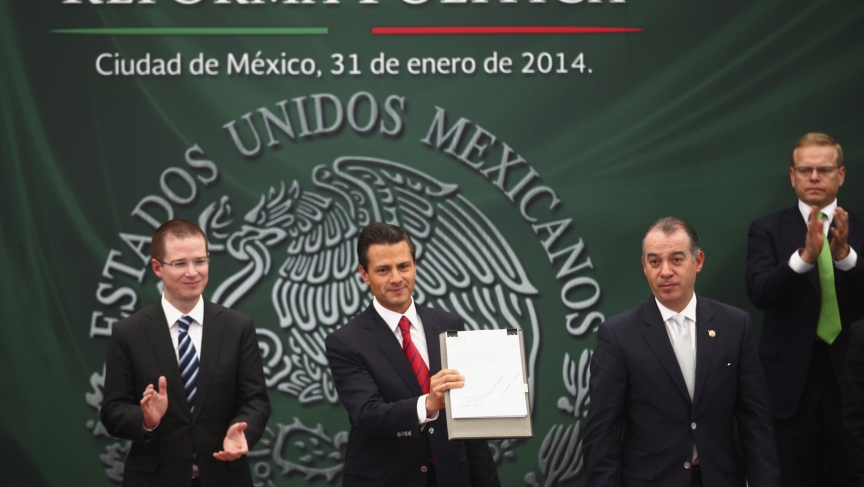 Many believe the NSA overstepped US law in secretly collecting cell phone and Internet data. Mexico's government doesn't want to make that mistake. So it has proposed a telecommunications reform bill that gives it plenty of freedom to spy and even disrupt electronic communication.

Among its more startling components are explicit permission for government officials to store two years of cell phone communications, to disrupt cell phone signals during protests, and to censor websites that officials believe violate good customs and morality.

Mexico's youth aren't pleased with what they see as an effort to limit their free expression — and they've taken to the streets in protest, according to Vice. The bill, proposed by President Enrique Peña Nieto, will go before the Senate in the weeks ahead and activists hope it will be voted down.

em>(Editor's note: The Global Scan can be delivered straight to your inbox every weekday. Just register and sign up today.)

Irma Krat was reporting in the eastern Ukrainian city of Slovyansk when she was seized by pro-Russia militants. They say they are investigating whether she committed "war crimes" during the revolution that led to the overthrow of former Ukrainian President Viktor Yanukovich. Krat was dragged before other reporters, where she said she was being treated "alright," before being led off again by the militiamen.

The pro-Russia east has been agitating for independence from the more EU-oriented western portion of the country. Krat is the second journalist believed to be held in Slovyansk, according to the Independent — but she's the first to be paraded before reporters.

If you're pregnant in India, you'll want to know the number for the Janani Express

India's maternal mortality has been uncomfortably high — often because women in rural areas give birth at home, where there's no nearby help if something goes wrong. In an effort to reduce the risks for mothers and babies, the province of Madhya Pradesh created the Janani Express — a private ambulance service that serves expectant mothers in the months before and after birth, and shuttles them to hospitals when they go into labor.

PRI's The World reports on the startling reduction in maternal mortality this new service has produced — lowering maternal mortality rates as much as one-third. This is the latest installment in our special series on pregnancy and childbirth, The Ninth Month. Learn more about pregnany around the world at pri.org/ninthmonth.

Oliver Stone, the American Oscar-winning director behind films like Platoon and Born on the Fourth of July, struck out at what he says is the Chinese film industry's failure to address the country's more controversial past. Specifically, he says, he wants a Chinese director to take a critical look at Chairman Mao Zedong and his cultural revolution, according to the South China Morning Post. A Chinese director hit back, asking how Stone would feel if a Chinese director made a movie about 9/11.

Predictably, the tit-for-tat has inspired a strong reaction on Weibo, the Chinese social media service. Many, though, are taking Stone's side — calling for a more honest look at China's history.

Sometimes poetry and watercolors are better at explaining science than words

NOAA scientist Greg Johnson played a lead role in writing the first section of the recent Intergovernmental Panel on Climate Change (IPCC) Fifth Assessment, but even he found it a little dense at times. So one afternoon, he decided to try and turn the report into poetry. Haiku, in particular. And rather than leave it at words, he painted watercolor illustrations to accompany the haiku.

PRI's Living on Earth has a handful of his haiku and illustrations — which just may give you a better idea about the possibilities from climate change.

What would your city look like without lights? Photog Thierry Cohen's Darkened Cities: http://t.co/7tE8JggRiN #sidewaysglance

If you want to catch a glimpse of the Lyrid meteor shower, tonight is the night. The annual event will peak in the pre-dawn hours of Tuesday, according to Space.com, and will actually be visible from your computer. Both webcasts begin at 8 pm Eastern Time, and go all night.