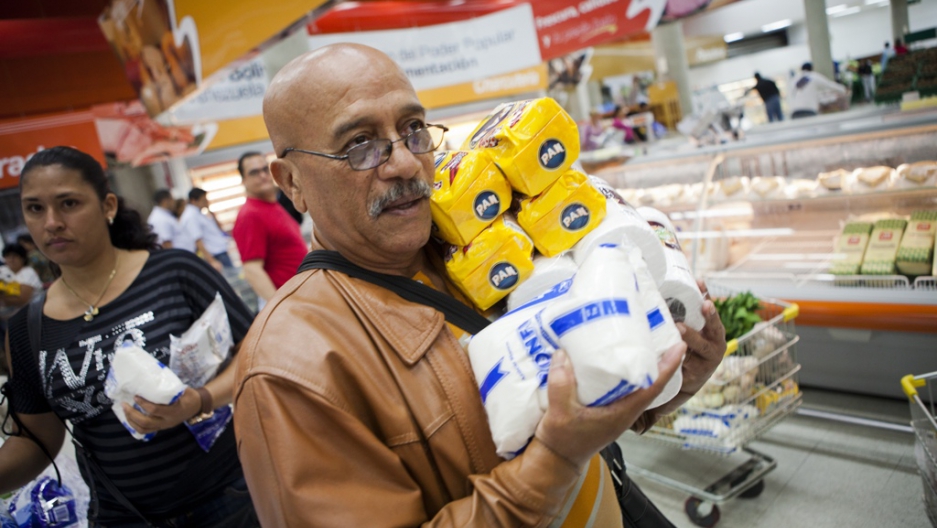 Editor's note: This is the first in a two-part series on Venezuela's chronic shortages, reported on both sides of the Colombia-Venezuela border, originally published in April. See part two here.

CARACAS, Venezuela — Government volunteers are stationed at the entrance of a small supermarket in the 23 de enero neighborhood, and they’re checking fingerprints and ID cards.

They’re handing out loyalty cards that promise shoppers bargain prices and the chance to win amazing prizes: a new car, or even a house.

But customers can only use the card once a week and for limited products. And there’s another catch. It enables the Venezuelan authorities to keep digitized tabs on them lest they try to buy up tons of precious, government-subsidized produce and sell it elsewhere for profit. It’s rampant hoarding, the government says, that’s causing severe shortages of everything from chicken to toilet paper.

“This is an electronic banking card system to guarantee satisfaction for all your working family needs, and end speculation and smuggling,” said President Nicolas Maduro, announcing the idea last month.

Satisfaction does seem in shorter supply than usual in this country that has ranked South America’s “happiest” country. A lot of that is economics. Food and other basics have been disappearing from Venezuela’s shelves. That’s just one item on a laundry list of woes fueling street protests in parts of the country for two whole months.

Another problem is inflation. The country's central bank puts price rises over the last 12 months at a 57.3 percent, one of the world’s highest rates. The opposition accuses the Maduro administration of withholding the latest data — which opposition members say is more than 60 percent — because it would be politically awkward. That’s been a sticking point in new negotiations, mediated by neighboring governments and the Vatican, to end Venezuela’s drawn-out political crisis.

Deflecting blame, Maduro faults US-backed Venezuelan elites for troubles like shortages and soaring inflation. He says this card will help shield the people from an “economic war” the oligarchs are waging.

But the ID could serve another function: a “ration card,” critics say, similar to what the United States and Britain implemented in World War II — or, closer to home, like "la libreta" in Cuba.

You don’t have to look far to notice a wartime-like scarcity. There’s even a mobile app that tells you where to find scarce products.

The central bank’s shortage index in January was a record 28 percent, meaning more than 1 in 4 basic products were unavailable. It’s not rare to see lines outside supermarkets across the country running more than a 1,000-hopeful-shoppers long.

Here in this state-run Mercal supermarket, in the working-class 23 de enero barrio, you can buy rice, chicken, flour and other basics at heavily subsidized prices. But on a recent visit, there was no sugar on the shelves.

Many locals have a theory why this is happening, and it sounds similar to what Maduro’s saying.

“The shortages are a product of the economic war being waged upon us,” said one customer, Gregorio Monasterio. He bought two chickens and some other groceries just after signing up for the loyalty plan.

“The card is a great idea but doesn’t go far enough. There is no need for someone to buy so much and resell it. It’s super-capitalism.”

“The rich buy things here today and resell them for profit tomorrow,” said Romero, sitting outside Mercal with two packed grocery bags, with a giant mural of leftist hero Che Guevara on the wall behind him. “I just buy what I need.”

But critics say it’s more than hoarding that’s behind the shortages. Rather, economists point to the currency controls enacted over a decade ago by Maduro’s predecessor, Hugo Chavez, that make it very hard to obtain US dollars used to import goods. On top of that, critics say, price controls dissuade businesses from producing locally and create an incentive to buy at a lower price and sell at a higher one. Hence Venezuelan newspapers shuttering from a lack of newsprint.

“To cut down the shortages, the government must eliminate or at least reduce the price and currency controls,” said Jose Guerra, the former head of the central bank who now advises opposition politicians on economics. “The card is one way to organize rationing.”

That’s not to say there’s no shopper funny business going on. There’s a thriving market of “bachaqueros,” or smugglers, who buy price-controlled goods in bulk and take them over the border to free-market Colombia to resell at a profit.

More from GlobalPost: In this Colombian border town, looks like Venezuela's president is right about one thing

“It’s criminal. Selling a carton of milk is more profitable than selling cocaine on the border,” President Maduro said.

For protesters, the scheme is one more reason to hit the streets.

“This ration card is another example of control, just as they have in the dictatorship of Cuba,” protest organizer Gaby Arellano said in Caracas’ Plaza Altamira, which has been a focal point for opposition protests for years.

The protests have generally taken place in the wealthier parts of town like Altamira, and not the poorer, socialist strongholds of 23 de enero — named after the January 23, 1958 coup against Venezuelan dictator Marcos Perez Jimenez.

“There’s no fighting here. That’s just for the middle classes, the rich folk,” said Romero outside the supermarket. “We’re civilized.”