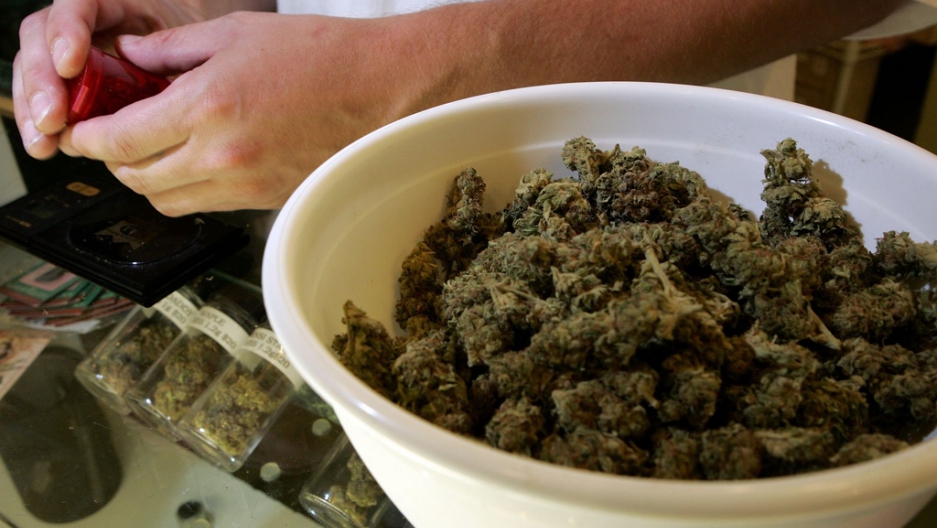 How serious Uruguay is about allowing incarcerated addicts to toke up is hard to gauge.

According to the Huffington Post, the country’s undersecretary for public health told the United Nations earlier this month that Uruguay was “considering” this treatment. A few days later, the nation’s drug czar, Julio Calzada, told The Associated Press a similar story: that Uruguayan prisoners would be allowed access to medicinal cannabis.

But when GlobalPost cornered Diego Canepa, president of the National Drug Council (and boss of both the other sources) at a conference here in Montevideo on April 10, Canepa poured scorn on the idea.

“No, no, no, no, no, there are no plans to do that,” he said when asked to confirm the reports about future prison pot access. “We have to take one step at a time.”

While the government figures out what its policy is on this issue, we thought we’d take a look at the underlying science behind this idea: Can you effectively treat addiction to narcotics like cocaine and methamphetamine with medical marijuana? Or is replacing one drug with another just going to exacerbate a prisoner’s drug habit?

First up, it’s important to note that researchers across the globe are scrambling to fully understand the medicinal qualities of weed.

In the United States, dozens of studies are underway to test the usefulness of cannabinoid chemicals derived from marijuana in treating various ailments. The US National Institute on Drug Abuse, which serves as a gatekeeper to cannabis researchers since it controls access to marijuana and chemicals derived from it, says it funded 28 studies into cannabis as a medicine in January.

What is cannabis typically used to treat?

In US states where it’s legal, marijuana is typically prescribed to treat pain — from temporary back pain to chronic pain caused by debilitating diseases. It’s also increasingly prescribed to help lessen nausea suffered by cancer patients undergoing chemotherapy, and can be prescribed to help with insomnia and to encourage appetite.

So, how about curing addiction?

Nobody seems to be claiming that cannabis is a panacea for treating drug addicts.

Researchers don’t pretend that heroin and crack addicts simply need to smoke a bong or eat a pot cookie to cure their habit.

But there’s a growing body of evidence to support the medicinal marijuana use to help addicts in the recovery process, said Dr. George Comiskey, associate director of the Center For the Study of Addiction and Recovery at Texas Tech University.

Research has shown that cannabis can be very useful as a sort of bridge from drugs like cocaine and meth to sobriety, Comiskey said.

“Many people go through a sustained period of needing pharmacological support in making the move from harder drugs to freedom from addiction,” Comiskey said. “We have found that cannabis is beneficial in so many arenas, so, depending on what someone is going through, it can be used positively.”

Amanda Reiman, a lecturer at the University of California, Berkeley and a policy manager for the pro-legalization organization the Drug Policy Alliance, agreed.

Used responsibly, cannabis can help with all sorts of symptoms connected to withdrawal from synthetic narcotics, from insomnia to loss of appetite, Reiman said. But more than that, cannabis can also help addicts recognize their problem and do something about it, she said.

“We’ve found that cannabis can be a conduit to mindfulness,” Reiman said. “Especially with stimulants, where a lot of the issue is an impulsivity, cannabis seems to slow that process down. [Addicts] can even have three seconds in-between the urge and the action to think about what they’re going to do, and that can really help people get through that craving moment.”

Why not? Says Reiman.

“If cannabis were legal, if it were a legal herb that people used as an alternative therapy, and someone said ‘We think we can help this person with a stimulant addiction by giving them this medicine,’ no-one would say anything,” she said.

Comiskey said that strict control of the amount of cannabis a patient is consuming is very important when considering marijuana as a treatment for addiction.

As such, a controlled environment like a prison is a perfect environment to test the efficacy of using medical marijuana in this way, he said.

“You’re not going to have people just falling into a stupor!” he said.

But we don’t know if it works, right?

“We are still pretty far away from seeing where medical marijuana will benefit addicts,” Jarbe said.

So, is Uruguay serious?

If there’s anywhere on Earth that’s likely to experiment with medicinal marijuana in this way, it is Uruguay.

Last year, it became the first nation to legalize the cultivation, distribution and use of marijuana, and its grand “marijuana experiment,” as President Jose “Pepe” Mujica dubbed it, has become more and more adventurous over the last few months.

From pledging to sell weed at $1 a gram, to stating that pot will be grown on Uruguay’s military bases, the experiment keeps getting more interesting.

Getting prisoners stoned is just the latest twist in the road for this country’s drug policy.