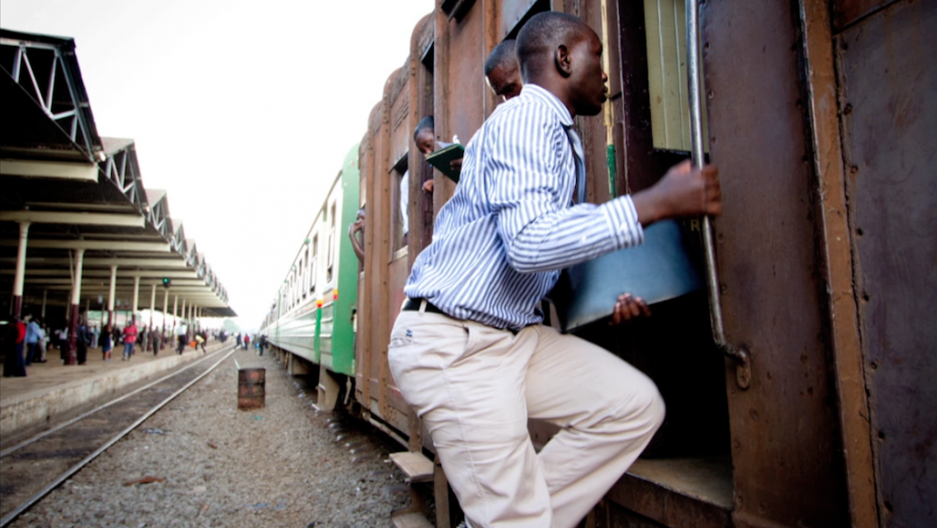 MOMBASA, Kenya – In its heyday, the Nairobi railway employed some 24,000 people. Day and night, they worked to keep freight and passenger trains running between what is now Kenya’s capital city, Nairobi, and the Indian Ocean at the port of Mombasa.

Nicknamed the "Lunatic Line” and the "Lunatic Express" the railway itself has changed little in more than a century since it was built by the British imperial power. Trains still bobble up and down, side to side as they roll along outdated, narrow tracks. Train traffic, derailment and other delays strand cars for hours in the middle of a national park.

But the railway’s workforce has shrunken immensely: Today, the Rift Valley Railways Consortium employs only 3,000 people. They include the usual conductors, engineers, janitors and ticketing booth clerks like Roselyn Mwende.

With 30 years on the job, Mwende, 49, is one of the railway’s most veteran employees.

“When I started working with the railways, the situation was not like today. During that time it was a parastatal. The work force, we were many,” she said. “But since, we’ve gotten new changes. We were privatized. But I think we have not yet caught up with the changes that are there.”

Chief among those changes are modern expectations by passengers for a railway that is anything but modern.

The railway still moves an estimated 8,000 passengers each day, according to station manager Amos Nduati, but its employees must constantly apologize to passengers, especially tourists and others who travel on the ‘upper class’ sleeper cars from Nairobi to Mombasa.

The train is staffed by 13 uniformed cooks, servers and janitors who see to the comfort of the foreign and Kenyan tourists who make the overnight voyage.

One of the servers, Miriam, says she spends most of her life on this train. She reports for work at 6 p.m., just before passengers begin arriving. If she’s lucky, the train will reach the coast by late morning the following day.

But more often than not the train is delayed by heavy freight traffic on the single set of tracks, leaving the passengers and workers stranded for hours in the middle of Tsavo East National Park, a hot, dry region in southeastern Kenya.

“We don’t get overtime, even though we can arrive 10 hours late,” said Miriam, even though Kenyan labor law requires employers to pay one and a half times the standard hourly rate for extra hours worked on weekdays, and twice the rate for weekend shifts.

Still, one of Miriam’s colleagues, Teresiah, said she likes her job as a server and wouldn’t trade it for anything. It pays relatively well, at the equivalent of about $100 per month, and she has a place to sleep and food to eat.

Norman said he earns 7,500 shillings per month, about $88. But he said the captains, engineers and restaurant manager get paid much more.

Even though these men and women are service industry workers, they don’t receive the 10 percent service charge that is automatically added to the bill at many restaurants. According to Kenya’s Ministry of Labour, an employee is entitled to that gratuity so long as he or she does not receive a pension, is not party to an existing collective bargaining agreement that provides for an alternative or waives it, and is not a member of Kenya’s National Social Security Fund—none of which apply to the onboard service workers.

They don’t have a formal union, but some workers say they’re planning to demand they be paid this gratuity as well as overtime. Their direct employer is a Kenyan hotel chain, Pride Inn, which contracts them long-term to the Kenya Railways Corporation.

Both the on-board employees and the station workers at the Nairobi railway are hopeful that change will come soon: In April, the China Road and Bridge Corporation announced plans to replace the historic railway with a new, modern line. Workers will lay a set of standard-width tracks that will allow freight trains to traverse them at much higher speeds.

The new $3.8 billion project is one of the largest infrastructure upgrades in Kenya’s history and will eventually connect all the way to Kampala, Uganda.

“The Chinese are preparing to build the standard gauge railway, and we are hoping we have more customers than were there before,” said Charles Koge, the chief booking clerk at the Nairobi Railway Station. “The railway line will be perfect—not like (what) we have today.”

Workers here say they have no guarantee that their jobs will remain once the new track is completed, which is expected to be in 2017. Precedent is cause for concern: Half the railway’s workforce was laid off after the it was privatized in 2006.

But most seem hopeful the new line will attract more tourists and other passengers, and that the influx of customers will translate into higher wages and benefits for the workers, too.

“I like my job, though the salary is too small, especially for a person like me who is having kids who are learning, studying in the university,” said Koge, who said he earns 38,000 shillings, or $447, per month.

To some of the older workers, more concerning than the salary is the disappearance of the pensions when the Kenya Railways Corporation sold the train line to Rift Valley. Workers are fighting to retain those pensions through an ongoing court case. For now, they continue their daily routine at the railway, hoping for better times to come.