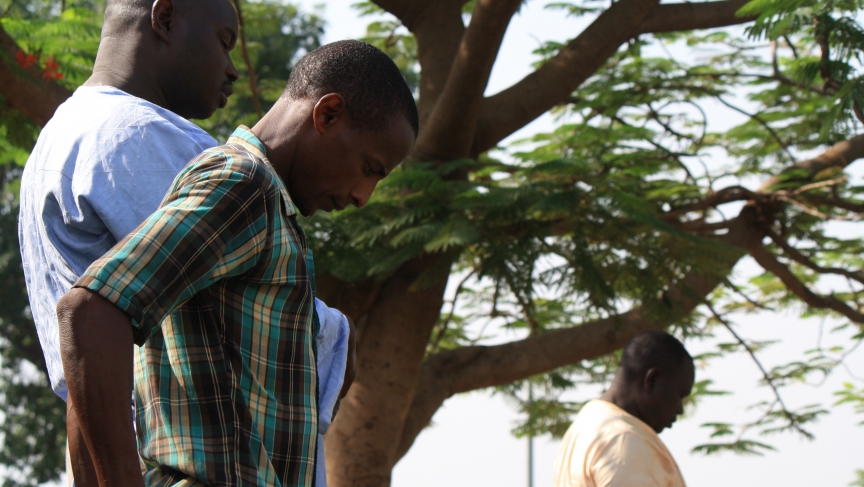 These men wait outside a hospital in Abuja, Nigeria, for the release of the body of a loved who was killed in the bus station bombing.

The brother has wounds on his head, legs and arms, and is missing parts of some of his toes.

In a nearby bed, a young man named Noah Bashir nurses his father, a bus driver. Bashir says out loud what many here only whisper; he's scared that the Islamic militant group, Boko Haram, have expanded their operations so close to home.

Boko Haram has vowed to carve an Islamic state out of a country that is split between Muslims mostly living in the north and Christians mostly in the south.

For the past five years, Boko Haram has been waging a violent insurgency in the northeast. But on Monday, the violence came south to Abuja.

Authorities say more than 70 people were killed when a bomb went off at a crowded bus station.  They blame Boko Haram for what was the most deadly attack in the nation’s capital.

The militant group is also believed to be behind the abduction of more than 100 school girls in Nigeria’s northeast.

"I'm afraid,” says Bashir, “like serious, I'm going out of Abuja and never coming back after this."

But others here say if the capital isn't safe, no other part of the country is either.

As Hamza Ibrahim’s injured brother drifts off to sleep, the young man talks about what happened on Monday. Hamza, who comes from a large family, says five of his brothers were at the bus station that morning when the bomb went off.

They worked there, loading passengers into cars and buses. Hamza says two of them were killed and two more are missing. He says he thinks those brothers are still alive because their cell phones continue to ring.

Hamza says he used to argue with one of the brothers who died, but he was close with 42-year-old Ahmed, who encouraged him to quit work and go to college.

"The guy was very gentle. If he has something, he will give it to anybody,” Hamza says, adding that his brother was going to help him go back to school. Now that Ahmed is dead, though, Hamza says he will probably just continue selling sunglasses on the streets.

On the other side of town, some of Hamza's other brothers wait outside a different hospital. They've found one of the missing brothers inside this hospital, but he died from his injuries. Now they’re waiting for authorities to release the body so they can bury him.

In the meantime, they have received one piece of good news. It turns out that the other missing brother went on vacation without telling anyone, and he's fine.

The Nigerian government says about 75 people were killed in Monday’s bombing, but the Ibrahim brothers say they counted hundreds of bodies in the morgue in this hospital alone. One brother, Mutula, says he's afraid all the time now.

"I fear,” he says, “because anything can happen at any time."

But Mutula says the family won't leave Abuja because with Islamic insurgents, sectarian violence and armed robberies, no part of Nigeria is safe.

The government, he adds, is unable or unwilling to stop the violence.

“Only God will take care of us now,” Mutula says.