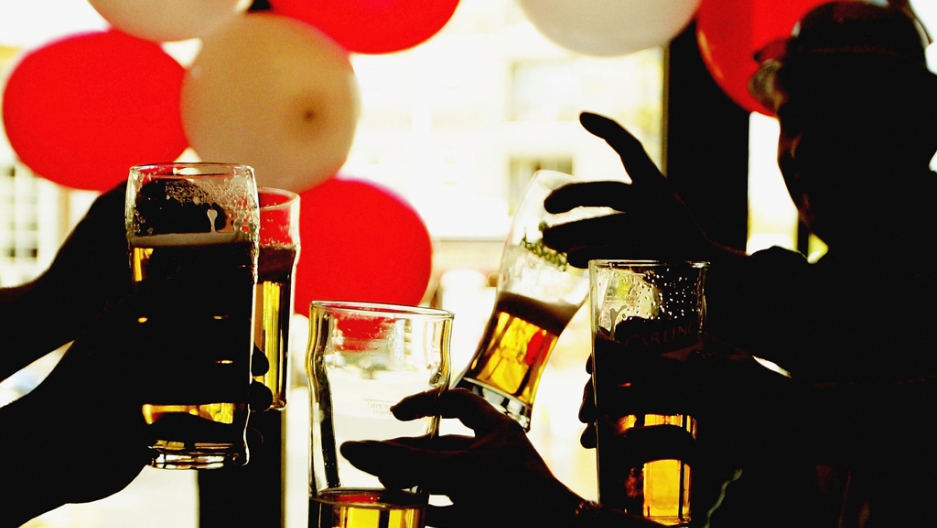 BANGKOK — The Irish and Russians have long suffered under the stereotype that their men drink excessively.

And they do. Health experts insist men should enjoy no more than two drinks per day. The average male Irish drinker has four.

But World Health Organization stats show that these aren’t the only nations worthy of hard-drinking reputations.

In fact, the WHO data are surprising.

It turns out, for example, that Indians binge just as frequently as Vladimir Putin’s compatriots.

Vietnamese women are slightly more apt to get crapulous each week than that country's men.

And in Syria — before the civil war, at least — the tiny minority of ladies who drank put away more booze than women in America.

Here are four charts that reveal surprising booze habits around the globe. (Note that our focus is on surprising findings. To get a more global view, check out the WHO data on bingeing and consumption.)

1. Some Asian nations out-binge Russia. But not Ireland.

The chart below, for select countries, puts Russia’s reputation for soddenness in perspective.

The thirst for beer is seemingly unquenchable in fast-developing parts of Asia, which now brew more beer than Europe or America. This is largely thanks to China’s rising economy. But Vietnam is actually the fastest-growing beer market. In recent years, beer production has shot up by as much as 25 percent.

This growth appears aided by an unusual phenomenon: Women drinkers in Vietnam are slightly more apt to binge than men. This is rare. In practically all countries — no matter the dominant religion, no matter the level of wealth or development — males out drink females.

Note that the WHO data in this chart looks only at “drinkers,” meaning people who’ve had at least one drink in the past 12 months. (If your grandmother has a chardonnay on her birthday but stays alcohol-free the rest of the year, the WHO classifies her as a drinker.)

And what counts as bingeing? About six “standard drinks” — a beer, a glass of wine or a shot of liquor — in one sitting. Each drink contains about 18 milliliters (0.6 fluid ounces) of pure alcohol.

The WHO calls this “heavy episodic drinking.” (American college kids call it “Thursday.”)

2. Women who booze in many Muslim-majority countries drink harder than American women

Obviously, most women in Muslim-majority countries don’t touch alcohol. But those who do apparently don’t hold back.

In Syria, Turkey, Egypt and Malaysia — all Muslim-majority nations — more than 9 in 10 women tell the WHO that they’ve never, ever consumed the stuff.

This apparently leaves lots of booze for the 1 in 10 who do. The female drinkers of Turkey and Egypt, for example, drink more than twice as much as their American sisters. (Again, this chart looks only at the average consumption of “drinkers.”)

Bosnia and Herzegovina — that’s one country, not two — is an outlier on this list. Islam is its largest religion (practiced by about half the population), although it's nearly matched in number by two forms of Christianity (Serbian Orthodoxy and Catholicism), classified as separate faiths.

Russia and the US are included on this chart for comparison’s sake.

We don’t know the faiths of the female drinkers being polled. Muslim-majority Malaysia, for example, is home to large populations of ethnic Chinese and Indians who don’t abide by Islamic taboos against booze. About 10 percent of Egyptians are Christian and thus free to drink. And alcohol is readily available in Turkey, known for moderate Islam.

Apart from Vietnam, one of the only other countries where female drinkers binge worse than men is the United Arab Emirates or UAE — an Islamic kingdom where Muslims caught drinking can be locked up.

And yet — among drinkers — 1 in 3 female drinkers in the UAE report bingeing at least once per week. So do 1 in 4 male drinkers. Much of this drinking takes place in the booming business hub’s hotels and compounds, where foreigners are allowed to booze out of public view.

Those expats must get very thirsty.

3. Some African nations can drink Ireland under the table

That’s right, Ireland. You’ve been out-boozed by the drinkers of Mali, an African Muslim nation that recently had to fight off an Al Qaeda-linked rebellion. Out-boozed almost by a factor of two.

This chart covers both men and women but, again, it looks only at “drinkers.” That can amount to a sliver of the population. For the record: Mali on the whole is far less boozy than America. The vast majority of people in Mali (95 percent), Zimbabwe (75 percent) and Egypt (also 75 percent) report never consuming alcohol in their entire lives.

In countries where the drinking population is so small, figures may be more prone to error. But the WHO suggests that where “abstinence is the norm and/or drinking is forbidden,” people actually tend to underreport their intake.

4. The world’s top binger is a tiny island nation in the Pacific

The first chart in this article shows bingers in select countries, to illustrate that several Asian nations are more consistent in their drunkenness than Russia. This chart shows the overall global binge champs, along with Russia and the US for comparison.

In the Cook Islands — a speck of a nation isolated in the Pacific Ocean — nearly half of all men binge drink, according to the WHO. That’s worse than Ireland. And among Cook Island’s male “drinkers,” 67 percent binge at least once a week.

All that drinking by the sea calls for special advice: Don’t collect shellfish while wasted. “Remember, if you’ve had too much to drink,” a government-issued warning says, “you will not be able to swim as well as usual if you fall in the water or get knocked over by a wave.”

Tunisia — the Sahara desert nation where almost all the population is Muslim — is another surprise. According to WHO data, it’s home to some of the heaviest binge drinking on the planet. Very few people in Tunisia consume alcohol (87 percent are lifetime abstainers) but, among the men who do, the bingeing percentage sits near the top of the charts at 57 percent.

That’s slightly worse than Ireland, the third-heaviest bingeing nation for males according to the WHO’s “heavy episodic drinking” tally.