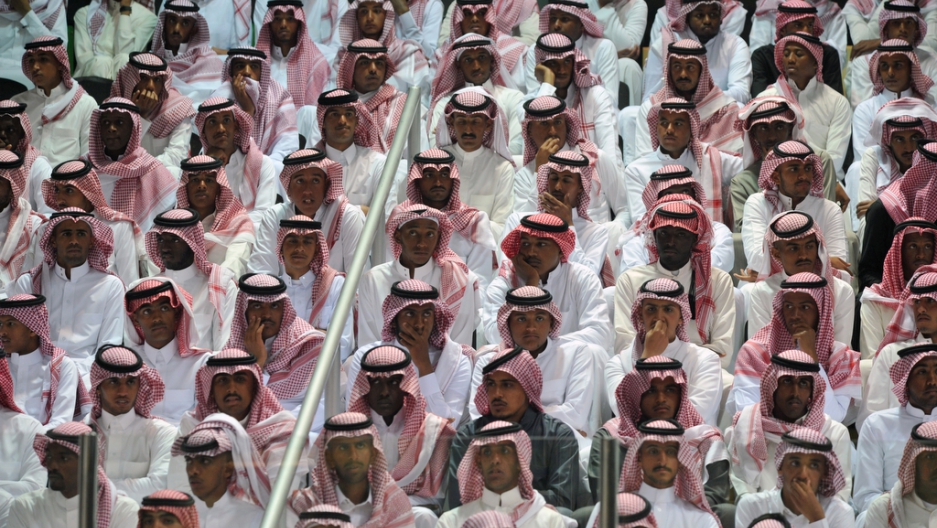 Saudi men attend a traditional dance during Janadriya, a national cultural and heritage festival, near Riyadh on Feb. 18, 2014.
Share

A new dance craze is sweeping, or rather waddling at a rapid pace, across Saudi Arabia.

It’s called the "penguin dance," or "raqsat al-batriq," in Arabic.

Saudis have been posting videos on YouTube and elsewhere of themselves penguin dancing at wedding parties, in their living rooms, and even on the street (when the government-paid religious police aren’t looking).

Women are in on it too. Here, four women enjoy a little penguin shuffle beside a swimming pool:

One of the most viral videos is this one of a man dancing with his daughter in their living room:

Saudi Arabia is the world’s largest per capita user of YouTube, with residents spending more hours watching videos online than in any other country. It's also one of the biggest users of Twitter.

There’s a good reason for that.

The traditional media, tightly controlled by the government and heavy with religious programming, is not giving what their mostly younger audience wants. More than half of Saudi Arabia’s 28.3 million people are below the age of 35 and are increasingly turning to the internet for entertainment.

This satire video, "No Woman, No Drive," was posted to YouTube by musician Alaa Wardi and comedians Hisham Fageeh and Fahad Albutairi. It's had more than 11.6 million hits.

So it's no surprise so many penguin dance videos have gone viral.

Not everyone is a fan, though. Guests at a wedding in the eastern town of Dammam earlier this year fought after the bride's relatives objected to the groom’s family and friends penguin dancing.

Some in Saudi Arabia have called the moves “untraditional” and “unmasculine.”

But most are more light-hearted about the whole thing.

"Personally, I think Saudis like to have fun and enjoy themselves as much, if not more, than the next person," Leila Molaei, a London-based expert in Gulf and other Middle Eastern dance, told the Wall Street Journal.

"The penguin craze is a manifestation of that. It's a bit of fun."

More from GlobalPost: Saudi women driven to drive on day of protest (VIDEO)