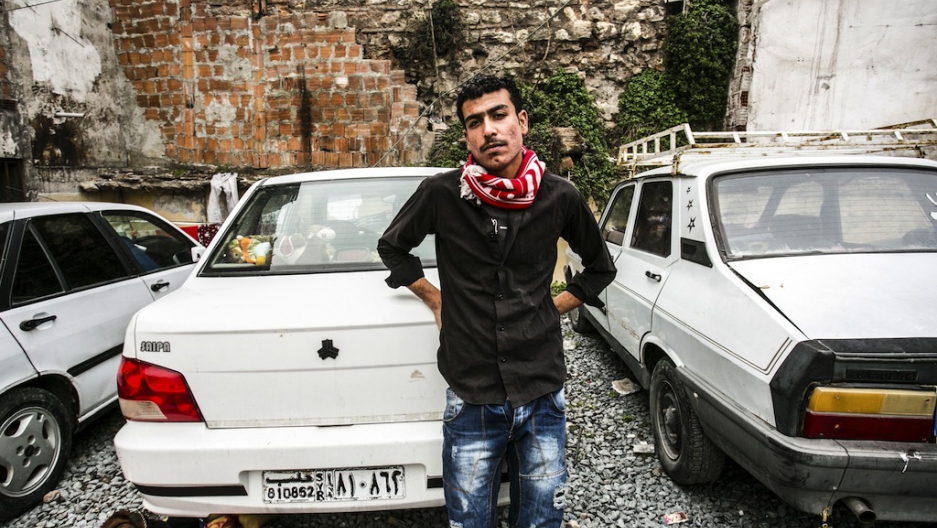 A Syrian refugee in the Kucukpazar area of Istanbul, on March 4, 2014. Syrian government forces are waging a campaign of siege warfare and starvation against civilians as part of its military strategy, a UN-mandated probe said on March 5. Syria's war has since March 2011 killed more than 140,000 people and forced millions more to flee.
Credit: Gurcan Ozturk
Share

ANTAKYA, Turkey — Entering her final year at Aleppo University, Hiba Obied was full of confidence. Like university students everywhere, she dreamed of a bright future full of opportunities, hard work and success.

An important round of exams was set to begin last January, and Obied said the university was brimming with nervous students.

“We were in the middle of the exam,” she explained in an interview at a home in Antakya where the 24-year-old now lives as a refugee. “Suddenly the explosion happened. All the glass broke. We left our papers behind and ran downstairs. People were running and screaming in the street. We didn’t yet know what had happened exactly. Then the second explosion hit.”

Across Syria, over the past three years of relentless conflict, students have faced increasing risk from a wide range of peril including bombing, gunfire, arrest, torture, execution, military conscription and a growing national economic crisis that has forced many to quit and find work abroad to help support their families. An estimated 50 to 75 percent of Syrian university students have been forced to leave their studies.

The double bombing at Aleppo University claimed over 80 lives and 150 more were injured. Obied described the scene of chaos and tragedy there. Some of her friends rushed to help the injured and remove broken bodies from the street. Others were in a state of panic searching for any vehicle to take them from the area.

By April 2013, the UN estimated 2,445 Syrian schools had been damaged or destroyed. A further 1,889 were being used to shelter some of Syria’s 7 million internally displaced. A 2014 report by the Global Coalition to Protect Education from Attack said more than 1,000 schools are being used for military purposes by either government or opposition forces, in some cases as detention and torture centers.

The report said by September 2013, two million children age 6 to 15 had dropped out of school because of conflict and displacement. Higher education facilities – which were frequently the scene of anti-government protests during the early stages of the Syrian uprising – were even harder hit with students arrested, detained, tortured and killed for their participation in protests. Security units monitor all student activities at every university, and government forces have killed and arrested hundreds in campus raids.

“The destruction of Syria’s higher education system is devastating to the future of the country,” said Daniela Kaisth, vice president of the Institute of International Education (IIE). “You have professors being killed, kidnapped, imprisoned or forced to flee so that human capital is very vulnerable; these are the leaders and the trainers of the society. Then you have the university students – who will be needed in the future to rebuild and run that country – that are not being educated at all. It’s a very dangerous situation and one that is detrimental to the future of Syria.”

Kaisth compared the situation to that of Cambodia and Burma, which once had sophisticated higher education systems but have now for decades been among the poorest and most underdeveloped countries in the region.

“In these cases, as with Syria, we saw a transition of society where the intelligentsia were targeted with violence or repression. All indicators for the country go down – health indicators – education indicators – and the country takes a turn for the worst in terms of international standing and UNDP rating,” she said.

For those who have managed to continue their studies in Syria, the level of education they receive is poor to say the least and the daily stress of living in a country under conflict has taken a heavy toll.

One 23-year-old English major who asked not to be named should have graduated two years ago. She managed to sit an exam last month, but had to take extreme risks and cross dangerous front lines to get there. Attending classes has been out of the question. She studies at home alone without help or instruction.

“Most of the young people can not go at all,” she said of her classmates. “I see only girls. If the boys came they could be arrested.”

One archeology student took that risk last month when he attempted to travel from Lebanon to Aleppo University to enroll for the four remaining subjects he needs to graduate.

“I booked the ticket from Beirut right through to Aleppo,” said 28-year-old Jamal, whose real name is being withheld to protect him.

“On route the bus was stopped at an ISIS [Islamic State of Iraq and al-Sham, an Islamic militant group] checkpoint. They searched the bus and questioned us for two hours before they decided to take us all hostage.”

Jamal said all passengers were tied and blindfolded. He said most of their captors were native English speakers. They interrogated the passengers about Islam and how often they prayed. For three days they were held on the bus and given only water and dates.

When asked if they were beaten he answered, “Of course they hit us. This is compulsory. If they had time for us I’m sure we would not be here now. We were only released because clashes broke out with the Free Syrian Army [a key opposition group] and they had to leave us to join the frontline.”

The men were released on foot, still blindfolded. When they reached a bus station, Jamal immediately boarded a bus straight back the way he had come, but on arrival at Damascus bus station he was arrested again – this time by regime police.

Back in Lebanon, still recovering from his bruises, Jamal described the three days he spent under government interrogation where he meticulously counted his beatings: 14 punches, 600 kicks and around 700 slaps on the face. But all his interrogates uncovered was that Jamal had remained neutral throughout the revolution and he had already served over two years of military service before enrolling at university.

After two arrests and six nights of imprisonment and beatings, Jamal returned to Lebanon empty-handed and went back to work on the building site where he earns less than minimum wage.

“There is a political concept in Arabic, when the elephant walks it destroys the grass,” he said. “In a political war, the little people get crushed. The only choice we have is to stand in the face of death or run away with our lives.“

That political war has spilled over into higher education and frequently dictates who is permitted to attend university.

Sam Razzouq, a fifth-year medical student, was expelled from the University of Kalamoon soon after his arrest by government forces on March 14, 2011, the day before the official start of the uprising on March 15.

Razzouq had been active in lobbying for political change. As he stepped off a bus on a visit to Aleppo, plain-clothed officers seized him. Within minutes he described being bundled into a car, his arms bound behind his back and a black bag placed over his head.

“They burned my arms and broke my teeth, but the worst part was the psychological torture,” said Razzouq, who was held for 20 days without charge. “They locked me in a one-by-two-meter room with nothing. There was no light. You don’t know night from day. You have no concept of time. You don’t know where you are or what is happening.”

After his release and a period of psychological recovery, Razzouq returned to his studies with plans to stay away from protests and politics and continue through graduation and become a medical researcher. But protests soon erupted again, and despite his lack of involvement, he was still expelled based on his past activities and warned to never set foot on campus again.

Some of his fellow classmates, he said, were forced into military service. Another was arrested and never heard from again. As insecurity increased, others were kidnapped for ransom.

“[Kalamoon] is a private university so people know the students are from rich families and they can ask for a high ransom, particularly for girls. Some families have paid $20,000 or sometimes $100,000 to have them released quickly. One time they kidnapped a whole busload of students en route to the university,” Razzouq said, adding that all were released after the families paid.

By the time the university closed due to heavy fighting last year, most of the students, including Razzouq, had already fled the country. But continuing study outside of Syria comes with a whole new set of challenges including open discrimination, financial limitations, administrative hassles and language barriers.

“You feel like you are in a huge black hole moving in nothing, attaining nothing, walking on nothing — no goals, no hopes, never settling. At any moment the situation can change again,” Razzouq said from his current home in Antakya. “When we walk in the street some people look at us like we are terrorists, some look at us like we are garbage, others like we’re parasites.”

For the majority of Syrian university students like Razzouq, years of hard work and achievement have ended in nothing but heartache and hopelessness.

“Before, I felt like the world was mine. I was studying in the medical field, working in literature, politics, and cinema; I felt like I could do anything,” he said.

“When you work for something for five years and then it’s gone the anger controls you… It seems our destiny is to be nothing but dust. We blow from here to there with no options. We go with the wind. This is not depression – this is reality. It is not my imagination. We are nothing.”