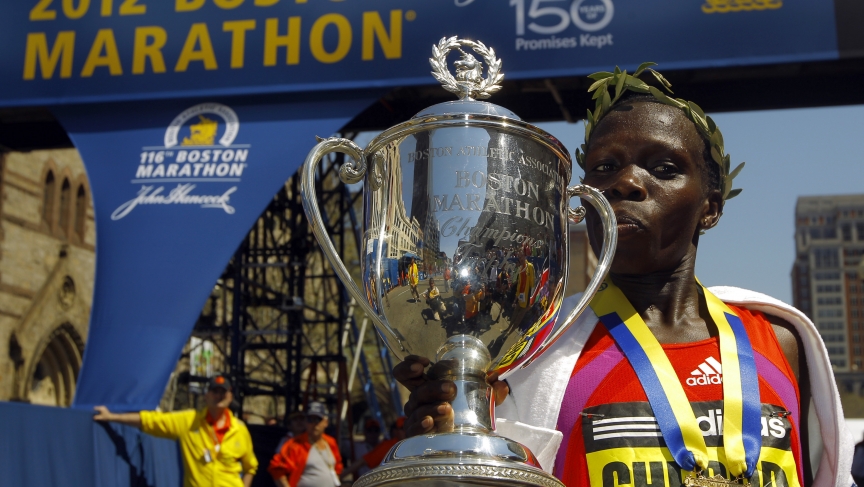 Sharon Cherop of Kenya poses for photographers after winning the women's division of the 116th Boston Marathon April 16, 2012. She's returning this year with the hope of another victory.

It's impossible to think about the 2013 Boston Marathon without thinking about the bombing that disrupted it.

Just read a transcript of the NBC Sports play-by-play, hours before the explosion: And the men's race is blowing up! Yikes.

It’s a regrettable phrase in retrospect, but no one had any idea what was about to happen. Everyone's focus was on the race. And what a race it was.

Fans watched as Rita Jeptoo of Kenya won the women's event in commanding fashion. On the men's side, Ethiopia's Lesisa Desisa sprinted down Boylston Street to win by a couple feet. After the race, Dasisa told reporters everything was good. And she couldn't have been more right at that very moment. "People are good. Weather is good. Everything is good."

But as we all know, that was short-lived. It's been a tumultuous time for Boston, ever since. But with the race just days away, things are turning around. Runners have already started to arrive, from places near and far.

Of course, there are many here from Kenya already. Kenyan runners hold both the male and female race records. Geoffrey Mutai in 2011 ran the Boston Marathon in 2:03:02, while Margaret Okayo in 2002 ran the course in 2:20:43. In Kenya's Rift Valley, which produces some of the top runners in the world, a Boston win is front-page news.

Nephat Maritim, a middle distance runner from the Rift Valley, says there's a lot of prestige attached to success in running. Nephat’s a junior at Harvard. The Boston Marathon is his Super Bowl. He adjusts his entire spring course load around it.

"I knew right from long ago we're going to have a Boston Marathon on a Monday," he says. "So I made sure I have no class on Monday."

Maritim won't be running in the race, though, he'll watch on TV so not to miss a moment. The top runners are his heroes.

"They are the only professional sportsmen in Kenya who make some serious money," he says. "People know them. It's the same way you would talk about Brady or something. He plays for the Patriots?"

One guy with the potential to become a Brady-like figure is Keyan runner Daniel Salel. He was out training on the Minute Man trail in Concord, Mass, just west of Boston, recently. He looks like stick and bones on video. But up close, it's different. He's all sinewy muscle. Daniel runs a mile in 3 minutes, 54 seconds. That's faster than Roger Bannister.

"It takes commitment to be a good athlete," he says.

That's the key: commitment. Daniel lives a monastic existence. He trains. He eats. He rests. He trains. He races. He rests. He runs. That's his life. He's racing in the Boston Athletic Association's distance medley. It's a series of 5K, 10K, and half-marathon events. He says he's still a couple years away from competing at the marathon distance. But that's the purpose for all his training.

"I wish that maybe one day, I'll become a winner," he says.

Sharon Cherop also thinks commitment is the key to winning a Boston Marathon. She should know. She won in 2012, with a time of 2:31:49.

"So many people were screaming, cheering, it really was a great day for me," she says of her victory in 2012.

Cherop didn't run Boston last year. And when I asked her if she had any concerns about running this time around, she said no.

"I believe that what happened last year will not happen again," she says.

What she really wanted to discuss was the race. Elite runners like Cherop consider the Boston Marathon one of the major marathons, alongside London and Berlin. The $500,000 dollar purse sure helps, but so does the course. They call it the toughest. Runners like to say there are marathons, and then there's Boston.

The more you talk with Cherop, Salel and Maritim, the less you think about the bombing, and the more excitement you feel for Marathon Monday. You start to see the race through the eyes of runners. And this year, when elite runners, like Cherop, fly down Boylston Street toward the finish line, their stamina and speed will remind you the Boston Marathon is, at its core, one incredible race.