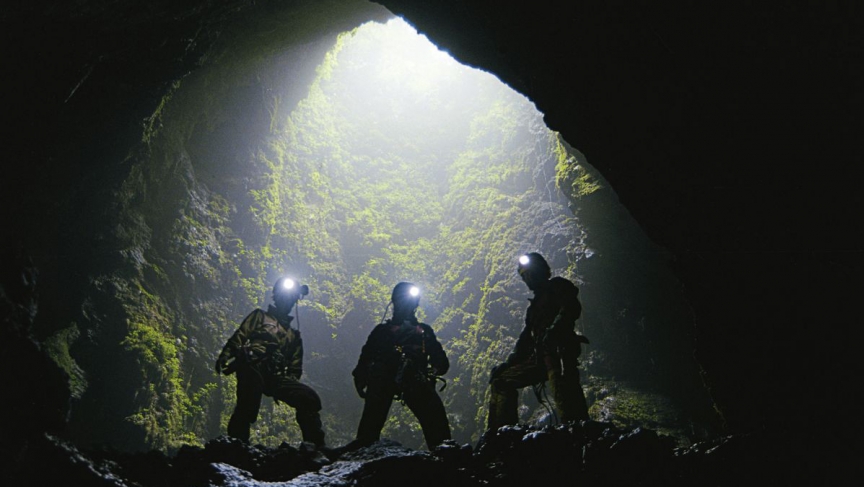 If you're claustrophobic in any way, stop reading this story. Please avoid listening to the audio of the story. You won't like it. So avoid it. There's plenty of other good stuff on our website to enjoy.

It's a good one. And it doesn't talk about descending down into the black abyss of the Cheve, one the deepest cave systems in the world.

So that's your warning.

With that said, Burkhard Bilger's latest story in the New Yorker is an epic, even better if its read outdoors. Just look at the jaw-dropper of an opening paragraph:

On his thirteenth day underground, when he’d come to the edge of the known world and was preparing to pass beyond it, Marcin Gala placed a call to the surface. He’d travelled more than three miles through the earth by then, over stalagmites and boulder fields, cave-ins and vaulting galleries. He’d spidered down waterfalls, inched along crumbling ledges, and bellied through tunnels so tight that his back touched the roof with every breath. Now he stood at the shore of a small, dark pool under a dome of sulfurous flowstone. He felt the weight of the mountain above him--a mile of solid rock--and wondered if he’d ever find his way back again. It was his last chance to hear his wife and daughter’s voices before the cave swallowed him up.

Few will ever be able to write as good as Burkhard Bilger. I first fell in love with his writing when my dad gave me a copy of his book, "Noodling for Flatheads." I've been a fanboy of his work ever since. I'm just glad we did the interview remotely. If I'd been in the same room with him, I would've had him sign my book. My T-shirt. My laptop. I'd embarrass myself.

This story on the monster cave outside Oaxaca, Mexico, is among his best. He shared with us more about it during the interview, starting with the entrance.

"It's spectacular," he says. "You go in this huge, gaping hole in the cliff-side and there are rocks and monoliths inside and the ancient Cuicatec Indians used to hold ritual sacrifices there, and there are a number of bones that were found of people who were sacrificed. So it has a real creepy and impressive aura."

Then you head down. Bilger says the caves work like a staircase. But the "staircases" in caving are different from the ones you're used to. In the Cheve cave system, it's a combination of rappelling, crawling on your belly for hundreds of yards, and even traveling underwater with the help of scuba gear, over and over and over. So yeah, it's a different sort of staircase. Bilger says many times, you have to squeeze your body through narrow rock passages.

Makes you wonder, why the heck anyone would want to do this?

Because it's there, is one reason. Another reason, Bilger says, is the sense of exploration. But the other explanation is that cavers love caving.

"They kind of like being underground in an odd way," he says. "These are people who, it's not that they just aren't claustrophobic, it's that they actually love the feeling of being surrounded by rock. It's that womb-like feeling of having close contact with the earth."

To be sure, It's not without risk.

Bilger says it's on the danger level of extreme sports, like BASE jumping. There are a variety of ways to die. You can get hypoxia from a lack of oxygen, or narcosis. You can get trapped in a tunnel, then a rainstorm hits  and you drown. You can also die from the climbing aspects of it, and fall to your death "So it really is a thousand ways to die," he says.

That's why deep cave exploring requires a team. Bilger says you approach the cave like climbers approach at summit of Mt. Everest. There's a base camp and several more campsites at different depths inside the cave. Other cavers shuttle supplies to keep the lead cavers fed. Some of the cavers spend weeks inside the cave, searching for the bottom.

But it's different that Everest. There's no reward of standing atop a mountain. There's just more cave.

And that's what Bilger has trouble grasping. Why do it? Sure, you can try and beat a record depth, but doing so is rare. His best guess is that cavers are different.

"They don't have such a heroic self image," he says.