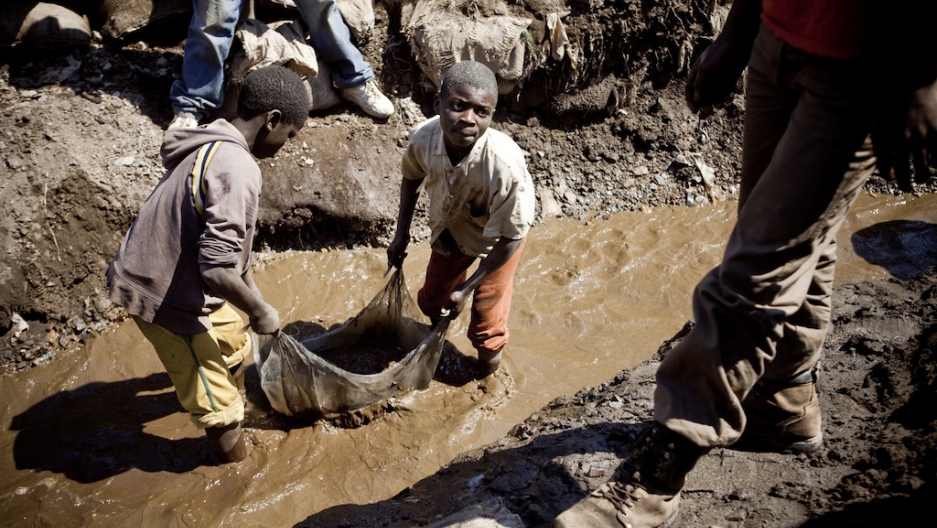 Children wash copper on July 9, 2010 at an open-air mine in Kamatanda in the rich mining province of Katanga, southeastern Democratic Republic of Congo (DRC). Some 400 children from Kamatanda and surrounding villages, who have dropped out of school, help miners transport, sort or wash the mineral.
Credit: GWENN DUBOURTHOUMIEU
Share

CAMBRIDGE, Mass. — While many victims of human rights violations were waiting for the implementation of the conflict minerals provision, set to take place in six weeks, the United States Appeals Court of the District of Columbia overturned the measure, on the basis that it violates the First Amendment rights of those corporations that benefit directly or indirectly from human rights abuses in Democratic Republic of the Congo’s mines.

In response to the Congo civil war, where over five million people were killed, the US Congress passed the Dodd-Frank Wall Street Reform and Consumer Protection Act in 2010.

Within this legislation was Section 1502, also known as the conflict minerals provision, requiring American companies to disclose to the Securities and Exchange Commission by May 31, 2014, whether their products contain conflict-minerals or ‘human rights violation’ minerals — such as minerals attained through child labor practices. Yet, in support of corporate arguments, the appeals court determined on April 14 that the disclosure rules are unconstitutional, as companies should not be forced to reveal such practices because it forces speech that stigmatizes the company’s own products.

This ruling confirms that the freedom of speech is a paramount right and value, having priority over the right not to be subjected to labor exploitation or inhumane treatment.

In response, let me also exercise my First Amendment right to speak up on behalf of vulnerable children who are exploited daily in the artisanal and small-scale mines in the Congo.

Thousands of children are subjected to mining labor in these mines. Most of them work more than 10 hours per day to earn between seventy-five cents and three dollars, daily. Some of them are as young as five years old.

Those children work under dangerous conditions in the mines, and are exposed to radioactive minerals, injuries and fatal accidents.

The minerals extracted by child-miners include coltan, tungsten, tin, cobalt as well as some others. The minerals are exported from the Congo and used by manufacturers to produce computers, jet engines, or rechargeable batteries for hybrid electric vehicles, laptops and cell phones.

These children are vulnerable to any kind of exploitation due to their young age, their conditions of poverty, and the lack of alternatives and opportunity.

The problem of child-mining labor is no longer a local issue that concerns the Congo alone. It is a global and extra-territorial problem because it touches the lives of many American people through the electronic devices that they use daily.

Therefore, child-miners in the Congo need broad protection, including safeguards supported by the American judicial and administrative institutions.

The appeals court’s decision overturning the conflict minerals disclosure rules, based on free speech, can be understood by child-victims in the Congo as a license given to corporations and other intermediaries to continue to violate their basic rights with impunity.

In its April 14 ruling, the appeals court sent the case back to the lower court for further proceedings.

In the meantime, your action, as electronics consumers, is needed. Please contact your manufacturers and ask them to play by the rules in tracing the supply chains of minerals used in their products.

Roger-Claude Liwanga is a human rights lawyer from the Congo and Fellow on Human Trafficking and Forced Labor Program with Harvard University’s FXB Center for Health and Human Rights. He recently directed and produced a short documentary, “Children of the Mines.” He writes in his personal capacity.