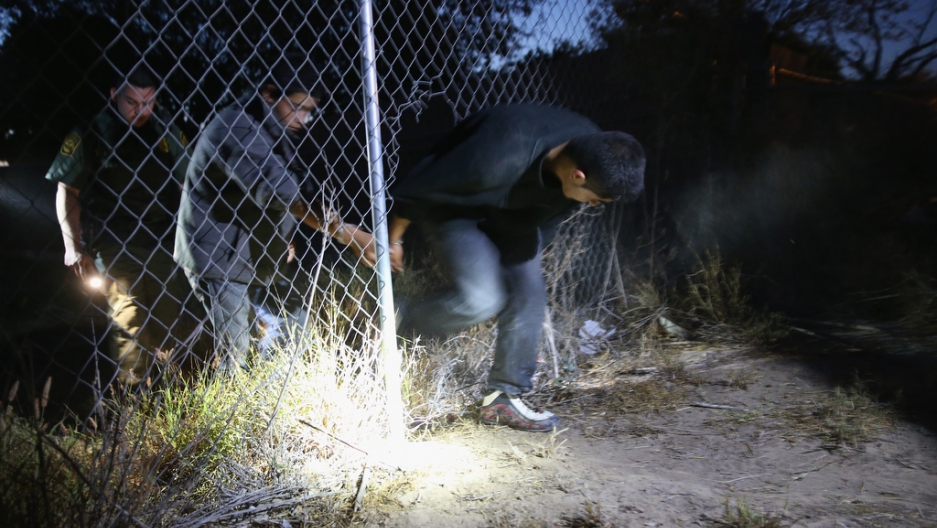 A US Border Patrol agent detains undocumented immigrants who had crossed from Mexico into the United States on April 11, 2013, in Mission, Texas.
Credit: John Moore
Share

While the number of deportations has barely changed since 2008, there's been a big spike in the number of undocumented immigrants sent home for criminal convictions.

Are immigrants committing more crime? The answer is no, the US government is just convicting more immigrants for minor violations.

The Transactional Records Access Clearinghouse, or TRAC, recently pulished a series of studies on the changing makeup of deportees over the past six years. The research is based on data obtained from the US Immigration and Customs Enforcement agency.

Here is what it found:

The number of people deported in 2013 fell 10 percent from 2012, when deportations hit a record 409,849 — about 1,122 people every day. Before that the number has remained essentially static since 2008. What has increased dramatically in the past six years is the number of those deportees described as "convicted criminals," TRAC said.

That Mexicans make up the majority of deportees is not surprising. They account for most of the 11.5 million illegal immigrants in the United States.

Most of the undocumented immigrants removed from the United States in 2013 were Mexican men in their 20s and 30s. The ages of deportees ranged from infants to people in their 90s.

The study, which covered the last year of the Bush administration and the first five years of the Obama presidency, found that the circumstances of deportations had changed significantly over that time.

The number of undocumented immigrants deported last year who had been charged with criminal offenses was a whopping 87 percent higher than in 2008: 216,810 versus 115,727.

6. But almost 50 percent of those were charged with only a minor violation

The result was driven not by an uptick in crime, but by a huge increase in the deportations of people whose “most serious conviction was an immigration or traffic violation" — up 167 percent and 191 percent respectively.

That means someone who overstayed their visa or received a parking ticket was given a criminal conviction due to U.S. Immigration and Customs Enforcement's "exceedingly broad definition of criminal behavior."

"If the same definitions were applied to every citizen — rather than just to noncitizens — available evidence suggests that the majority of US citizens would be considered convicted criminals," TRAC said.

Other offenses — such as murder, burglary, embezzlement and motor theft — saw much smaller increases or even declines over the six-year period.

Under US law, an undocumented immigrant doesn’t have to be convicted of a crime to be deported. The simple fact they are in the country illegally is enough to get them booted out.

But given the huge number of undocumented immigrants living in the United States, immigration authorities have focused its efforts on serious criminal offenders.

The launch of Secure Communities in 2008, a massive government surveillance program that requires local enforcement officials to send to Immigration authorities the fingerprints of every person they arrest, led to many more deportations. According to its data, the department of Immigration and Customs Enforcement has already reviewed 32 million fingerprint records through this program.

TRAC points out that the the department of Immigration and Customs Enforcement's plan to go after convicted criminals who "posed a serious threat to public safety or endangered national security" — and not minor offenses — hasn't worked.

"The number of individuals deported who have been convicted of any criminal offense apart from an immigration or traffic violation has actually declined," it said.