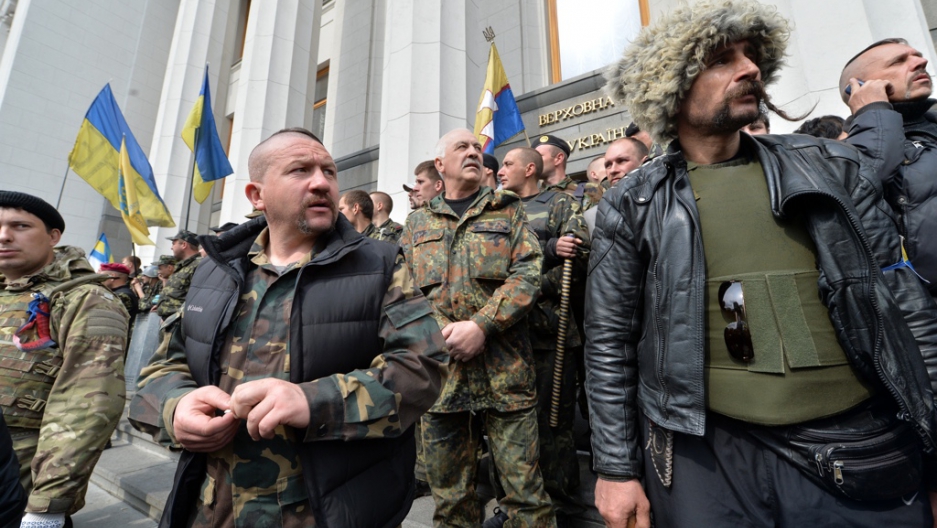 A tentative plan for Ukraine emerged from Thursday’s four-way talks in Geneva, where representatives from Russia, Ukraine, the United States and the European Union met to try to find a way out of the deepening crisis.

According to a joint statement issued by the participants, “All sides must refrain from any violence, intimidation or provocative actions. The participants strongly condemned and rejected all expressions of extremism, racism and religious intolerance, including anti-Semitism."

The statement continued: "All illegal armed groups must be disarmed; all illegally seized buildings must be returned to legitimate owners; all illegally occupied streets, squares and other public places in Ukrainian cities and towns must be vacated.”

More from GlobalPost: Live blog updates on the Ukraine crisis

The agreement has defused, at least for now, a crisis that seemed to be spiraling out of control just 24 hours earlier.

On Wednesday night into Thursday, three pro-Russian demonstrators were killed in the seaside town of Mariupol when an angry crowd tried to storm a Ukrainian military base there.

This followed a fairly chaotic day in which residents of the eastern Ukraine towns of Kramatorsk, Slovyansk and Donetsk handily disarmed Ukrainian forces sent to quell their rebellion.

In Geneva, US Secretary of State John Kerry made clear that the agreement was just a first step toward regulating the situation.

“If we do not see progress, we will have no choice but to impose greater costs on Russia,” Kerry said during a news conference following the talks.

Additional provisions of the agreement include a monitoring mission by the Organization for Security and Cooperation in Europe, a revision of Ukraine’s Constitution, and greater autonomy for Ukraine’s regions.

The agreement was a welcome surprise. Few had anticipated a breakthrough in the intractable conflict, where neither Russia nor Ukraine seemed prepared to back down.

“My expectations [for Geneva] are fairly modest,” Steven Pifer, a senior fellow at the Brookings Institution and a former US ambassador to Kyiv, said in a phone interview with GlobalPost Thursday morning, before the agreement was announced. “It will depend on whether [Russia’s foreign minister] Mr. Lavrov brings anything new to the table, and whether Moscow is prepared to defuse the crisis. So far they have been pushing things to the edge.”

For the past two months, Russia and the West have been at loggerheads over Ukraine. In March, Moscow annexed Crimea, after what Washington and Europe deemed a clearly illegal referendum. Many feared that eastern Ukraine was next on the Kremlin’s agenda.

The European Union talked fitfully of increased economic sanctions against Russia while NATO promised to ramp up its military presence in the region.

The White House warned sternly of “consequences” if Moscow did not stop its support for “non-state militias” in eastern Ukraine, but the rhetoric seemed to be having little effect on Russia’s behavior.

Russian President Vladimir Putin dismissed as “nonsense” reports that the Kremlin has operatives in Ukraine, but his denials rang hollow, given that he said the same thing last month about a rumored Russian presence in Crimea.

“During his call-in show yesterday Putin admitted that he had soldiers in Crimea,” Pifer said of Wednesday’s program. “He even decorated some for their performance in the conflict.”

There is still potential for further clashes if the Geneva agreement is not implemented immediately, but the danger of a wider conflict appears to have abated.

“The US and NATO have been clear — some would say too clear — that they are not willing to go to war over Ukraine,” Pifer said. “Russia understands this. And Ukraine understands it. So we are not running the risk that they will miscalculate the degree of Western support.”

The West has been firm in its support for Ukraine, he insisted. An increased NATO presence in the Baltics will serve to reassure the now very nervous states of Estonia, Latvia, and Lithuania, while demonstrating to Russia that there’s a clear difference between Ukraine on the one hand and NATO allies on the other.

Washington has also shown its commitment with visits from high-level officials. Vice President Joe Biden is scheduled to go to Kyiv in the near future, as is Kerry.

CIA Director John Brennan has been there, in a supposedly secret visit last weekend.

“I’m not certain what that was about,” Pifer said.

Others have not been so reticent. Many have speculated Brennan was in Kyiv to shore up the government’s resolve to put down the rebellion in eastern Ukraine by force.

Russian Prime Minister Dmitry Medvedev said as much in an angry post on his Facebook page. Ukraine, he said, must decide its own future, “Without impostors, nationalists, or bandits. Without tanks or armored vehicles. And without secret visits by the CIA director.”

Kyiv’s decision to use force against the demonstrators was a gamble: Having come to power through mass demonstrations coupled with paramilitary tactics like occupying government buildings and throwing Molotov cocktails, the government now has to deal with similar tactics being used against it in eastern Ukraine.

It could also have precipitated intervention from the 40,000 or so Russian troops massed along its border, as Putin warned on Wednesday.

The Geneva agreement will put off for the present some very ticklish decisions that Washington and its allies will have to face if Russia and Ukraine are unable to find a way to live together.

So far there has been limited direct assistance to Ukraine’s military, other than 300,000 meals ready-to-eat that were sent in March.

But the Kyiv government will require a large economic bailout in order to survive, and the negotiators in Geneva reaffirmed their commitment.

“The participants underlined the importance of economic and financial stability in Ukraine and would be ready to discuss additional support as the above steps are implemented,” read the statement.

If the agreement holds, it could be a sign that threats of increased sanctions against Russia have had some effect.

Russia’s economy was already showing some signs of strain, analysts say, in part because investors have been scared off by the prospect of an economic boycott of Russia.

“Neither Washington nor Brussels have declared a full-scale economic war,” Pifer said. “But the markets aren’t waiting.”

This could explain Moscow’s new pliability.

“Putin has made a bargain with his people,” he said. “They do not have a lot of political room to maneuver, but he has given them economic stability. If the sanctions start to tip the balance and he sees his approval ratings slipping, he may get nervous.”

The notoriously stoic Russian population is willing to endure a lot more than their Ukrainian counterparts, but even they might have a limit. Putin is allergic to the kind of unrest that toppled the regime in Kyiv last February.

“Putin is worried about Maidan.”