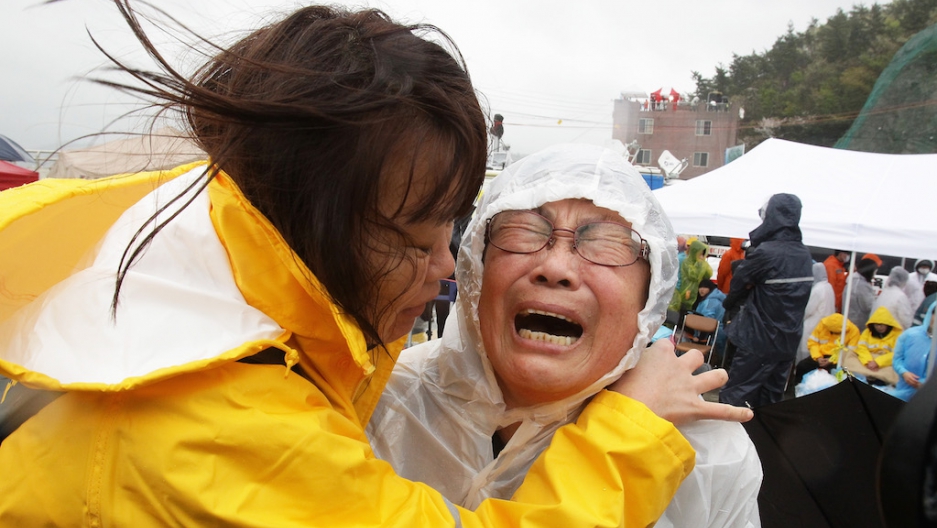 A relative weeps as she waits for missing passengers of the sunken Sewol ferry, on April 17, 2014 in Jindo-gun, South Korea.
Credit: Chung Sung-Jun
Share

SEOUL, South Korea ― Wednesday's ferry sinking off Korea’s west coast is being called one of the country’s worst peacetime disasters in modern times. Although 14 are confirmed dead, close to 300 are still missing in the frigid waters. Hopes are dwindling of finding more survivors.

South Korean authorities haven't yet determined the cause, but hints of human error and incompetence are surfacing. Survivors have said that they were repeatedly ordered through an intercom system to remain where they were, even as the 6,825-ton Sewol listed perilously and water filled the cabins. The ship, which authorities determined made a sharp right before turning on its side, could have struck a rock or been thrown off balance by many tons of poorly secured cargo, maritime experts speculate. Passengers report hearing a loud boom just before the ship began tilting.

The Korean coast guard is questioning the captain and other crew members.

Most of the passengers were high school students from Ansan, a city just south of Seoul, on a field trip to the popular tourist destination of Jeju Island off the southern coast. For them, the long-anticipated trip was a final break before cramming for exams. Their distraught loved ones spent the night in a gymnasium, reportedly under funereal silence.

The tragedy has cast a dark pall over this entire nation, which is at once grieving and gripped by anxiety over the fate of the missing passengers.

Understandably, accusations are being hurled at the ship’s officers; its captain was allegedly one of the first to abandon the doomed vessel. Likewise, the government is taking a bruising for a rescue effort widely seen as lackluster. Officials have been accused of initially underestimating the gravity of the disaster. In the gym, angry parents shouted at the president and threw a water bottle at the prime minister.

But unlike in other nations beset by tragedy, for many South Koreans the sunk ship is more than merely a disaster triggered by incompetence or gross negligence. For them, it reflects on what they claim are flaws in the national character ―shortcomings that Koreans say they have long struggled with but have yet to overcome.

"Even if the sinking was an accident caused by careless staff, Koreans will say that it's a shame for Korea," said Minjeong Gu, 33, an editor in Paju, northwest of Seoul. "'Shame' is one of the most commonly heard words in Korea," she said.

Indeed, shame ― along with sadness and mourning ― summed up the emotional reactions Thursday in Seoul. "I am ashamed to be Korean!" exclaimed an elderly convenience store owner in the capital, who would only give his family name, Park, before launching into a diatribe of expletives.

Editorial writers echoed this theme. The Kookmin Ilbo wrote that the disaster response was, "A typical underdeveloped-country style action … confusion, haste and a delayed rescue." The Chosun Ilbo wrote, “Above all, the people must have felt deeply that South Korea is a country that doesn’t value human lives.”

In the US or Europe, it is difficult to imagine a similar reaction, with feverish soul-searching connecting a disaster to national pride, shame and self worth. In the West, a tragedy typically elicits scowling at negligence, mourning of victims, and perhaps efforts to improve safety or response procedures.

Such was the case in January 2012, when the captain of the Costa Concordia, an Italian cruise liner, escaped his sinking vessel but left behind hundreds of passengers allegedly in violation of maritime law. He was soon arrested. Likewise, despite the rash of anger over Hurricane Katrina's devastation in the US ― triggered by a natural disaster, although inadequate preparation and response worsened the suffering ― people blamed government incompetence, not some defect in the American disposition.

But in South Korea, manmade disasters tend to mean more. Here ― despite pride over the nation's rapid rise from poverty in the 1960s to the ranks of wealthy, high tech nations ― a fear of blundering and inadequacy remains imprinted on the national psyche.

This may be partially a result of rapid economic development. Like in other emerging Asian nations, modern urban cities have sprouted up in a matter of years. Buildings and vehicles were constructed hastily, even if that meant sacrificing quality and safety measures. And lives were sacrificed in the process.

Some South Koreans say that rapid growth, which fostered a need to get things done faster and cheaper, made the country more prone to disasters decades ago, something of an embarrassment as it joined the ranks of developed nations in the 1990s. Yet the days of slipshod rags-to-riches growth are over.

That doesn't mean that the reactions have changed, in part due to a fragile sense of national pride. "South Korea is obsessed with … how the Korean people and nation are viewed by the outside world," explained Sung-yoon Lee, a Korea expert at the Fletcher School at Tufts University.

Lee cited other examples of how disasters afflicted the South Korean psyche. In 1995, the upscale Sampoong department store in Seoul collapsed, killing 500 people. "This incident triggered much soul-searching and collective shame," he said. "Was the South Korean nation guilty in its lunge toward industrialization and the accretion of wealth? Had it cheated, tolerated corruption, and rashly cut corners in its obsession with rapid growth?”

In 1994, a major bridge over the Han River also collapsed, killing more than 30 people. The response? South Korea's president at the time apologized to the people "out of Confucian norms of shame and the leader bearing responsibility for large-scale tragedies," Lee recalled.

More recently, many South Koreans took personally the crash-landing of an Asiana flight in San Francisco last year, which left three people dead. President Park Geun-hye personally wrote a letter to the Chinese government calling the crash "regrettable," offering sympathy for the deaths of Chinese girls in the incident.

Perhaps one of the most tenuous causes for national flagellating arose when 23-year-old, South Korean-born Seung-hui Cho killed 32 people before taking his own life in the 2007 Virginia Tech Massacre. South Koreans took to the streets with candlelight vigils and expressions of shame, feeling a sense of responsibility for their overseas brethren.

The killer, however, had lived in the US for fifteen years ― two-thirds of his life ― before the massacre.

Due to an editing error, an earlier version of this article misidentified the Sampoong department store as Soompi.